From the Jewish Chronicle

YouTube has been accused of making “blood money” by hosting antisemitic hate sermons in Urdu that were watched by the Texas synagogue gunman, the JC can reveal.  The videos have had hundreds of thousands of views — despite the JC warning the tech giant last year about clips of Jew-hatred in the language.

Blackburn-born Malik Faisal Akram, 44, who took four hostages at the Beth Israel synagogue in Colleyville two weeks ago before being shot dead by the FBI, was obsessed by two conservative Pakistani YouTube clerics, sources have disclosed.

YouTuber Dr Israr Ahmed, who has 2.7 million subscribers, has called Jews “the biggest agents of Satan” who were “akin to pigs”.

Cleric Tariq Jamil’s remarks are less inflammatory, but he claimed in a video to his nearly six million subscribers that Jews had “distorted” the holy books.

Akram helped organise a “rock star” welcome for Jamil, leader of the conservative Islamic movement Tablighi Jamaat, when he visited Blackburn in 2017.

In chaotic scenes, the local Tablighi mosque, Makki Masjid, was mobbed and loudspeakers were installed on the roof so the crowds outside could hear his sermon.

Some of the worst examples flagged last year — including a video showcasing the threat, “Jews… we are coming after you now” — were allowed to remain on the platform.

YouTube, which has been criticised for failing to moderate non-English content, has made undisclosed sums of money through advertisements attached to the antisemitic content, which continue to attract millions of views.

The Texas terrorist was particularly enthralled by the video sermons of Dr Israr Ahmed, sources told the JC.

Speaking in Urdu in one clip, Ahmed said that Jews were “the ultimate source of evil [and] the biggest agents of Satan”. They “control the banking system of the world”, he added.  In a separate video entitled “History of the Jews”, Ahmed claimed Jews had been acting against humanity for over 2,000 years. “The name of Jews became an expletive,” he said. “They became akin to pigs.”

Underneath the video, one YouTube user asked why there were no English subtitles provided. Revealingly, another replied: “I’m happy that there are no subtitles. If these are available with subtitles, this’ll be removed from here.” 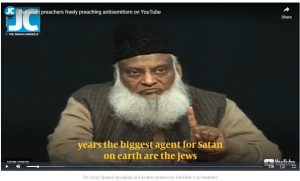 In one of the Urdu hate videos flagged to YouTube by the JC last June, Zaid Hamid, who is known for sporting a red beret, declared in a rant: “Hitler was an angel, the way he took action against Jews, the way he killed Jews.” That video, which went viral on WhatsApp, is estimated to have been viewed hundreds of thousands of times.

Akram’s family have said that he was influenced by hardliners. They said he joined the conservative Islamic sect Tablighi Jamaat – or “missionary group” – and was known to be a dedicated follower of is leader, YouTube preacher Jamil, in 2003.

Within a year, Akram was adopting its harsh Islamic strictures. He grew a long beard and began forcing his wife to wear a veil, against her wishes. According to friends and family, he started disappearing for months in Pakistan and the UK.

A Tablighi Jamaat devotee told the JC Investigations Team: “Faisal Akram was tasked to raise large donations for Tariq Jamil, who travelled from Pakistan especially for the [2017] event to speak about piety. Faisal Akram also hosted a reception for Tariq Jamil in Blackburn and went out of his way to accommodate him. He went door to door to raise cash in the name of event and kept some funds for himself.”

Akram was later banned from the Tablighi mosque in Blackburn after he went too far, calling for jihad against Israel and US inside the mosque. Or alternatively, he creamed off too big a cut for himself.

Counter-terrorism expert Lord Carlile added: “It is extremely revealing but not unexpected to show that the perpetrator was radicalised through online sermons.   It demonstrates that the term ‘lone actor’ is often misleading.  Almost all terrorists like him are part of connections often facilitated by internet service providers…”