Londongrad and Sanctions on Russia 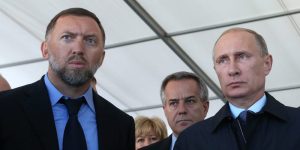 Even if Russia does not invade Ukraine, sanctions against it are well conceived, se non e vero  e ben trovato.

Vladimir Putin has been taunting the West with his enigmatic utterances of intentions towards Ukraine; he resembles a Shakespearean malevolent character, “I will wear my heart upon my sleeve, for daws to peck at. I am not what I am.” His policies are uncertain, perhaps even to himself. Yet he is aware that since World War I Western countries have tried to use the process of economic sanctions to compel transgressors to obey the law or to deter or punish attackers of the West by limiting the transgressor’s ability to trade or benefit from financial transactions.  According to the Covenant of the League of Nations signed on June 28, 1919, member states were to take action against a state making war by using the form of economic sanctions as their “primary coercive mechanism.”

For a century, economic sanctions have been threatened or used to prevent or stop aggression, but the attempt to use sanctions, especially against powerful nations like Nazi Germany or Fascist Italy, has often not been successful.  Putin is aware of this failure and argues that a fear of sanctions will not deter Russian behavior. Nevertheless, it is incumbent in this challenging crisis regarding Ukraine for the U.S., the UK, and Allies to use this economic tool to deter Russian aggression.

On February 1, 2022, Prime Minister Boris Johnson, left London after the fiasco of the “Partygate” scandal of lockdown-busting parties in Downing Street, and the official report on them. He was warned by the report by a senior civil servant named Sue Gray of the need to observe the high standards expected of those working at the heart of government, and that excessive consumption of alcohol was not appropriate in a professional workplace. Thus, reinforced politically and morally, Johnson travelled to Kiev to meet with the Ukrainian President Volodymyr Zelensky.  At their meeting, Johnson commented on the more than 100,000 Russian troops on the border of Ukraine and Russian menacing mobilization, a demonstration of hostility. That deployment is far more than the 30,000 troops Russia sent to invade Crimea in 2014. It goes without saying., he said, that a Russian invasion of   Ukraine would be a political and humanitarian disaster, and for Russia, a military disaster as well. The UK agreed that Ukraine was committed to sovereignty, independence, and territorial integrity within its internationally recognized borders. It recognizes that Russian aggression threatens regional peace and security and undermines the global order.

Johnson’s important statement was that alongside other countries, the UK like the U.S. is preparing a package of sanctions, and other measures, to be enacted against Russia the moment its troops cross further unto Ukrainian territory. The UK has already doubled its military contingent in Estonia, and increased UK air operations on the Black Sea region to which it will send a guided missile weapon. The UK has already supplied Ukraine with anti-tank missile systems and missile warships, minehunters, and help in building naval bases in the Black Sea and Azov Sea.

As a global financial center, the UK is in a unique position to act against threats to the international order.  The government is planning to introduce new legislation to increase the UK’s sanctions in response to Russia’s suspected actions against Ukraine, and to allow the broadening of sanctions, some in existence, against individual and businesses.

The UK will expand its activities after a government report on “Moscow gold.” The Foreign Affairs Select Committee of the House of Commons has begun an inquiry into the significant amounts of funds, “dirty money” from abroad, which is flowing into Britain.

The huge scale of Russian investment in London, the heart of global finance, has led to the capital city being called “Londongrad.”   Russian oligarchs have poured into Britain and are purchasing property and businesses and recycling illicit finance through the London financial laundromat. The new emphasis therefore is that the best way to defend Ukraine is to end the influence in the UK of Russian wealth.  The talk is of enchainment of sanctions, including targets of financial institutions and energy firms.

The UK is planning to include Russian oligarchs and businesses linked to Moscow, or those playing a role in decision making, as part of any sanctions program.  This would prevent Russian access of banks, state companies, would prevent travel, and control financial dealings.  This follows the U.S. decision in 2014 to sanction businesses with close ties to the Kremlin after Russia invaded Crimea. and again in 2018 after allegations of Russian interference in U.S.  elections and cyber-attacks.

The UK also imposed sanctions on 180 people and 48 companies because of the Russian invasion of Crimea, but the Russian influence in Britain remains, such as helping raising money for   Gazprom, the large state-owned multinational energy corporation, whose headquarters are in St. Petersburg.  The new plan is to impose sanctions on any company or person   linked to the Russian state. The assumption is that the Russian money has fostered illicit finance   and corruption in Britain.

Indeed, the reality is that London is the residence or refuge of many Russian billionaires with links to the Kremlin: they include some of the wealthiest men in UK.  Johnson has warned that sanctions would be enhanced on anybody or person, financial institutions, energy firms, wealthy individuals, acting in the strategic interests of the Russian system.

A few of those Russians who constitute significant challenges to the British and the global economy may be mentioned.

Alisher Usmanov, perhaps the wealthiest Russian, and ex-fencing champion, is worth more than $ 18 billion from a variety of enterprises, gas and telecons, the giant Mega Fon, large mobile phone and telecon operator, metal, iron ore, nickel, and steel, and mining companies, head of a subsidiary of Gazprom, and a Moscow newspaper. Until recently he owned 30 per cent of Arsenal Football Club, and now has links to other British football clubs.  He has luxury homes in Highgate, north London, and in Surrey. He is a friend of Putin and has received a number of Russian awards.

Oleg Deripaska, oil tycoon, once thought to be Russia’s richest man, but now worth only $4 billion, and connected with energy and aluminum companies, is a close associate of Putin, who speaks of him as his “favorite industrialist.” He has had contacts with British politician, and also in the U.S. with Paul Manafort, suggesting possible interference in the 2016 presidential election. Deripaska has two London homes in Belgravia.  He helped the Kremlin conduct operations to exert influence abroad.

In the U.S. he was blacklisted, along with the heads of 12 other business firms, in 2018 by the U.S. Treasury Department over alleged internet crimes.

Mikhail Fridman, born in Kiev, Ukraine, successful businessman, investor, philanthropist, worth $15 billion, co-founded the Alfa group, the multinational Russian conglomerate, and the Alfa-Bank,one of private banks in Russia, is involved in a number of enterprises and investment banks, and is actively involved in public affairs. His main residence is in London. bought a house in north London for $80 million and is thought to be currently the richest man in Britain.

Andrey Kostin, by comparison a poor man of only $500 million, though he maintains private jets and a super yacht, is president and chairman of VTB Bank, Russia’s second largest bank, controlled by the state, one of the world’s largest companies, and heads a London based subsidiary. He helped sponsor the London Chelsea flower show, which was short of funds. Kostin is a frequent guest on U.S. TV programs.

Igor Shuvalov, $300 million, politician, former first deputy prime minister and still chair of the State Development Corporation, reported as being very close to Putin, his “chief commander and an engine in charge of it all,” is involved in economic policies.  He has two apartments in London, one  a penthouse in Westminster, worth $ 13 million, overlooking the ministry of defense.  He also has a $11 million apartment in Moscow. A lawyer turned politician, he is usually rankled no. 3 in the Russian government, after Putin and the current prime minister.

In all the London stock exchange is the leading foreign trading platform for Russian companies with 60 companies and a combined wealth pf $80 billion, that include    Lukoil, Gazprom, and Rosneft. The UK has become a major location for Russian oligarchs and their wealth. The new UK proposals for sanctions and control the flow of Russian money through the markets in London will help counter Russian aggression.