Didsbury Mosque in Manchester; where the family of Manchester Arena bomber Salman Abedi would worship (when they are not in Libya). His brother was a tutor, his father a quiet man with a ‘beautiful voice’….

And then we found out about the visit of Abu Quatada.  And the videos of Abdullah Hakim Quick.

And the sermon, only days before Abedi bought the ticket for the Ariana Grande concert where he murdered 22 music fans (mostly young girls and their mothers), which sounded even to the BBC like a call to jihad. But apparently that was badly translated and nothing to worry about. From the Manchester Evening News

Counter terror police who investigated the contents of a sermon delivered by an Imam at Didsbury mosque say ‘no offences have been committed’. A BBC investigation revealed that imam Mustafa Graf, from Chorlton, referenced ‘jihad’ and ‘mujahideen’ during a speech delivered at the mosque, on Burton Road, in West Didsbury.

However bosses at the mosque said the comments, which were recorded onto a tape, were taken out of context.

Senior investigating officers now say they have determined that ‘no offences have been committed’ following consultation with the Crown Prosecution Service and after receiving expert advice. (I’d like to know who that was – the CPS’s Islamic chaplin?)

Though people may have been concerned at the ‘tone’ of the speech, mosque trustees are committed to dealing with ‘extreme’ behaviours, they said.

In a joint statement, Manchester City Council and Counter Terrorism Policing North West said: “We recognise that mosques have a very important and valuable role to play within our communities and we will always seek to work with trustees to strengthen those community relationships.

The BBC spoke to two Muslim scholars who reported that Mr Graf said: “We ask Allah to grant them mujahideen – our brothers and sisters right now in Aleppo and Syria and Iraq – to grant them victory.” It was also claimed he said: “Jihad for the sake of Allah is the source of pride and dignity for this nation.”

…the mosque’s trustees said Mr Graf was highlighting the plight of Syrians after chemical bombings in the country. They said his use of the words ‘jihad’ and ‘mujahideen’ had been misinterpreted. A mosque spokesman said at the time: “Jihad is an Arabic word meaning to struggle or strive for good, and it is often used incorrectly. . . The English translation said something like ‘you must all give to charity’. But instead of translating the full sermon they [the BBC] have translated all the Arabic words around jihad, but left that as it is…” 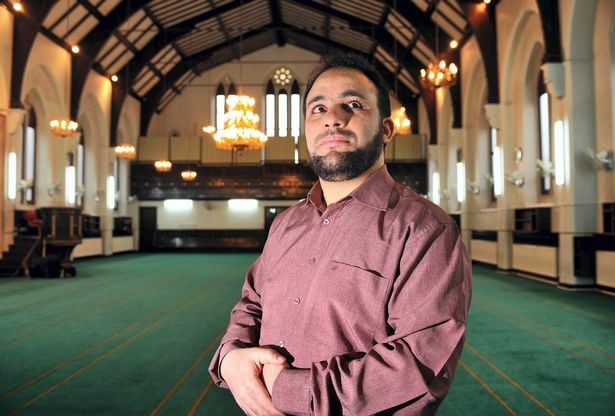 Mustafa Graf inside what was once Albert Park Methodist Chapel, looking like butter wouldn’t melt in his mouth.

The BBC previously rejected claims that they had mistranslated the sermon, which they say was spoken in English.

That is easily confirmed or refuted. It is common to add subtitles in English, even if English is being spoken, if the speaker has a regional accent, or is mumbling. Another Arabic word the BBC might want to look into is taqiyya.