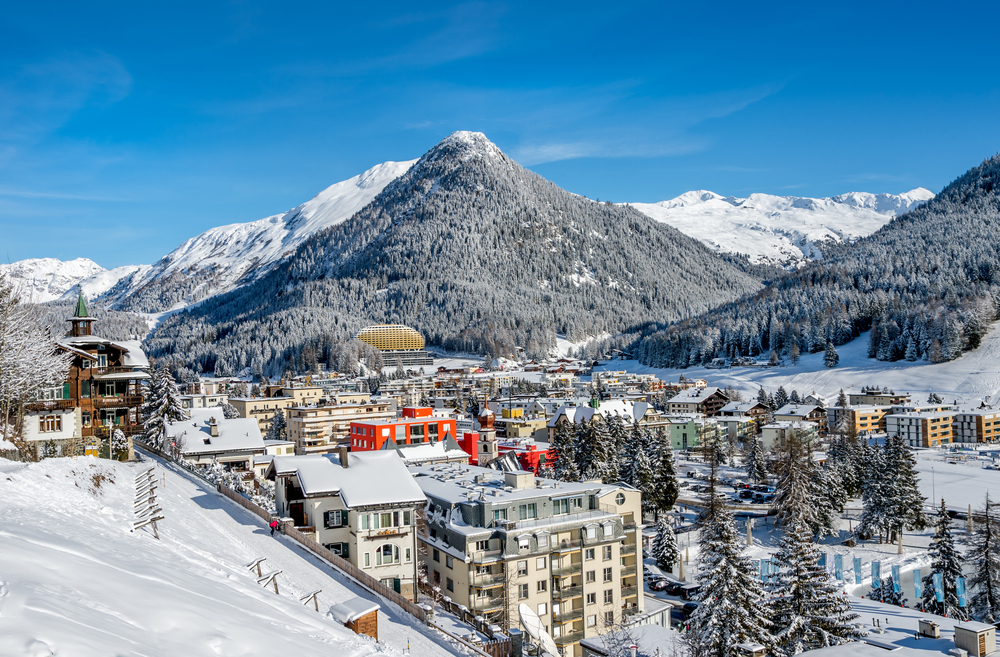 A major argument for the corporate tax cuts by the Trump administration that went into effect on January 1, 2018 is that they would lead to greater business investment. So far they have propelled a rapid increase in the stock market as well as inducing Apple, the world’s largest company by market value, to bring back offshore cash and to invest more in the U.S.

Interestingly, this assertion of American economic nationalism, implementing the thrust of President Donald Trump’s Inaugural speech of January 20, 2017, is occuring at a moment of global economic growth when all 45 major economies are growing at the same time, uncommon synchronicity, and the global growth was 3% in 2017.

Discussion of that growth is taking place at the 48th annual meeting of the World Economic Forum, WEF, that opened at the Swiss mountain town Davos, on January 23, 2018 . The late Harvard political scientist Samuel Huntington, rather unkindly, coined the term “Davos Man” to indicate the kind of person who goes to the WEF meetings: “they have little need for national loyalty, view national boundaries as obstacles that thankfully are  vanishing and see national govermments as residues from the past whose only useful function is to facilitate the elite’s global operations.”

Certainly, Davos is the meeting place of the world’s rich and the economic and politically powerful individuals supposedly linked through transnational institutions and networks. This year as usual, it is the venue for several thousand people, from 70 countries: heads of state, leaders in business, academia, social organizations, industrialists, and culture, not forgetting Hollywood and Bollywood. This year glamorous performers, British singer Elton John and  Australian actress Cate  Blanchett, are being given the WEF annual Crystal Award.

Participants at Davos engage in networking, schmoozing, and displays of ego on an international level, but more seriously take the opportunity for discussions of global economic investment, multidollar deals, multilateral trade agreements, and efforts to attract foreign investment. Like most international organizations, Davos has been and remains dominated by men, though female representation has been increasing slowly, now 21% in 2018.  Noticeably, and deliberately at this moment of Me Too, women in 2018 are in more prominent positions since all the seven co-chairs are women.

The stated official theme of Davos 2018 is “creating a shared future in a fractured world.” It suggests the tension between efforts to sustain a liberal global order and development, tackling and solving issues on a global basis and a stable environment, and, on the other hand, the competing nationalist assertions, protectionism, state interventions that affect other countries, outbeaks of populism, and concern about globalization.

An initial problem facing the discussion of the ambitious idea is that the “fractured world” is changing as important developments are taking place in different parts of the world. Asia, the world’s fastest growing economic region, now accounts for half of the world’s growth. The Chinese economy grew at the rate of 6.9% in 2017. Most remarkable is the rise of India, now the fifth largest economy in the world, after the US, China, Japan. and Germany, calculated in terms of purchasing power parity.

This economic growth has prompted nations to take a more prominent place in shaping world’s rules and insututions. Indian success has led Indian Prime Minister Narendra Modi to suggest his country is entitled to be made a permanent member of the UN Security Council, and to be part of the 48 member Nuclear Suppliers Group that seeks to prevent nuclear proliferation by controlling the export of materials that can be used to manufacture nuclear weapons.

The Davos task of a “shared future” remains complex because of the existing factors of inequality within and between nations, the persistent inequality between men and women, and the intensification of populism, political nationalism, the decline of liberal democracies, and economic protectionism.

All the major economies of the world grew by more than 1.5% in 2017, aided by the decline in oil prices, and that growth is expected to continue. The WEF optimistically puts it at 3.9%. Globally, wealth rose by 6.4%, with gains in equity markets and in non financial assets. Wealth growth was greater than population growth.

The world’s economy is growing, but a major problem has been made clear by a report from Oxfam released on January 20, 2018 of the increasing inequality in the world in which 50% of the population saw no increase in their wealth, while there were large increases in developed countries. Oxfam, the global organization concerned with problems of poverty, sees the economic picture not in terms of a thriving economy, but as a sympton of failure for millions. It calls for tackling problems that cause poverty.

Perhaps the most startling revelation of the Oxfam report is that 82% of the wealth generated in 2017 went to the richest 1% of the global population, while 3.7 billion people, the poorest half of the world, had no increase in their wealth. According to a report by the Credit Suisse Research Institute, 42 people in the world now own as much as the 3.7 billion.

One aspect of the increase is that the number of billionaires rose at rate of one every two days. Calculations are that there are now 2,043  $ billionaires in the world, and that the richest individuals added $1 trillion to their wealth in 2017. Not surprisingly, 9 out of 10 billionaires are men.

On January 26, 2018 President Trump is supposed to address the Davos meeting, for him an improbable event encountering the global economic elite he has disparaged. In his Inaugural Speech Trump proclaimed that every decision on trade, on taxes, on immigration, on foreign affairs, will be made to benefit American workers and American families. The moment of truth is near. To what extent will the Trump policy of “America first” contend with or adhere to the global establishment with free trade, open borders, and multilateral diplomacy? The choice will define the American role in the world, politically and economically.