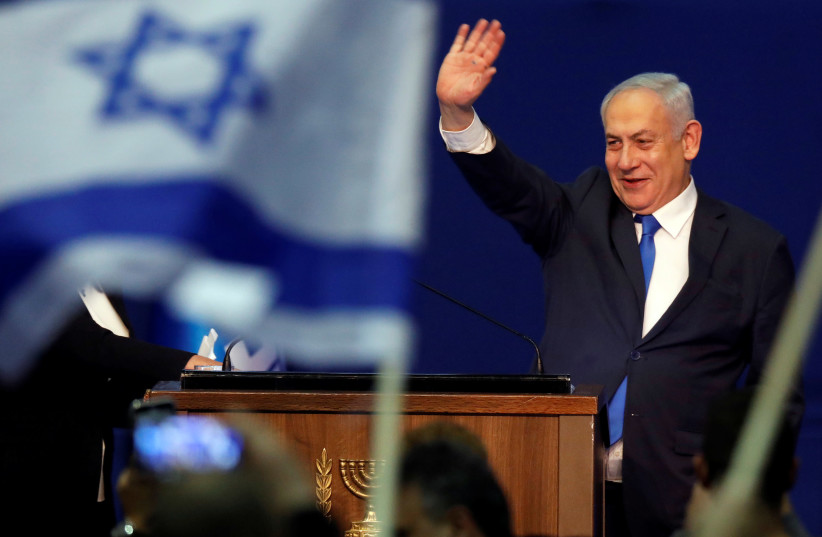 Stormy weather, don’t know why there’s no sun up in the sky. For our electoral majority, one is enough. Time after time, I tell myself I’d be lucky to get that majority.

The State of Israel on March 2, 2020 had it third parliamentary election for the Knesset in under a year. Like the two previous occasions it failed to end with a party or party group gaining an overall majority and thus able to form a government, either on its own or in a coalition.

The existing prime minister Benjamin Netanyahu at first claimed victory but his coalition won only a plurality, 58 of the 120 seats in the Knesset, four short of an overall majority. Consultations have now begun to determine how a new government can be formed and who is to lead it as prime minister.

Though Netanyahu did not fully succeed he must be seen as a remarkable politician, one who failed to win three election in outright fashion in a single year, who has been indicted on three counts, fraud, breach of trust, and bribery, and is facing trial on March 17, 2020, but who has survived. Indeed, he has denied any criminal activity and has responded with talk of a “witchhunt” by police and the media against him. Though Attorney-General Avichai Mandelblit, appointed by Netanyahu, recommended in February 2019 that Netanyahu be indicted it did not seem to change minds of voters since has he led in public opinion polls after that.  The filing of allegations of corruption apparently did not change views of citizens, clearly not sufficiently to  make people  vote for parties other than the coalition led by Netanyahu. This is all the more significant since the election campaign was not so much focused on ideological differences between the main parties, since the main opposition accepted many similar views, but on the personality and alleged misdeeds of Netanyahu.

In the March 2020 election almost 30 parties ran candidates. The turnout was 71% of the 6.4 million eligible voters for the Knesset which has 120 mandates, each representing 34,600 votes. Voting is for parties, not individuals. Only the parties getting 3.25% of the total vote can get seats in the Knesset.

The results are as follows:

Two political blocs dominated. The Right-Religious bloc (Likud, Shas, UTJ, Yamina), a combination of a secular, Likud and Ultra-Orthodox and far right parties, and embracing  both Ashkenazi Jews descending from Europe, and those coming from North Africa or the Middle East, received 58 seats.  The Center-Left bloc (Blue and White, Labor-Gesher-Meretz) got 39.

Netanyahu, now 70, the longest serving prime minister in Israel’s history, led Likud to become the largest party, but his bloc was unable to win an overall majority. He had campaigned on a few major issues; imposing sovereignty in the West Bank, Judea and Samaria, peace with Arab states, eliminating the threat from Iran, safeguarding the defense alliance with the U.S. Bibi reinvented himself as Joe Biden did in South Carolina. Bibi appealed to Arabs, spoke of repeal of the law to demolish houses which required permits. He suggested direct flights to Saudi Arabia, though Israel does not have official diplomatic relations with the country. He outlined plans to build more than 6,000 housing units in east Jerusalem,  and another 3,500 units in an area just outside east Jerusalem.

Benny Gantz , former chief of the Israeli army, did not differ much on key issues, including occupation  of the territories , and supported as does Bibi the proposed Trump peace proposal. However, he ran on concepts of personal honesty and integrity, declaring that Bibi was evading trial, and was responsible for spreading malicious rumors, such as the charge that Iranian intelligence had infiltrated Gantz’s personal cell phone when he was head of the military.

Most challenging for the Israeli establishment is the increasing political success of Arabs. The Arab Joint List, formed in January 2015, has attempted to be and has gained support as the spokesmen for the Israeli Arab minority.

Arabs have been voting in higher numbers. Their turnout in 2020 was 64.6%, compared with the general national turnout  of 71%, only 6 points difference. In April 2019 it had been 49.2% while the general poll was 68.5%, and in September 2019 it was 59% compared with the 69.8% general turnout.  A number of factors are significant. One is that over 88% of Arabs voted for the Joint List, which got 15 seats in March 2020, the highest number it has ever obtained. In the past about a quarter of Arabs voted for Zionist parties such as Blue and White, Meretz, or Labor. Another is that it was noticeable that Bibi was more cautious during the campaign  in lowering the level of incitement against Arabs, and even quoting the Koran, though this stance was not really successful, and had overtones of patronizing.

The Arab campaign was active, including messages from loudspeakers in mosques, usually used for calls to prayer, and arrangements for transport to convey Arabs living in the Negev desert and the Bedouin villages in the south.  They used social media in the call to vote. The Arab campaign focused on women and young people.

Arab leaders concentrated on two main issues; civil issues, welfare, education, housing, and ending the occupation; and increasing the role of the Arab minority in Israeli society. Recent demonstrations by Arab leaders have focused on the neglect by police of violence against Arabs.

Interestingly, in March there was an increase in the number of Jewish voters who voted for the Joint List which ran campaigns in Hebrew and Russian to attract Jewish voters, those who claim to oppose Israeli occupation. Evidently the Israeli political system must take greater account of the growing political strength of the Arab minority.

What options are available in the convoluted Israel political system?  Forming a minority government by Likud, supported by its 58 votes seems improbable. But so does an  attempt to form a coalition, and it would seem absurd to call for yet another election, the fourth in little more than a year. Differences abound. The Arab Joint List will not support any government which contains Avigdor Liberman, former ally of Netanyahu, and leader of a small nationalist group and so-called kingmaker. Likud will not support a coalition with a party not in its far-right religious group. Opposition leader Benny Gantz may hope to form a minority government, but his tactic to pass a law preventing an individual member of the Knesset from forming a government seems petty if not undemocratic. It is unlikely that President Reuven Rivlin can invite Netanyahu to form a government since he is facing a felony prosecution.

Perhaps the solution is suggested by the White Queen to Alice, “The rule  is jam tomorrow and jam yesterday, but never today.” If Joe Biden can manage a dramatic turn around in just three days, perhaps Israel can do likewise in the near future. And worse Israel may be yet: the worst is not so long as the country can say  “This is the worst.”