EXCLUSIVE: Anthony Mundine claims Aboriginal Australians are MUSLIM and share identical beliefs – as boxer admits he turned to Islam because Christianity was too confusing for him

From the Australian Daily Mail. Where one of the top comments is “wouldn’t take much to confuse old Anthony”

Anthony Mundine has claimed Australia’s Aboriginal people are Muslim, with almost identical belief systems between Islam and the indigenous Dreamtime. The former rugby league star-turned-boxer switched faiths in 1999 and has since converted troubled league stars Sonny Bill Williams and Blake Ferguson to Islam.

Now in a new video interview with the Islamic Museum of Australia, the Aboriginal activist has explained what drew him to the core principles of Islam. He has previously . . . said homosexuality was against Aboriginal Dreamtime beliefs. 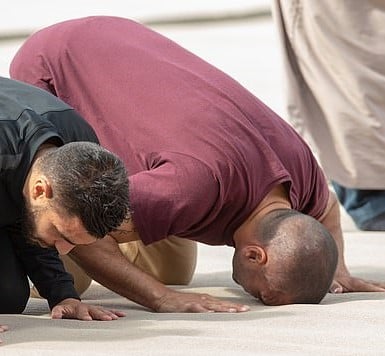 ‘Our traditional law is pretty much identical to Islam,’ the father of four told interviewer Mustafa Fahour.  ‘There’s roles for women and men, what you can and can’t do, social system, justice system… Pretty much all also those are sort of the same. And I found in Aboriginal lore, the belief was in the one God, the oneness of God, the One God.

He said he abandoned his Church of England roots to turn to Islam because of the Anglican links to colonisation, and because he found Christianity too complex to understand. ‘The country was colonised and Christianity was forced upon our people,’ he said. ‘I wanted to really delve in and see what what their core belief is.  They’re believing in the Father, Son, Holy Spirit, whatnot. Three sort of separate, identities being, not three, but one.  And just really, it was confusing for me.’

The controversial star was slammed in 2001 for his comments in the wake of the 9/11 attack on the Twin Towers when he said: ‘They call it an act of terrorism, but if you can understand religion, and our way of life, it’s not about terrorism.  It’s about fighting for God’s law, and America’s brought it upon themselves.’

Now he insists he wants to fight racism and oppression and hopes to be inspired by Malcolm X to make an even greater impact on society. I’ve always been, not a fan, but a supporter of Malcolm X,’ he said.  Because of what he stood for – his morals and of injustice and oppression on his people – that’s what I wanted to do down here with my profile, my success…”

PrevA Response to the Proposal for a Pandemic Amnesty
Peterson: Russia Vs. Ukraine Or Civil War In The West?Next