With the Democrats’ Russian obsession having dwindled to absurdity, President Trump can continue to move the country forward. 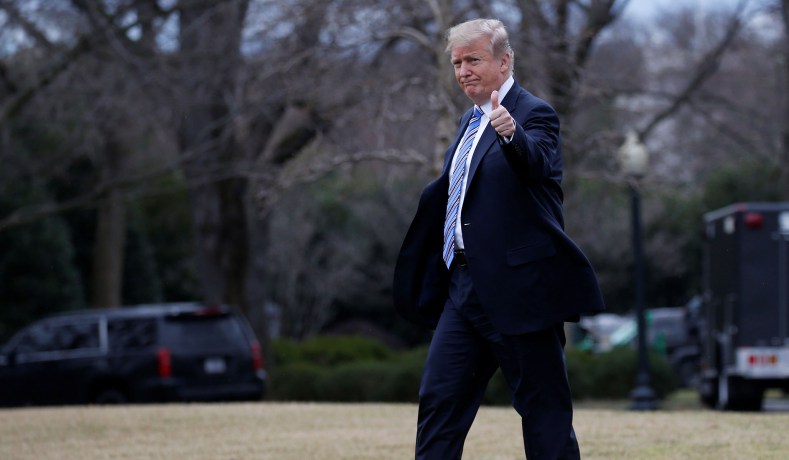 It is both dismal and amusing to see the rationalizations of the diehard Kremlin collusionists after Robert Mueller’s spurious indictment of the 13 Russians who will never encounter the vagaries of U.S. justice. The charge of conspiring against the United States is nonsense, and the whole ambiance of the investigation now is that of a phantom consolation prize for the absence of a crime, a victim, or a culprit, all amplified by the hollow sanctimony of an official America that has meddled countless times in the elections of other countries (usually for the general good of the Western alliance). The desperation of the Trump impeachers is piquant: This indictment doesn’t cover hacking — where might that lead? And the fact that Deputy Attorney General Rosenstein said, “This indictment refers to no Americans,” and that it contains no allegation of affecting the election result or of collusion by Americans, may mean that perhaps another indictment will. It is to this pathetic wisp that the New York Times’ Tom Friedman’s claim of a Russian assault on American sovereignty equivalent to Pearl Harbor and 9/11, and Senator Mark Warner (D., Va.)’s thousand Russian agents delivering Wisconsin to Trump on election night, have been reduced.

It is all, and always has been, nonsense. The Russian activities Mueller has attacked began before Trump had announced his candidacy, were favorable to Sanders and the Green candidate, Stein, as well as to Trump, and were almost entirely Internet advertisements decrying the state of the country in terms many Americans would sadly endorse — violence, corruption, poverty, crime, racism, etc. — in a presidential campaign in which the major candidates spent $2.5 billion, and Mrs. Clinton spent the unheard-of sum of $250 million on attack ads. This was her version of “going high when they go low”: She was obviously speaking of money spent, not moral tone. And that was without counting the 10 to 12 million dollars the Clinton campaign contributed to assembling the outrageous Steele dossier, which Mrs. Clinton cites in her book as evidence of the ”treason” Trump committed with Russia to cheat her of the election. Trump critics are correct to say that this piffling pseudo-prosecution is not “a complete vindication,” in that it is not an explicit exculpation, but it is a stark confession of the extent of the collusion fiction.

When the rabidly Americophobic British newspaper the Guardian is reduced to finding evidence of collusion in Trump’s supposed generosity to Russia, the Red Queen is made to sound like Louis Brandeis. We must be fairly close to the point where it is impartially recorded that Trump–Kremlin collusion was a nasty fairy tale commissioned and paid for and carpet-bombed on the media by the Clinton campaign, and used to infect and mislead the Justice Department and the FBI, by senior Clinton-campaign and Obama-administration officials. The Steele dossier remains the only visible justification for a false Foreign Intelligence Surveillance Act warrant against Carter Page and, incidentally, the Trump campaign; and for the Mueller investigation itself, even though that investigation was prompted by fired FBI director James Comey with an illegal leak to the New York Times of a memo of contested accuracy that was probably illegally removed government property. Mueller arrived after Comey had dismissed the Steele dossier as “malicious and unverified” and after the Trump-hating Clinton-helper Peter Strzok, whom Mueller inexplicably recruited, had reluctantly concluded that there was “no there there.”

With this Russian indictment and whatever flailing about Mueller may commit over hacking and WikiLeaks, Mueller can make his gesture to the fact that the Russians nibbled ineffectually at the edges of the 2016 election, and use that as his cover to withdraw from the whole misconceived collusion foolishness in which the United States is being reduced to a laughingstock for the whole world. Or, Mueller can exercise the plenitude of his mandate and unearth the proportions of the chaos caused by the Steele dossier (which the egregious Senator Warner assured us “is taken seriously by the British, our ally”). It is an astounding tale that is emerging of Clinton political mischief tainting the entire justice system and misleading tens of millions of Americans to imagine their political system was being manipulated by foreigners and might have produced an illicit presidential-election result. This is the exposure that must be made, and while I would not necessarily favor prosecuting them all, Mrs. Clinton, Comey, deputy FBI director McCabe, and quite possibly former senior Justice Department officials including Loretta Lynch and Sally Yates, have committed offenses that put them in the danger zone of indictable acts. Instead of Keystone Kops charges against untouchable Russians and shock-and-awe intimidation of prior bit-players for alleged tax offenses and minor indiscretions, Mueller should lay this immense, scandalous rotten egg before the country. If he can’t face that challenge and service, he should shut down this charade so that Attorney General Sessions can end his recusal and we can bring on the main event and identify the authors of this monstrous farce.

As his greatest problem melts, President Trump has an opportunity to build on the new need of Democrats to be more cooperative than their mindless obstructionism until recently has permitted. To build on the historic success of his tax reform, Mr. Trump should cut across party lines and do the right and surprising thing, as President Lyndon Johnson did with civil rights, President Nixon did with China, and President Reagan did with arms control. He should reaffirm the right of all qualified people to own handguns and rifles, but sharply tighten access to automatic weapons, require licenses to carry concealed weapons, fund substantial security in all schools and for public meetings, including religious services and concerts, and intensify the collection of relevant behavioral information and response to it (an area bungled by the FBI and local authorities in the Parkland, Fla., massacre last week). Gun supporters cannot justify a laissez-faire legal framework, but will continue to be able to collect and enjoy guns if they meet high but reasonable criteria. This might not have interdicted the Las Vegas murderer, but would have flagged the Parkland misfit. All unauthorized firearms should be seized.

As his greatest problem melts, President Trump has an opportunity to build on the new need of Democrats to be more cooperative than their mindless obstructionism until recently has permitted.

The other march the president could usefully steal legislatively, and bring the Democrats into formation with him, would be to increase the infrastructure proposal to the $4.5 trillion that is generally recognized to be needed, and fund the increase from anticipated reductions in the gasoline price resulting from increased U.S. production, by maintaining the present price and applying the differential to this program. The anti-Trump resistance is collapsing and we are almost back to normal political blocking and tackling. With these notches in his belt, he would have a chance of complete immigration and health-care reform in the second half of his term. There will be plenty of opportunity for the president to gloat about the collusion idiocy; now is the time to make Washington work and build credentials as a negotiator and champion of the system, and not just the great outsider. He has brought down the walls like Joshua at Jericho; now is the time to bury gridlock and rebuild public confidence that America’s legislators are not just the corrupt, ineffectual lobbyists-in-waiting that a great many Americans, with some reason, think they are.