Two important and worrying articles from the Times about the subversive activities of Hizb ut-Tahrir in Birmingham.

Hizb ut-Tahrir, whose purpose is to re-establish the caliphate in the Middle East with Sharia law, has relocated to the Sparkhill area of Birmingham, an inner-city neighbourhood that is linked to more homegrown terrorists than anywhere else in the UK, (even more than Dewsbury, which is run by Tablighi Jamaat) which has been home to several convicted terrorists, including the UK’s first al-Qaeda inspired terrorist.

The organisation used to be based in London, but is now focusing in Birmingham; anti-extremism officials and local charities are alarmed. They hold a  weekly meeting advertised on Facebook via the innocuously named “Friday Circle”.

In July they launched a youth roadshow which give the impression of an innocuous community organisation; smiling activists in bright orange T-shirts. The name Hizb ut-Tahrir isn’t mentioned, and they don’t use the Islamic state flag.

The name of the youth movement, “If you stand for nothing, you’ll fall for anything”, reads like the chorus in a pop song.

A group photo at a park in Sparkhill, inner Birmingham, showed at least 50 activists in campaign T-shirts holding bright banners with phrases such as “Fighting for the turf” or “Standing up for the ummah”, an Arabic word meaning community. All of which is obvously aimed at the young, the impressionable and the idealistic. 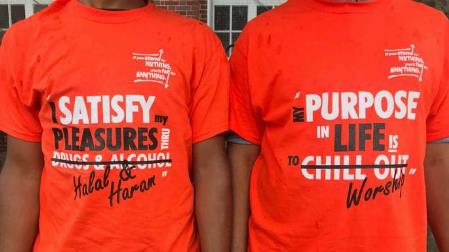 Netflix, Love Island and even Joey Essex’s comb-over are the subjects of fliers. One tries to attract young men with the phrase “Wouldn’t mind a bit of that!” before complaining about “women with more make-up than clothes”. It says those that engage in casual sex live a “life no different to that of an animal”.

Although much of the material handed out is moderate, The Times has found that members of the youth campaign are pushing more extreme views online. Some back calls for a caliphate. At one meeting, an activist in a park told locals that freedom was a “dangerous” western idea.

One Hizb ut-Tahrir leaflet seen by this newspaper called on “armies to mobilise” against Israel. Yahya Nisbet, a Muslim convert, has recently urged Muslims to “call for the complete liberation of the Blessed Land (Palestine) and the removal of the Jewish entity”. He also told a Sparkhill audience that Muslims “have superior power” which was being given up “to an inferior power who is noticeably weaker”. The group has called on UK Muslims to “exert pressure on the schools that seek to undermine the Islamic values”.

Meetings are now held weekly in a Unity Centre underneath a carpet warehouse in Sparkhill. Anti-extremism officials believe secret meetings are also taking place. Of course they are.

Many countries ban Hizb ut-Tahrir. Britain has muttered and mumbled about following suit, but Tony Blair took no action. David Cameron criticised him for this while in opposition but did nothing once in power. And the worst Home Secretary in recent years, on the matter of protecting British interests (by keeping out or deporting genuinely dangerous people) Theresa May, is now becoming the most ineffective Prime Minister in the same area.