Two very good articles in the Telegraph tonight. Unfortunately both behind the paywall so I cannot bring you much from either. However the important thing is not what the writers say, as that is very similar to what some of us have been saying for some time; it is that they are saying it now, in a national newspaper. The article about Anjem Choudary has comments that I believe can be seen by all readers.

Will Heaven  Director of Policy at Policy Exchange, who worked for Michael Gove at the Ministry of Justice in 2016 writes on the subject of Choudary and his imminent release,

Choudary was sentenced to five and a half years for encouraging British Muslims to join Islamic State. Jurors heard that he had sworn an oath of allegiance to the terrorist group, a moment described by the Metropolitan Police as a “turning point”, since at last they had evidence that he had stepped over the line into outright criminality.

As Policy Exchange’s recent report, Aiding the Enemy, noted however, this sentence was “manifestly inadequate in view of his betrayal of his country by serving as a recruiting agent for a group that intends to and has carried out attacks on the UK and which UK forces are fighting abroad”. Choudary also induced others to betray their country, corrupting young British Muslims and sending them to their deaths in Syria. It was not the fault of the judges that they could not give him a harsher sentence, though he clearly deserved one. They had their hands tied by existing law.

What the report authors – including a Tory and Labour MP – argued for was that the law should provide for more severe punishment in view of the true nature of the wrong: a new offence, which would revive the ancient law of treason. This change is urgently required. Between 2006 and 2017, some 193 people were given prison sentences for terrorism offences – 80 of whose sentences are due to expire by the end of this year. (The figure actually understates the number of convicted terrorists due to be released in the near future, given that prisoners can be released half way through their sentences.)

A new treason law would specify that it is an offence to aid a state or organisation that is attacking Britain or preparing to attack the UK, or against which our Armed Forces are engaged in conflict. Crucially, those convicted of treason should be sentenced to life imprisonment, which would reflect the gravity of the wrong of betrayal, deter others, and incapacitate the offender.

The existing treason law would actually work. However a law dating from the 14th century would probably benefit from modern language; few these days have the patience with the language of Shakespeare so something two centuries earlier would be derided.

Telegraph reporters have written the other item 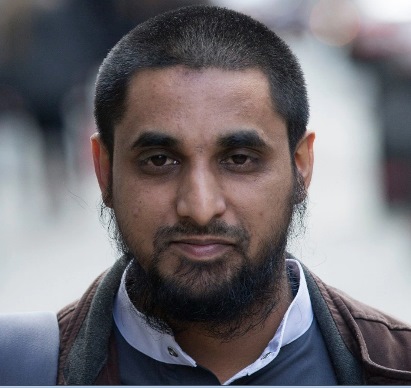 Mizanur Rahman, 35, was jailed with Choudary after the pair were found guilty of drumming up support for Islamic State. They have both served half their five and a half year sentences and will be released next month. But while Choudary, 51, had groomed Rahman and recruited him to al-Muhajiroun, a now proscribed terrorist organisation, it is feared the younger man will be more dangerous when freed. Rahman, from north London, was groomed at 17 by Choudary and the exiled hate cleric Omar Bakri Mohammed. He studied under both men.

One source said: “We will have to wait and see what happens when they are released. It’s fair to say that Rahman is more computer literate than Choudary and younger and more energetic. That is a big worry.”

It is understood a major concern is Rahman’s close links to Siddhartha Dhar, a childhood friend, who fled to Syria where he replaced Mohammed Emwazi – better known as ‘Jihadi John’ – as Islamic State’s public executioner when his fellow Briton was killed in a drone strike.

Dhar – dubbed ‘Jihadi Sid’ – is the most high profile British member of IS still thought to be alive and there will be inevitable fears that Rahman will try to make contact with his friend. Rahman is responsible for radicalising Dhar, who has been designated a global terrorist by the US State Department.

Chris Phillips, former head of the National Counter Terrorism Security Office, said: “I think it is very scary. What we know is that people around Rahman have gone off and done terrible things. They are very dangerous. Unless we change the laws we cannot do anything with these guys. We need to make control orders much stronger. The police have so much to do and are in a near impossible situation.”

A Ministry of Justice spokesperson said: “Public protection is our priority, and extremists released on licence are closely managed by the National Probation Service working with police and other agencies. They are subject to very restrictive licence conditions, which could include living in an approved premises, restrictions on movement and non-contact orders. Failure to adhere to these conditions will result in offenders being returned to prison.”