A jihadist who plotted a gun and knife rampage at busy London tourist sites has been jailed for life following a five-month undercover operation. Mohiussunnath Chowdhury planned to target popular attractions, including Madame Tussauds, the gay Pride parade and an open-top sightseeing bus, using a gun, knife and van, last year. 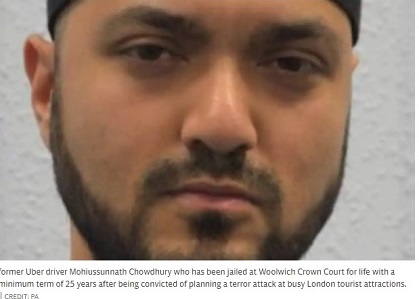 The 29-year-old former Uber driver from Luton, who was said to be driven by “dreams of martyrdom”, was arrested three days before the Pride parade in summer 2019 after he unknowingly revealed his plans to undercover police officers.

Chowdhury bragged to them about deceiving a jury which cleared him of a sword attack on police outside Buckingham Palace at a previous trial at the Old Bailey in December 2018. But the jury at a separate subsequent trial found him guilty of terror offences in February, little more than a year later.

Chowdhury was handed the life sentence at Woolwich Crown Court on Thursday, with a minimum term of 25 years.

Appearing in court wearing a grey tracksuit and face mask, he was sentenced for convictions of engaging in conduct in preparation of terrorist acts, collecting information likely to be useful to someone preparing an act of terrorism and disseminating terrorist publications.

But defence lawyer Simon Csoka QC suggested Chowdhury’s behaviour had been a “delayed teenage phase”. . (he had) previously argued that the university drop-out was a “pathetic little man” and an “attention-seeker” who “talks and talks, but doesn’t do”.

But prosecutors argued at trial that Chowdhury desired to “unleash death and suffering” on non-Muslims after being influenced by sermons from preachers like al Qaida’s Anwar Al-Awlaki. Chowdhury told one undercover officer he was free to attack one million unbelievers if he was fighting for “the pleasure of Allah” and stressed the importance of an “ambush”, saying: “They shouldn’t know what hit them.”

Sentencing, Judge Andrew Lees said he was satisfied that Chowdhury was “dangerous” and posed “a significant risk to members of the public of serious harm”. He added that Chowdhury has revealed to undercover officers his “devotion to the cause of violent Islamic extremism”.

“I’m satisfied that you planned to commit attacks of terrorism imminently,” the judge added.

His sister Sneha Chowdhury, 26, who was convicted of one count of failing to disclose information about acts of terrorism, is yet to be sentenced.