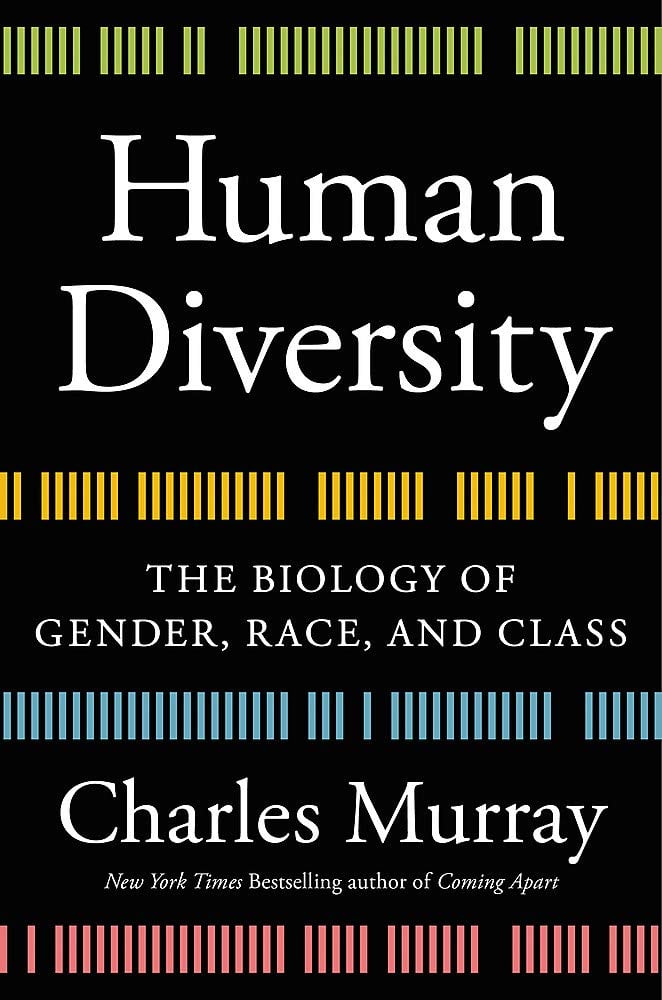 I read Charles Murray’s Human Diversity in France, a country whose motto is “Liberty, Equality, Fraternity.” All three of these terms are contentious both in their meaning and practical application, but none more so than Equality.

It must be immediately obvious to anyone who walks down a street that humans are not equal in the sense that they are physically indistinguishable, and it would take little more investigation to realise that they are not psychologically or characterologically identical either. But how do the differences between them arise, what importance are we to attach to them, and what, if anything, should be done about them?

In his acknowledgments, Mr. Murray modestly refrains from thanking many people by name who helped him in writing his book because “I am a controversial figure” and “The last thing a geneticist or neuroscientist working on a college campus needs is to be thanked publicly by me.” (So much for modern academia’s attachment to intellectual freedom.) This intense controversy surrounding Mr. Murray comes from the fact that he has long been a proponent of the importance of genetic factors in human destiny. He has been taken to mean that, against the human genome, government policy struggles in vain, though he is not quite as pessimistic as this might suggest. If we are to overcome many of our political and social impasses, it will be by something akin to a religious revival (or, more properly, a philosophical revolution) among the intellectual upper classes that takes full cognizance of the genetic differences to be found in the human race. Such recognition of difference would temper the desire to offer false and utopian remedies that, when they fail as they inevitably do, can only increase bitterness and resentment.

According to modern orthodoxy, all differences between groups in wealth and power (the two measures that are widely believed to be the summum bonum of human existence) necessarily arise by the exercise of privilege and illicit influence, and are therefore inherently unjust. In a fully just global dispensation, there would be pygmy heavyweight boxing champions of the world and, no doubt, mentally deficient winners of the Nobel Prize for physics.

It is against this orthodoxy (which in my view is both absurd and pernicious) that Mr. Murray’s book is directed. He marshals an immense amount of evidence to persuade the reader that our genetic inheritance is by far the most important determinant, at least in somewhat meritocratic societies, of our scholastic and economic success. Much of the evidence, being highly technical, will not be easy for the general reader to understand, though the author does not indulge in obscurity for its own sake, as many social scientists used to do. His insistence that there are biologically-determined differences (albeit overlapping ones) in the psychology of men and women will no doubt fail to win him plaudits in certain circles, but I rather doubt whether there are many people who, in their hearts, disagree with him.

Of course, any practical conclusions must be drawn carefully. Let us, for the sake of argument, however, suppose that the characteristics desirable in, or at least necessary to, the CEOs of large companies are more commonly found in men than in women for biological, or indeed for any other reasons. This would certainly not mean that no woman could or should be a CEO. It would, however, mean that a dictate from on high that half of CEOs must be women would be both deleterious to the economy as a whole and unjust to individuals. It might be, for example, that fewer women than men were interested in being CEOs and therefore those who were interested would be placed at an unfair advantage under the dictate. We should never forget that we can’t have positive discrimination without the negative variety also.

The only non-conflictual way to balance our equality with our differences (at least in present circumstances) is to let society find its own solution without a constant sifting of statistics on the assumption that a difference of outcome between groups is ipso facto evidence of foul play. To quote Shakespeare, that way madness lies—or perhaps I should say that way a low-grade and rumbling civil conflict that can never be settled to anyone’s satisfaction lies.

I nevertheless feel that there is an extremely important dimension missing from the book, namely that of history. Perhaps I can give a few examples of what I mean from my own country and my own experience.

In the 1950s, there were between 50 and 100 known injecting heroin addicts in the whole of Great Britain. In those days, doctors routinely prescribed heroin free of charge to addicts, so that the true number was probably not very much greater than the known number. Indeed, a government inquiry found that there was absolutely nothing to worry about as far as heroin addiction in Britain was concerned.

Forty years or so later, there were 150,000 injecting heroin addicts in Britain and 150,000 more addicts who did not inject. While I am perfectly prepared to believe that those who became addicts had some slight genetic propensity to addiction compared with non-addicts, I find it difficult to believe that genetic propensity had anything to do with an increase of up to 300,000 in the numbers of addicts. History and changing circumstances are more likely culprits.

As another example, I am perfectly prepared to believe that there is a normal distribution of propensity to crime in the British population (such that a few people will never commit a crime under any circumstances, a few will commit crimes under any circumstances, and most people fall somewhere between these two extremes) and that genetic endowment has a considerable influence on where along this distribution a person falls. But this cannot explain the shift of the distribution itself in the direction of crime, such that in a couple of generations the country has gone from being one of the least to one of the most crime-ridden countries in the Western world.

True, the genotype of the country, so to speak, has changed with massive immigration, but a considerable proportion of the immigrants come from groups with lower rather than higher propensities to crime than the native population, and in any case, the rise in crime began before mass immigration. So while genetics may explain why person a rather than person b commits a crime in any given society, it cannot usually explain why society y is more crime-ridden than society z. This limits the salience of Mr. Murray’s whole approach.

Mr. Murray is confident that new genetic and neuroscientific research (especially the former) will allow mankind finally to understand and thus regulate itself better than heretofore. I am afraid that we have seen such prospectuses before—for example, those of the Marxists, Freudians, and Behaviourists (Mr. Murray pokes fun, justifiably, at the last of these). While it is conceivable that this time it is true, that at last we are on the royal road to self-understanding, I rather doubt it. Our lives are as much a complex mess as ever they were, though at a much higher level of comfort.

The statistical ability of genetic screening to foretell the future of an individual person is interesting but also open to potential abuse, if historical experience is anything to go by. Even the most enthusiastic of geneticists would not claim that genetic endowment determined more than a proportion of an individual’s behaviour in any given circumstances (which themselves are subject to unforeseen and unforeseeable change). There is a danger that authorities, impatient of their inability to mould society as they would like or as they are expected to do, will take probabilities for certainties and go in for a little prophylactic imprisonment, psychosurgery, medication, or any number of other dystopian policies.

Mr. Murray is regarded as an intellectual bogeyman, which is absurd. I think he is sometimes mistaken, but let him who is without mistake shout the first insult. A suitable punishment for the spoilt brats of Middlebury College who treated him so badly would be to read, learn, and inwardly digest the last couple of pages of this book.

In those pages, Mr. Murray points to the deep and deleterious snobbery of the metropolitan, cognitive elites of which he has written, who in general imagine that to be something unlike themselves is a terrible fate. Of this I will give one striking example from the left-liberal British newspaper, the Guardian: a columnist once wrote that underclass girls in Britain got pregnant so young because the only alternative for them to early motherhood was stacking supermarket shelves. This elite-educated columnist thereby implied that stacking supermarket shelves was the summum malum of human existence, overlooking entirely the fact that stacking supermarket shelves is a perfectly honourable and socially useful thing to do, is not unpleasant in itself, may not be the last job the person doing it will have, and is probably suitable for many people of limited abilities.

It is the disdain that hurts, and that is what the modern upper class so successfully communicates to those below them on the social scale. “It is time,” says Mr. Murray, “for America’s elites to try living with inequality of talents,” and to stop pretending that they are tormented by guilt at their own good fortune, which at the same time they do everything possible to preserve.