Another attempt to extend the call to prayer across our cities. This one is cunning; it also encourages churches to ring their bells (knowing that the churches are currently closed and bell-ringing suspended) ostensibly to raise morale and spiritual awareness during the current pandemic. From the Harrow Times

Harrow’s main mosque wants to broadcast the Muslim call to prayer (adhan) across town from loudspeakers on its roof, but the plan is already dividing opinions. 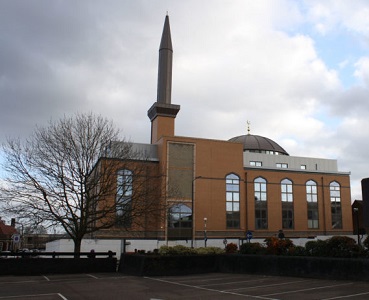 Harrow Central Mosque has lodged a planning application with Harrow Council to vary the conditions of its licence which says it can’t broadcast music or amplified sound, so it can broadcast the call to prayer at 6pm every Friday. It’s also calling on churches across Harrow to ring their bells at the allocated time.  It’s part of a “Call to Prayer” campaign set up by fundraiser Rehana Choudry which is asking people of all faiths to reflect on their lives during the coronavirus pandemic at 6pm each Friday.

But a petition – so far signed by 17,442 people on change.org – has been set up by residents opposed to the call to prayer broadcast.

Opponents of the plan for the mosque at 34 Station Road have urged people to write to Harrow Council saying that noise should not be imposed on the town without people having a choice to hear it, and that faith is a personal practice and must not be forced on others.

The opponents also say there’s a multi-cultural population in the area which doesn’t want to be “subjected” to prayer.

According to Muslim website 5 Pillarz this is “a deluge of complaints”.

A proposal to broadcast the adhan from Harrow Central Mosque in north London has been met with a deluge of complaints by local residents.

But the proposal has attracted hundreds of comments on the council’s website, the vast majority of them complaining about the plan on the grounds of noise, traffic and disruption. Some comments were even clearly Islamophobic in nature.

One objector said: “This is noise pollution and forcing non-Muslims to listen to something they can’t understand. This should not be approved. All religions are allowed to practice but without disruption to others.”

Another said: “It is out of character for the community. Already the area is a no-go area on Fridays due to traffic congestion in the area.”

Yet another said: “We are senior Hindu ladies. It is against our religion to hear the Muslim call to prayer. We are elderly and disturbed by this. We are very worried. This Harrow is a multicultural place. Will you also let the temples broadcast their messages? We are offended and object.” So it isn’t just nasty white racists then???

Meanwhile, Harrow Mosque has released a statement saying that the adhan application is temporary in nature and relates to the pandemic alone and that they are not seeking to secure a permanent broadcast. Nah – of course not.

A Harrow Council spokesperson confirmed it will hold a consultation on the application before assessing it against current local and national planning policies.

I have a long memory. I remember the violence from mosque worshippers against both demonstrators concerned that it was being built at all and the police. Here. Here. And here.