A bit more about the criticisms of Didsbury Mosque discussed this week at the Manchester Arena bombing enquiry. This time reported by the Daily Mail 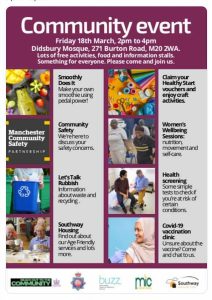 Greater Manchester Police have been slammed for endorsing an event at a mosque attended by Manchester Arena suicide bomber Salman Abedi which was accused turning a ‘blind eye’ to extremism.

Didsbury Mosque in south Manchester came under severe criticism on Monday at the Manchester Arena public inquiry into the terror attack, with calls for its status as a charity to be ‘reviewed’ by regulators.

Dr Paul Stott, Head of Policy Exchange’s Security and Counter Extremism Unit, said “The Greater Manchester Police should as a matter of urgency review their endorsement of this event. But they also need to be upfront and have a proper, unflinching look at wider issues, outside of this single event.

‘The GMP– and indeed the local authority, its representatives, and anyone in public life – must think more carefully about “choosing their friends wisely” when they are looking at which community groups to engage with.’

Policy Exchange said it has been urging caution since 2009 in  applying criteria for engagement with Muslim groups.

But it was claimed the mosque had hosted extreme Islamist sermons, failed to condemn violence and ‘buried its head in the sand’ over radicals in its congregation.

Salman Abedi was said to have attended the mosque and his father Ramadan and brother Ismail were also involved in positions at the mosque.

John Cooper QC, representing some of the bereaved families. . . described the evidence to the inquiry from Fawzi Haffar, the current chair of trustees of Didsbury Mosque, also known as Manchester Islamic Centre, as ‘frankly implausible’.

Mr Haffar claimed the mosque’s Islamic orientation was not extreme but ‘middle of the road’, and he said he was not aware of any links to Libya or knowledge of worshippers going abroad to fight in Syria or Libya.

However, Mr Cooper suggested he downplayed any issues and was more concerned with protecting the mosque’s reputation than putting things right. He said it was ‘concerning’ and ‘troubling’ that the mosque failed to make any condemnation of violence on its own website and had hosted speeches talking about giving money for ‘jihad’.

Mr Cooper said it showed the mosque was aware of the presence of extremist and violent sentiment among parts of the congregation, and the south Manchester Muslim community more generally, but adopted a ‘passive’ attitude and preferred to ‘turn a blind eye’.

This approach amounted to a ‘dereliction of duty’ to the community by Didsbury Mosque, Mr Cooper said.

An Imam at the mosque, Mohammed El-Saeiti, had delivered a sermon in October 2014 in which he explicitly condemned some terrorist groups. But Mr El Saeiti said the trustees believed speaking up against terrorists would ‘provoke’ its sympathisers and supporters.

The mosque then failed to support him when he faced a petition for his removal signed by, among others, Ramadan Abedi. . . after the bombing the mosque’s solicitor, a Mr Hafezi, pressured him to not mention the Abedis’ links to the mosque.

PrevAmjad Hussain, of Keighley, jailed for 12 years for rape of girl
A Great Afghan SoulNext