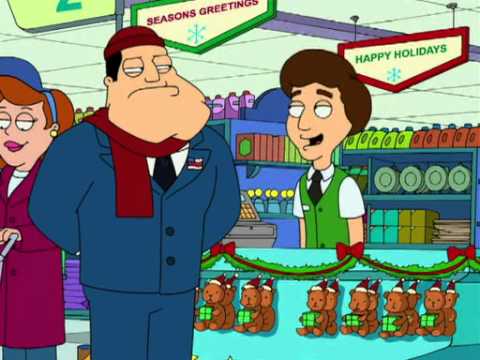 Every year I receive from the United States a number of Christmas cards, or at least cards that arrive at about the time of Christmas, that infuriate me.

They do not say Merry Christmas but Happy Holidays; this I regard as an insult, implying as they do that I am the kind of person who might take offense at the slightest reference to any religious belief to which I did not myself fully subscribe. In other words, that I am a thoroughly narrow-minded and bigoted person who is capable only of tolerating the utmost blandness, and likely to be deeply offended by anything else.

By contrast, in the small English town in which I live some of the year, there is a restaurant owned and staffed by Muslims who happily give out Christmas cards to their customers and festoon their restaurant with Christmas decorations. Perhaps this is only a matter of commercial calculation, but they take no offense at being wished a merry Christmas in their turn by their customers.

A document of the European Commission, that strange hybrid and semi-dictatorial organization at the centre of the spider’s-web of European political institutions, recently proposed to reform the language used by employees of the Commission, and there are no prizes for guessing the nature of the changes proposed.

The word Christmas, for example, was not to be mentioned because not everyone in Europe is Christian and might therefore be offended by reference to Christmas and feel excluded, and gatherings were not to be addressed as Ladies and Gentlemen, because some in the room might not consider themselves as either male or female.

The document was withdrawn after what the Guardian, the British newspaper that is now to the Woke religion what Watchtower and Awake are to the Jehovah’s Witnesses, called a “right-wing outcry.”

But the withdrawal of the proposal is only a temporary and tactical retreat. The person responsible for it, Helena Dallí (a former Miss Malta), issued the following statement in pure Woke bureaucratese: “My initiative to draft guidelines as an internal documents for communication by commission staff in their duties was to achieve an important aim: to illustrate the diversity of European culture and showcase the inclusive nature of the European commission towards all walks of life and beliefs of European citizens. However, the version of the guidelines published does not adequately serve this purpose. It is not a mature document and does not meet all commission quality standards. I therefore withdraw the guidelines and will work further on this document.”

In other words, like General Macarthur, she will return—presumably, like him, in greater force. The one thing of which Woke warriors cannot be accused is of giving up easily.

Underlying the bureaucratic desire to reform language are two assumptions: first that it is the duty of bureaucrats to prevent offense to people occasioned by the use of certain words, and second that they know what words will give offence to people.

Of course, there are only certain categories of people who needed to be protected from taking offence: that is because, in the estimate of their would-be and self-appointed protectors, they are very delicate and can easily be tipped into depression or states of mind even worse than depression.

Whether it is flattering, condescending or downright insulting to consider people so delicate that they cannot hear certain words that were hitherto considered innocuous, I leave to readers to decide. For myself, I think that to regard people as psychological eggshells is demeaning to them, but other may think differently.

But the question still arises as to whether the people supposedly in need of bureaucratic intervention actually do take offence at the allegedly offensive words, such as Christmas, when they are uttered.

It is in the interests of bureaucracies that the population should become hypersensitive, for then it will run to the bureaucrats for so-called protection from offensiveness.

A hypersensitive population creates endless work for the bureaucrat to do: he will have constantly to adjudicate between the claims of those who have taken, and those who have allegedly given, offence. Conflict and stoked-up anger are to him what fertilizer is to corn.

For much of the population, hypersensitivity becomes a duty, a pleasure and a sign of superiority of mind and moral awareness. In addition, it is an instrument of power. And, of course, habit becomes character. What may have started out as play-acting becomes, with repetition, deadly sincerity.

People who have had to be taught what microaggressions are because they have not noticed them eventually come to believe in their reality and that that they have been subjected to them. Then they start to magnify them in their minds until they seem to them very serious: they become self-proclaimed victims.

There are two things that victims seek in our law-saturated world: revenge and compensation. Neither of these things can be achieved without the aid of a large apparatus of bureaucrats (civil-litigation lawyers are bureaucrats of superior intelligence who are usually endowed also with a modicum of imagination).

And from the point of view of political entrepreneurs, the promoters of diversity and equality of outcome, the more people who consider themselves to be victims the better: for they bring more grist to their mill. Psychotherapists ably bring up the rear, for they too need the psychologically vulnerable in order to prosper.

All? Did she say all? Does she include prostitution and pimping, drug-dealing, and heroin-taking, membership of far-right political groups, street gang warfare, Islamic terrorism and people-smuggling among the diverse walks of life that she wants and believes it her duty to showcase (but not that of Christians, of course)?

It is obvious that she cannot possibly mean what she said. Never mind: as every language reformer knows, the purpose of language reform is not to ameliorate hardship but to achieve, increase and hold on to power.

Prev‘Everybody knows.’ Except for the New York Times. And the diplomats.
Nuremberg Trials: Punishing EvilNext