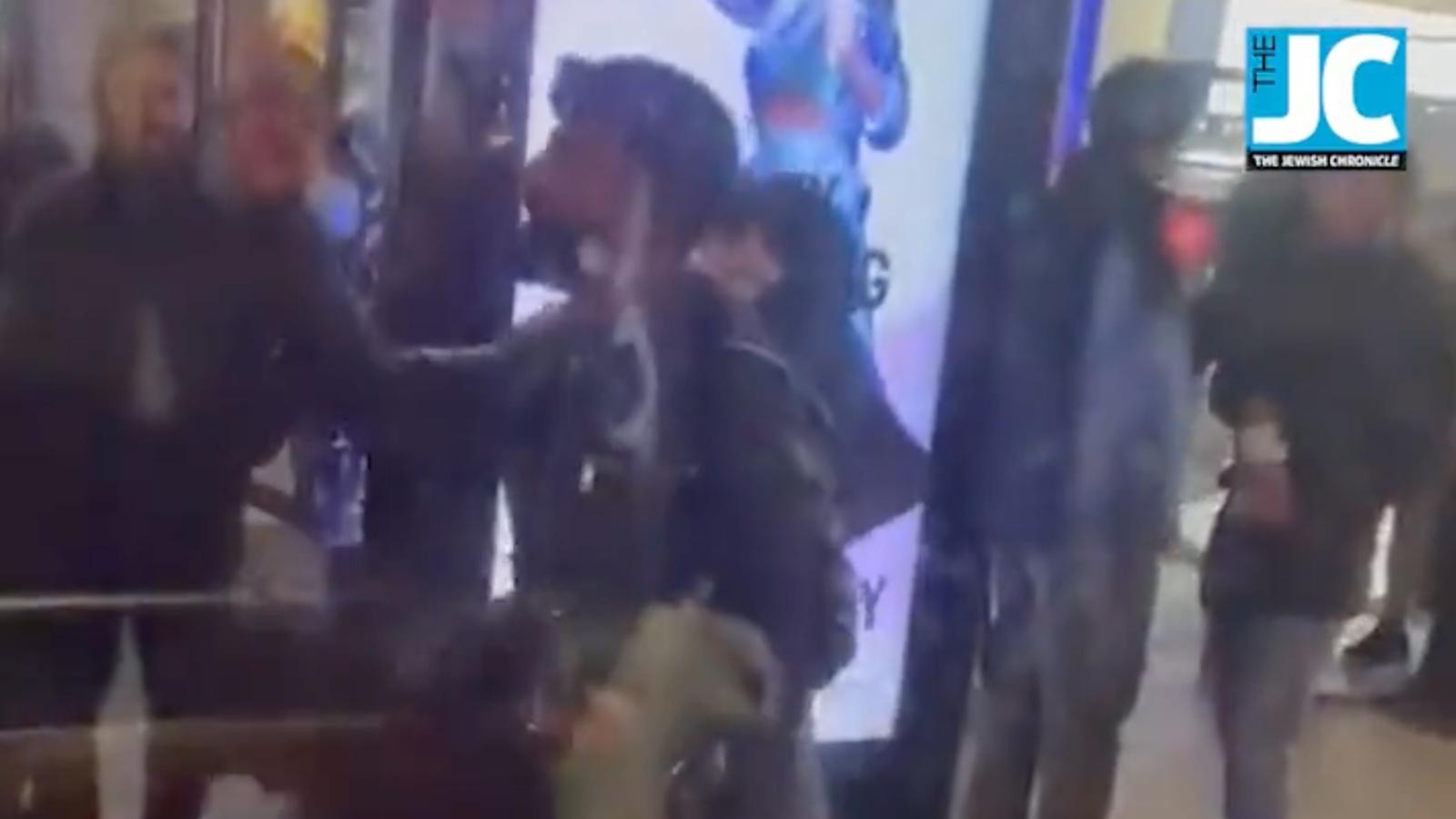 On December 1, 2021, a gang of thugs harassed a bus full of Jewish teenagers in Oxford Street, London’s flag shopping area in Central London. This hate crime was caught on video with the thugs abusing the youths, banging the bus, spitting on it , taking off shoes, an insult in Arab culture, giving obscene gestures and the Nazi salute. The teenagers were celebrating the first night of Hanukah, the festival of lights commemorating the Jewish uprising in the second century BC against the Greek-Syrian kingdom which had tried to change the Jewish temple in Jerusalem with statues of Greek gods. The Jewish population miraculously saved the Temple with a single vial of oil, enough for one day, that lasted for eight days. The evil perpetrators at that time had been defeated.

The British thugs on Oxford Street exemplify the reality that evil is committed by simpletons and morons, as well as by monsters. But sometimes there is deliberate obfuscation. The most notable example of confusion, either deliberately created by the individuals involved or by inaccurate commentors on them is the case of Austrian born Adolf Eichmann who pretended to be a faceless bureaucratic functionary, a pose that deceived Hannah Arendt in her very controversial and misguided assessment of the “banality of evil” of Eichmann.

Eichmann, SS Obersturmbannfuhrer, was in fact an ideologically motivated antisemitic Nazi, methodically organizing the Final Solution of the Jewish Question. He attended and prepared the minutes of the Wannsee Conference on January 20, 1942, that decided on the policy of extermination of all Jews in occupied Europe. Jews were to be given “special treatment”, that is murdered.

In this Eichmann was a key figure, implementing, identifying, assembling, transporting Jews with zeal and resourcefulness to the six extermination camps, Chelimo, Belzec, Solebor, Treblinka, Majdanek, and  Auschwitz–Birkenau. On April-May 1944 Eichmann and aides deported 444.000 Hungarian Jews to their death.

After the War, Eichmann had escaped capture and fled to Argentine with false identification papers, where after some years the Mossad captured him hiding in Bueno Aires. Brought to Israel, he was tried on the legal basis of the 1950 Israeli law that allows Israeli courts to try and to punish Nazi perpetrators for crimes against Jews in World War II. Eichmann, testifying from behind a glass booth to protect him from possible assassination, claimed to be only a “little cog in the machinery of destruction.” He was tried for eight months on 15 counts in a case that aroused international attention. The event that brought knowledge of the extent of Nazi atrocities led to the term “Holocaust” becoming embodied in public consciousness, even though “Shoah” might be a more accurate term to describe the extermination. Eichmann was found guilty, sentenced to death, and hanged on June 1, 1962. His ashes were spread at sea.

By coincidence in October-November 2021, the BBC presented podcasts of the trial of evil monsters, the major Nazi war criminals, and seven organizations including the SS, Gestapo, SA, leadership of the Nazi party who were tried 75 years ago, November 20, 1945 to October 1, 1946 following the German surrender to the Allies in 1945.  After contentious discussion among the four war-time allies, U.S., UK, Russia, and France, a decision was made to establish a military tribunal to try Nazi leaders. The city of Nuremberg in Bavaria, ironically the site of annual flamboyant Nazi propaganda rallies, was chosen as the location for the trial, in a sense symbolically marking the end of the evil regime.

The Nuremberg Trials have not lacked critics. At least a number of factors were new. First, no civilian government leaders or military commanders had been put on trial by authorities of other states. Secondly, the trials were concerned with the waging of aggressive war, violation of sovereignty, and what came to be called “crimes against humanity.”  A new body of law had to be devised, especially to identify what were crimes against humanity and to be universal. On this point compromise was particularly necessary on two points. One was that the Soviet Union under Stalin could be held responsible for crimes against humanity, and this was ignored. A second was punishment of Nazis for bombings of major cities, since the Allies had also been responsible for destructive bombing of cities, especially the U.S.-UK  attack on Dresden on February 13, 1945, which has since  become familiar by Kurt Vonnegut’s novel Slaughterhouse Five. This controversial bombing made and still makes categorical moral positions on the issue difficult to sustain. In addition, documents in Russian were not fully translated. There weas rivalry among the judges and also among the prisoners. The trials were long and exhausting.

There were also compromises on what people to indict. Hitler, Himmler, Goebbels, Bormann, resumed, Richard Heydrich, were dead, so the major figure left was Herman Goering, who had surrendered to the Allies with 16 monographed suitcases, and valet. He thought, as the most senior Nazi, he could negotiate with the Allies. It was decided not to prosecute Italian Fascist leaders who were later tried by Italian courts.  Missing among the indicted, to mention a few,  were some significant figures:  Adolf Eichmann, Josef Mengele, infamous chief camp physician at Auschwitz-Birkenau., Fritz Stangl, commandant in extermination camps, active in euthanasia programs, Walter  Rauff, supplier of  gas vans, mobile gas chambers for killings, Kurt Franz. Commandant at Treblinka, and Erich Priebke, SS police force and overseer of the massacre in the Ardeatine caves in Rome.

On August 8, 1945, the London Agreement on Tribunals to try Nazi war criminals by an International Military Tribunal was agreed by the four Allies. The Nuremberg trials were based on this Agreement, which can also be considered as the foundation of international criminal courts and even the UN Charter of Human Rights. Trials would be based on three categories of charges; crimes against peace, planning and waging war by aggression; war crimes, improper treatments of civilians and POWs; and crimes against humanity, murder, extermination, enslavement, deportation on political, religious, or racial grounds, and other inhumane acts, the first indication of genocide.

It is extravagant, as Robert H Jackson said, to suggest that agreements or  trials of this character can end aggressive war or persecution of minorities, but the trials  did enunciates desirable standards of conduct that should be followed.

The Nuremberg trials were based on a mix of the legal traditions of the four war time Allies, and on the different views of President Harry Truman, Prime Minister Winston Churchill, Generalissimo Joseph Stalin, and the delegate Robert Falco of the provisional government of the French Fifth Republic. But the crimes defined in the London Agreement were laws that criminalized  actions before the laws were drafted.

Churchill’s view at first was to shoot the top 50 Axis leaders. Truman insisted oi a formal trial on western lines. Stalin wanted a show trial as he had in the Soviet Union. The outcome of the discussions was a new body of international law that was to be universal., Each of the four powers supplied two judges: the chief U.S. prosecutor was Robert H. Jackson, associate justice of the U.S. Supreme Court. Decisions and sentences were made by a tribunal, a panel of judges, not by a single judge and jury. Defendants were allowed to choose their own lawyers.

The Nuremberg trials were a series of military tribunals under the created new international law, important legal norms that are the basis for later conventions on human rights and the genocide convention. They prosecuted prominent members of the political, military, judicial, and economic leadership of Nazi Germany, individuals who, among other acts and war crimes, were responsible for the Holocaust.

The first trial, called by one of the judges the greatest trial in history, is the most well-known. Indictments were entered against 24 individuals and seven major organizations. Of them, 12 were sentenced to death, seven to prison, three were acquitted, and two were not charged.

One can only hope that the standards by which the Nazis were judged and condemned will be the basis of subsequent judgements. The BBC deserves thanks for bringing attention to perpetrators of evil