An exclusive from The Telegraph

The Taliban made millions from the World Cup by providing construction equipment to build stadiums in Qatar, The Telegraph understands.

Senior Taliban officials used lucrative salaries tied to peace talks to buy and then subcontract heavy machinery for tournament infrastructure over the past decade, a source from the Taliban’s Doha office revealed.

A large contingent of the Taliban leadership lived in Doha, the capital of Qatar, from 2013 onward where they were engaged in long-running peace talks with the US and UN. 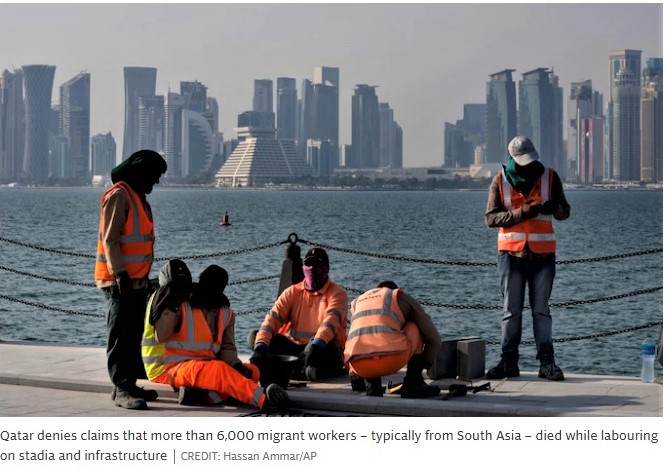 “The Taliban invested heavily in the World Cup construction and the tournament was a golden duck. They were paid millions,” claimed the source, who lived in Doha in the decade running up to the Taliban takeover of Afghanistan in 2021.

“Some Taliban members had between six and ten pieces of heavy machinery each in Doha and would earn up to £10,000 per machine per month.”

Two separate senior Taliban sources described how officials were given lucrative allowances to live in the country during the peace negotiations, which was then invested in heavy construction machinery.

It is understood that the Qatari authorities – with the approval of the US and UN – paid members of the Taliban’s political office in Doha a monthly stipend worth thousands of pounds as part of efforts to help facilitate peace talks with the West. The visiting officials were also provided with luxury SUVs, free health care and regular food deliveries.

The Telegraph has been told that the money was initially paid in cash and later transferred directly into the Taliban officials’ bank accounts, making it difficult for US and Qatari authorities to track spending.

“It was an open secret in the Afghan Embassy in Doha that the Taliban negotiations team and political office were being paid well by the Qatari regime and they invested these salaries in construction equipment for the World Cup,” says one former senior Afghan diplomat in Doha. “The Taliban’s Haqqani network even used to collect money and donations from Afghans based in other Arab states and promise them the money would be invested in the Qatar World Cup projects.” I suppose they had to diversify after the opium poppy trade was interrupted.

In a response to The Telegraph, a spokesperson for the Taliban said: “We reject claims about the Islamic Emirate of Afghanistan providing any construction machinery to the State of Qatar for the 2022 world cup. No official of the Islamic Emirate has invested any ‘lucrative’ allowances/stipends on any heavy machinery and/or sub-contracted any such machinery to any Qatari firms.”