Will Unvaccinated Djokovic Be Allowed to Play in Medically Fascist America? 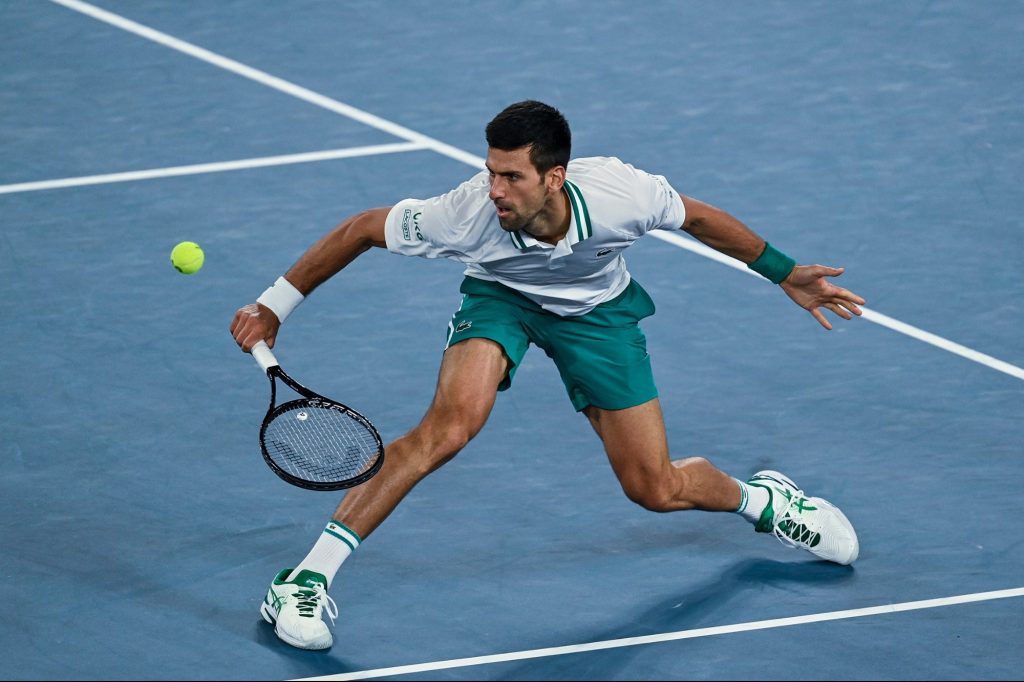 What is particularly amazing about the feat is he is the only person to do this over three decades. At the age of 35, Nole—as he is called—defeated opponents ranked 3, 4, 7, 8, and 9 in the world, all of whom are ten years or more younger than he, with the loss of just one set.

This man’s level of fitness and extreme flexibility is other-worldly. If you want a view of his workout methods,  a video on YouTube is simultaneously daunting and amusing. Largely vegan and gluten-free, he is meticulous about what he puts in his body and has written books about his diet.

Novak is also, arguably, at this point by far the most famously unvaccinated person against COVID-19 on the planet.

As is well known, his 2022 season was greatly attenuated for that reason by not being able to play in the Australian and U.S. Opens—two of the four Grand Slams, the most important tournaments in the sport—as well as other major U.S. tournaments at Indian Wells, California, and Miami, Florida, putting asterisks on all of them.

In the case of the Australian, Djokovic arrived in Melbourne in January 2021—he had already won a record nine of their championships—under the impression he would be allowed to play and was then sent home, banned from returning to the country for three years.

The excuse was that his unvaccinated status was a threat to the Australian public. Too many might want to emulate the sports hero.

This decision has now been reversed and Djokovic will be playing in the 2023 Australian Open in January as the heavy favorite to win again.

But what about the U.S. Open and the other U.S. tournaments? So far, according to our government, unvaccinated foreigners are not allowed to enter the country.

Ironically, unvaccinated Americans, like Tennys Sandgren, born and raised in Gallatin, Tennessee, about twenty miles from my house, have been permitted to play domestically. Although nowhere near Novak’s level, Sandgren has been playing across the globe for many years.

Given the now plethora of worldwide reports questioning the purpose and efficacy of the vaccines, many established medical authorities even consider them to be dangerous, particularly for younger men and athletes Djokovic’s age and to women of childbearing age; you have to come to the conclusion we are living under a form of medical fascism.

The era of “our bodies, ourselves” is not only dead, it’s decomposed, especially in the United States of America where it is difficult to get any kind of medical care without proving to some bureaucrat you have been vaccinated. We are still not allowed to think for ourselves, when there is plenty of evidence that establishment thinking is either wrong or limited or, worse, bought and paid for by government/Big Pharma entities.

The continued excellence of Djokovic is of course not proof of anything, only anecdotal. He is exceptional in his abilities, obviously highly intelligent, and speaks a half-dozen languages.

But on a symbolic level, his presence is tremendously important. One of the greatest athletes alive was willing to swim against the tide and sacrifice considerably for his beliefs.

Personally, I find him an inspiration, although I am more than twice his age. He makes me want to get out on the court and hit some balls, which I normally do several times a week.

It will be fascinating to see how our (yes, repressive) government deals with him. The Indian Wells tournament—sometimes referred to as the Fifth Major—begins March 6, 2023. Novak has already won it five times.

PrevWorldview, ideology, fact, religion. Let’s draw some demarcation lines around them.
How the Taliban helped build the stadiums for the Qatar World CupNext