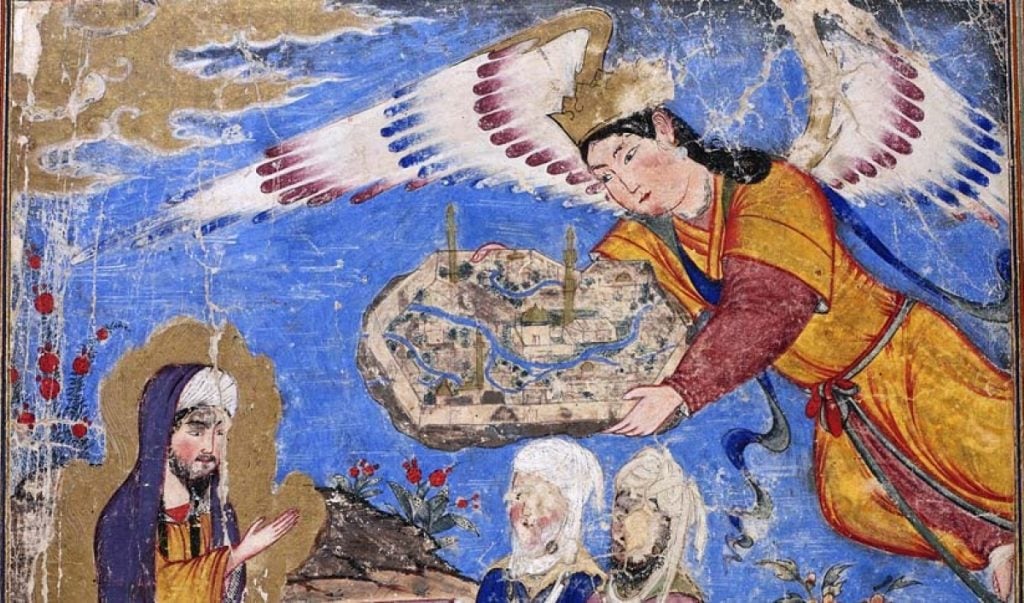 “I certainly believe in examining and attacking Islamism’s ideology. However, what you are arguing against below is not Islamism but a core Islamic belief. I do not engage in religious disputation and do not find it helpful for the purposes of fighting Islamism.”

This was a reaction by a well-known critic of Islamism (whom I will not name here since this view is mainstream) to my contention that, in order to defeat Islamism, we in the West need to shed bright light on the simple fact that it is impossible for anyone — be they ayatollahs, or mullahs, or rank-and-file Moslems — to know whether God talked to Mohammed or not, and that any claim that Koran is unequivocally God’s word is by nature idolatrous and is, therefore, ultimately godless.

Obviously, both my and my respondent’s argument involves (and mixes together) several rather unrelated notions: hard fact, religion, and ideology. Those are also inseparably mixed in real life — the perpetrators of 9/11 thought that God demanded an attack on America. Religion and fact were, to them, one and the same; else, they would not have killed themselves (and so many others) in pursuit of that goal.

Religion and fact are also treated as two sides of the same coin when it comes to apologetics: when talking of religion-motivated violence, you had better not critique the underlying religion! The double-speak here is fascinating: for the purposes of perpetrating terrorism, Islamists see Islam as factual truth. Yet when it comes to criticism of terrorism, Islamist vehemently object to examining and debunking those factual claims. And the critics of Islamism concur, too: doing so is not “helpful for the purposes of fighting Islamism.”

Perhaps this is because there is simply too much politics involved in discussing Islam and Islamism — after all, some Moslem countries are allies whom we would rather not alienate by loose talk about Islam. So, much as we would like to undermine Iran’s ayatollahs and their clients like Lebanon’s Hezbollah and Yemen’s Houthies, or their Sunni counterparts like ISIS, Hamas, and Afghanistan’s Taliban regime, we have to bite the tongue when it comes to analyzing Islam and debunking the Islamist ideology. I get it — so let me move the discussion of the difference between religion and fact to a more neutral ground. It will not bother anyone if we have a no-holds-barred dissection of an extinct religion — say that of the Aztecs. It is particularly apropos since, exactly like Islam, it claimed to be based on hard facts. And — just like Islamist terrorism does — it shed human blood on a monumental scale in support of those facts.

Aztec religion’s facts were related to astronomy. Aztecs deified the heavenly bodies, and interpreted the arrival of a night as the time of a recurring cosmic battle between the warmth-giving Sun and the evil, cold Moon (that was in cahoots with the stars). If the latter, evil forces somehow managed to prevail, the Sun would not rise again. The crops would fail, and humanity would go extinct for sheer lack of food. To prevent this catastrophe, Aztecs nourished the Sun to give it strength in its nightly battle — feeding it hearts of the captives sacrificed to the tune of around ten per day, to an annual total that amounted to the 9/11 attack (was it a “religion of peace,” too?).

Yes, this was a religion, all complete with various deities, the Sun chief among them (I gave a bare schematic of it — Aztec pantheon was much larger). Yet — to my point — this religion was fact-based.

As we know full well by now, those “facts” were plainly wrong. The Sun is not powered by the hearts of a dozen unfortunates piously butchered for its nourishment, but by an ongoing thermonuclear reaction. So what would be the proper way of dealing with the Aztec religion if we encountered its adherents today, in some forlorn corner of a pristine jungle? Wouldn’t we be right to say, “your facts are wrong; hence your religion is bogus?” Would we be right to explain to the blood-besmeared priests officiating at the pinnacle of a pyramid that they were — to put it into the factually correct — just a bunch of ignoramuses?

When it comes to Islamism, we are faced with the exact same dilemma. Islam is also rooted in the fact — the “fact” that God talked to Mohammed — the “fact” that is by nature unverifiable and is, therefore, unreliable, Mohammed’s “revelation” being a two-step communication involving three parties in which the final, third party in the communication chain can never know whether what it was told by the second party is truth, or not. Can — and should — we disentangle that “fact” from the religion of Islam, and debunk it — irrespective of how this would impact Islam itself?

Let’s see. Some argue that man is just a machine (Mark Twain wrote an entire book on the subject). The advent of computers made this idea easy to illustrate: just as there is computer hardware with its operating system, humans have bodies that function according to internal controls of which we are unaware and with which we do not interfere. Just as computers are hooked up to electricity to function, we need food, air and water. Just as computers are linked into networks over which they exchange information packages, we have networks of relatives and friends. Just as computers may get hit by viruses transmitted over the network, we may get sick by a close contact with an infected other. And — which is most relevant for the present discussion — just as computers run custom software, so we too have our custom, unique, respective “worldview” — a sum of gradually accumulated information we use to make conscious decisions. This information comes from a variety of sources: we learn some in school, some comes from religious instruction, some from books, old and new, and from conversations. This information gets sorted out, accepted, rejected, remembered, forgotten; it covers some areas of knowledge, but is blank as to others. And it is this mixture of what we perceive as “fact” that we rely on in our decision-making.

Needless to say, some of this “fact” is indeed factually true, and some of it isn’t — yet we rely on both kinds as if both were true; we simply don’t know any better. Each of us has one’s own configuration of this, custom “worldview” software — and acts accordingly. Mohammed Atta and his fellow 9/11 hijackers were sure of the fact that in killing as many Americans as they could, they were doing God’s will. This they deduced from their reading of the Koran — and they read the Koran because they thought it was God’s word.

Now, would it be wrong if someone intervened and told Atta and his friends, “no one — yourself including — can know whether God talked to Mohammed, and whether Koran is God’s word. You have fallen into idolatry. Don’t do it”? That would be stating the fact — the fact that is, admittedly, entwined into religion — and hence, it would have been a statement about religion, too. Sure, it would be an impolite (and, certainly, unpolitical) statement — and yet, just think of how many people would have been spared a terrible, premature death if Atta would have been made to pause for a moment and think — and abandon the 9/11 plot, explaining to his co-conspirators that their underlying “facts” were no facts at all, that they were factually wrong (and, in religious terms, idolatrous)!

So to address my respondent’s reservations, let me say this — with all due respect for him: yes, meddling in the other’s religion isn’t good manners, and should never be done. But meddling in the other’s facts when they are not facts — even if they are entwined into his religion — is an absolute necessity. Taking for a fact what is not a fact (as the Aztecs did in the past, and as Islamists do at present) can be catastrophic — for all of us. So, facts placed inside a religion should be treated as facts and not as a religion, and discussed, analyzed, and shown to be wrong if they are — be they part of Islam or anything else, even if (like is the case of Communism and Nazism) the “worldview” in question is not concerned with God.

Lev Tsitrin is the author of The Pitfall of Truth: Holy War, its Rationale and Folly.

PrevGreenford Man on Trial for Terrorism Offences
Will Unvaccinated Djokovic Be Allowed to Play in Medically Fascist America?Next