From the Times, and the BBC

Ali Harbi Ali, 26, told the jury at the Old Bailey that he wanted to “make hijrah”, to travel and fight for Islamic State, but he found it too difficult to get there. 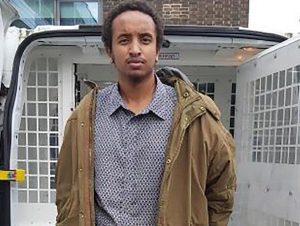 He is accused of stabbing Amess, (I don’t think there is any doubt that he stabbed Mr Amess, and that Mr Amess died; the defendant is denying that his act was murder) the Conservative MP, more than 20 times during a constituency surgery in Leigh-on-Sea, Essex, on October 15 last year. The prosecution alleges that he had planned an attack for years and considered other MPs including the cabinet minister Michael Gove and Mike Freer, the Tory MP for Finchley & Golders Green.

Giving evidence on Thursday, Ali said he decided to kill Amess because of his voting record on foreign policy including airstrikes in Syria.

“I decided to do it because I felt that if I could kill someone who made decisions to kill Muslims, it could prevent further harm to those Muslims,” Ali said.

Asked what difference killing Sir David would make, he said: “For one, he can’t vote again. If he had previous for doing votes like that he won’t do it in the future, and perhaps send a message to his colleagues.”

He added: “So hopefully, he won’t be able to harm Muslims in that regard.”

Under cross-examination by Tom Little QC, Mr Ali told the court he had no regrets about killing Sir David, 69, during a constituency surgery at Belfairs Church but denied being “utterly shameless”.

He said: “I wouldn’t use the word ‘shameless’, but I don’t have any shame.”

Mr Little said: “You don’t think you did any thing wrong?”

Mr Ali replied: “If I thought I did anything wrong, I wouldn’t have done it.”

He also retracted comments made to police saying he would not now class his actions as “terror”, saying the attack on Sir David was comparable with the actions of MPs who voted for Syrian airstrikes.

He also denied being a radical Muslim, insisting “I am a moderate Muslim”.

He said: “If you encourage someone to an act of jihad, it’s a good thing.” Ali said he carried out the attack “for Islam”  . . .Earlier he said he would not describe the killing as murder because “I don’t think it’s unlawful”.

Mr Ali told the court he had expected to be shot and die “a martyr” but when he realised the two officers who entered the building were not armed he decided to drop his knife.

Concluding his evidence, Mr Ali said he hoped that by killing Sir David other MPs would “cease hostilities with Muslims”.

The trial has restarted after a 10-day delay due to three jurors and the judge in the case testing positive for Covid-19.