From Breitbart. No national or London newspaper has this yet, and I don’t expect them to. 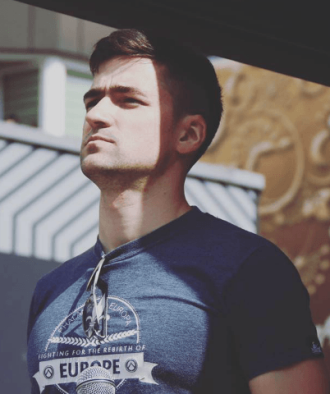 Heathrow airport ahead of a planned speech at Speaker’s Corner in Hyde Park, London.

Sellner, along with his partner, YouTube political commentator and author Brittany Pettibone, was refused entry into the UK according to the British branch of the Generation Identity movement.

In a press release, the group said that Sellner and Pettibone arrived in Britain at Luton airport at 1 pm (yesterday – Saturday 10th) and were told they were being detained because of the planned speech, with authorities claiming Sellner represented, “a far-right group and intend[s] to incite racial hatred.”

The pair were then moved to Heathrow airport at 1 am where they were both placed in detention, along with other foreign nationals waiting to be deported.

Sellner’s speech, reorganised for Speaker’s Corner in Hyde Park, which was set aside for free speech by an Act of Parliament in 1872, was on the subject of “threats to Free Speech in the modern world.”

Breitbart London spoke to both Sellner and Pettibone, who said they were being held in separate detention centres. Pettibone alleged that border officials told her that one of the reasons for her detainment was not only because of Sellner’s speech but also her plans to interview former English Defence League leader turned citizen journalist Tommy Robinson.

Sellner, who described the detention centre as looking akin to a typical American prison, said he was told by authorities that his speaking at Hyde Park could cause violence and disrupt community cohesion. Breitbart London has also been shown documents purporting to be from the Border Office that confirm Sellner’s passport being confiscated and his detention.

Both Sellner and Pettibone are set to return to Austria on Sunday afternoon. Members of the UK Generation Identity group have vowed to protest at Hyde Park.

The protest took place this afternoon at Marble Arch, at the head of Hyde Park. I wasn’t there but a good friend was and I hope to have an eye witness report later. Sellner and Pettibone join a list of activists refused entry to the UK which includes Geert Wilders, Robert Spencer and Pamela Geller. Jihadists returning from ISIS are usually welcomed without let or hindrance however.

PrevOn Brexit, Remember that Politics Is Not a Dinner Party
We must defend free speech against those who would use intimidation and violence to shut that down; you know who you are.Next