We must defend free speech against those who would use intimidation and violence to shut that down; you know who you are. 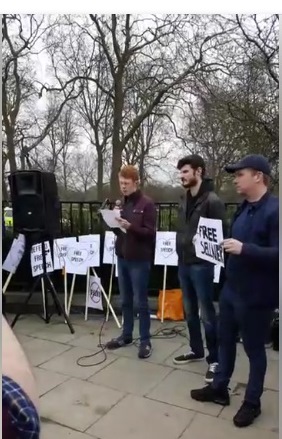 As I said earlier, a friend attended the Generation Identity rally at Hyde Park on the subject of “threats to Free Speech in the modern world.” He told me that the rally was not allowed, as originally anticipated, to gather at Speaker’s Corner in Hyde Park as they had placards and they are forbidden in the immediate vicinity. They therefore gathered just outside the park, opposite to Marble Arch.

There were about 100 attending in support of free speech; about 20 members of antifa turned up to oppose people who supported free speech. The priorities of the left have got very skewed these last 40 years.

Martin Sellner from Austria and Brittany Pettibone  from the US, who expected to speak, were turned round at the airport on the orders of the Home Office. Those who did speak spoke well and concisely. A statement from Martin Sellner was read. One speaker told of the incident earlier this week when Antifa stormed a meeting of the Libertarian Society at Kings College of the University of London and prevented a debate between Sargon of Akkad aka Carl Benjamin and Yaron Brook, director of the Ayn Rand Institute. Another speaker paid tribute to the sacrifices of our ancestors in two world wars in hope that they were making a better world for the generations to come after them. The speeches can be watched here, on a video uploaded to Facebook

I am reliably informed that this character to the left with the UAF placard is named Paul Sillet. He is big and busy in UAF circles, sometimes Liverpool, another day Leicester, Manchester, Peterborough…. Today in London he noticed several people filming the Antifa/UAF anti-free speech demonstration. Ignoring those observers who were men (or presented as men, being big, burly, masculine) he started berating the only woman, who seemed to be reporting for a European organisation, but my friend was unable to speak to her to find out more.  You can see him in this second piece of video at the link here, from 9.37 minutes.

The 20 or so representatives of black-clad antifa held their banners and did their usual dance and chants. However being outnumbered they kept their place behind the police cordon and behaved themselves.

This young man was explaining to camera the importance of free speech in a decent society when he was knocked out of the way by reporters rushing further down the park railings to a spot where, so my friend was told, a ‘man on a bike’ had let off a smoke flare.  No harm or damage was done.  My friend filmed for 5 minutes and then decided to go home.

I will keep alert for other Generation identity events and hopefully next time I will be able to attend.

Update Tuesday 13th, the Daily Mail have some photographs here from a free-lance reporter as part of their report on Canadian journalist Lauren Southern being barred from entry to the UK yesterday (Monday 12th)

Photographs and video by RF, London 2018.