Climate tsar suggests the parley was convened by an extraterrestrial force to save the planet from the bugbear of global warming. 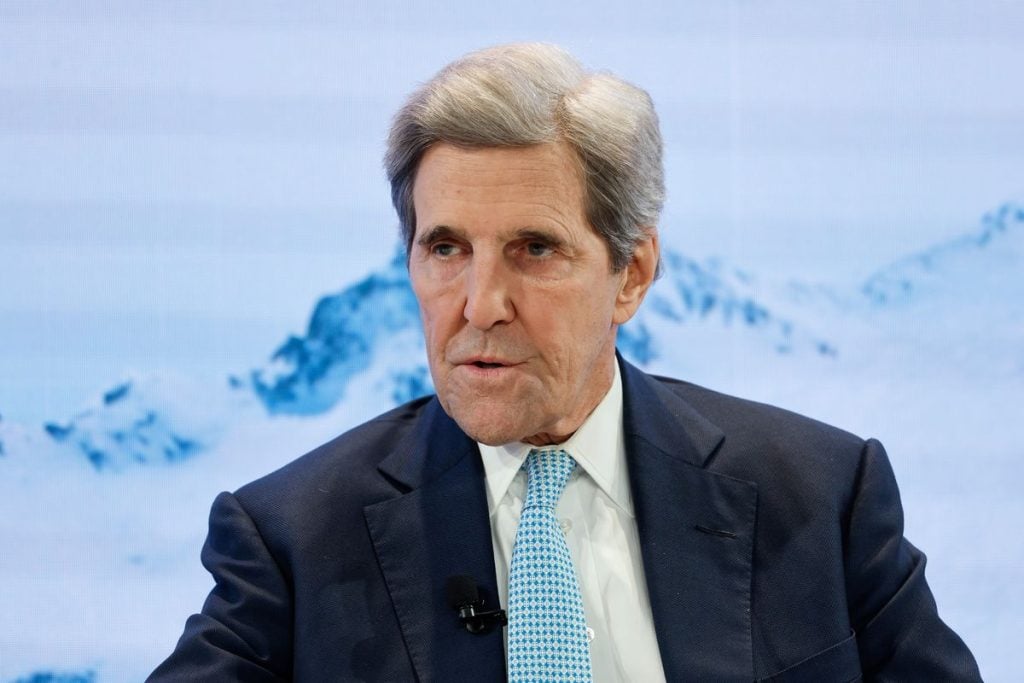 Mr. Kerry’s opening gambit was the unsettling assertion that those present had been convened by an extra-terrestrial force to save the planet from the imperishable bugbear of global warming. Despite the absence of any serious evidence that the world really is warming outside historic cycles, much less extraterrestrial intervention beyond normal theological notions, and although the battlements of global warming have been abandoned in favor of mere and fuzzier “climate change,” Mr. Kerry was frightening the credulous of frigid Davos about our imminent incineration.

The former state secretary acknowledged that anyone who believed him would be described as “crazy tree hugging liberals,” but was confident that we will get to “a low carbon, no carbon economy-because we have to.” He was not convinced that the worst consequences of the crisis would be avoided. These were going to affect millions of people all around the world and of the “20 countries most affected in the world from the climate crisis, 17 are in Africa.”

Mr. Kerry was also pretty direct in stating that this consecration of money to the continued war on our oil and gas industries would take the form of advancing colossal gifts to underdeveloped countries, mainly in Africa, to be spent in providing those states with unknown non-carbon related sources of energy.

Clean energy funding would have to triple on its current estimate to more than $12 trillion, practically all of which was to be provided by the advanced countries of the world. The objective is to reduce global warming to 1.5 Celsius degrees (which is about where it stands over the last century — $12 trillion to avoid a one degree rise in world temperature).

In support of this radical program Mr. Kerry advised his listeners to note that “half the species of the planet have already been killed.” He gave no substantiation of this assertion nor even a hint that any such disappearances of species were caused by changes to climate. Let us pause for a moment to grasp that Mr. Kerry expects North America, Western Europe, Japan, and Australia to invest $12 trillion to help Africa and parts of South Asia develop sustainable energy while China and India continue to burn coal in unheard-of quantities.

Mr. Kerry deserves the honor of trying to sell that one to the voters expected to provide the “money, money,” etc. With this gem, John Kerry surged ahead of Pete Buttigieg and his racist roads and Alejandro Mayorkas and his “The (southern) border is closed” and possibly even Joe Biden’s assertion that the evacuation from Afghanistan was “a complete success,” and some of the vice president’s howlers, in the gripping match to utter the most asinine comment of any cabinet-level member of this administration.

He also railed against companies that purported to commit to achieve zero carbon emissions but provide no plan to do so and are clearly not really serious about the goal. “You and I, we know they don’t have a clue how they’re going to get there. And most of them are not on track to get there.” His personal commitment to the cause has been to renounce flights on his wife, Theresa Heinz’s private jet (courtesy of her former in-laws), in favor of commercial and military aircraft, after emitting 300 times the annual carbon footprint of the average American by flying 180,000 miles pitching his climate change alarmism in his wife’s airplane.

The assertions that carbon use is solely responsible for global warming, that global warming is accelerating and is in itself harmful, and that the climate change that has occurred in the last century is abnormal; all of this is wild surmise. The long and loudly claimed unanimity of scientists on these points has been exposed as rubbish.

There is no such consensus and the entire program of shutting down the oil and gas industries in order supposedly to save the planet, began as a frenzied notion of environmental quacks and has been massively hyped by the defeated international left who from their proverbial post-Cold War dust-bin, have sallied out disguised as ecological zealots, and are attacking capitalism from a different perspective in the name of the preservation of our planet. It has been a formidable achievement of hitherto unsuspected improvisation from the ogres of Marxism of yesteryear.

This isn’t the first time John Kerry has laid an egg at Davos, nor is Davos an infrequent venue for such panegyrical suicide missions. Veterans of Davos’ pseudo-scientific, bureaucratically inspired, anti-Western policy-masochism cannot easily forget then Secretary of State Kerry’s appearance there on January 22, 2016. He opened by celebrating his grand discussion just before the session that he addressed with the Grand Mufti of Jerusalem and one of the leading Iranian ayatollahs.

“We had a great conversation for a few minutes,” he said, and represented the presence of these two as indicative of a rapprochement between Sunni and Shiite Muslims, instead of a strategy session between two of the world’s most fanatical anti-Semites. This was the warm-up for his crowning claim of success and distinction for the Obama administration in which he then served, that six of the world’s leading countries had just “formally certified (that) Iran’s path to building a bomb has been closed off, and an additional source of danger in the Middle East has been removed.”

Mr. Kerry added: “Believe me, President Obama understood that he would be criticized by some for reaching out to Iran. But he also knew that we were on a collision course, and Iran itself was on a collision course with the international community that in all likelihood, without diplomacy, would have ended in war.”

On the same occasion he assured the world that “President Xi and President Obama were able to stand up in Beijing a year before the Paris climate conference” and assure the success of that conference, as Mr. Xi had signed on to all Obama’s carbon reduction targets. Of course this was utter nonsense-China has done nothing but radically increase its carbon use.

And Mr. Kerry also assured his Davos listeners in 2016 that the United States and Cuba had made under his and Mr. Obama’s leadership immense progress in becoming ”much closer…in our ability to address our differences in a systematic and mutually respectful way.” John Kerry’s gift for prophecy, especially when torqued up by the heady praise of the self-elevated Davos masters of the universe, is undimmed by the passage of years.

All of this, and almost everything Mr. Kerry has said since he was running through the corridors of Congress harassing legislators about Vietnam more than fifty years ago, is simply bunk. No sane and informed person could believe a word of anything John Kerry says about international affairs. As a provider of vapid soporific addresses to misguided audiences, though, he remains a spellbinder.