a book review by Theodore Dalrymple 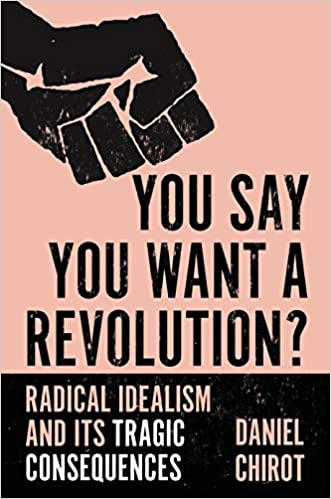 Considering how often revolutions have produced cataclysms, the word revolutionary has—at least for many people, especially when young—surprisingly positive connotations. The author of this short book, more extended essay than a history of revolutions in the two centuries that followed the French Revolution, sets out to explain why revolutions have so often been followed by slaughter on an unprecedented scale. Pascal said that he who sets out to be an angel ends a beast: to which we might add that he who sets out to create a heaven-on-earth creates a hell.

Professor Chiot writes extremely well and is never less than clear. He uses no jargon and he has a gift for condensing complex historical events into a short compass without resort to procrustean simplification. I would imagine that he is an excellent teacher.

He does not claim to have found a universal law of history that applies at all times and in all places, but he says that large-scale revolutions in the modern world have had a tendency to go through four discernible stages. First, an outmoded governing power refuses to accept that change is necessary and consequently refuses to make the necessary concessions to save itself. This leads to overthrow by relatively moderate leaders who would once have accepted compromise but see that change can only come about by revolution. Second, there is a counter-revolutionary reaction by those who do not accept their loss of power and who provoke a civil war or call for foreign intervention, or both. As a result, much more radical revolutionary leaders come to the fore and defend the revolution by increasing repression of enemies or supposed enemies. Third, the radical leaders, because they hold extreme views and are imbued with unrealistic notions of the complete redemption of mankind from all its earthly ills, impose experimentation on the population which is economically and socially disastrous. Fourth, in the case of its evident failure, the revolutionary regime loses its ideological ardour, and settles down to a kind of routine and less violent authoritarianism accompanied by large-scale corruption and cronyism.

This outline makes a lot of sense. One of the virtues of You Say You Want a Revolution is that it admits and illuminates, though it does not altogether explain, the failure of post-colonial regimes in Africa—even those that were established without much in the way of violent struggle. The first generation of post-colonial leaders were so taken by the prestige and perhaps by the glamour of revolution that they employed revolutionary rhetoric themselves, and sometimes went in for utopian schemes of their own. Julius Nyerere of Tanzania, for example (he is not mentioned in the book), was bitten by the bug of utopianism, caught in part from socialists at the University of Edinburgh, calling the sole permitted political party in Tanzania the Party of the Revolution. In the name of creating a just and equal society, he forcibly removed at least 70 per cent of the population from where it was living and herded it into collectivised villages. This was, all too predictably, an economic disaster, famine having been prevented only by large infusions of foreign aid, but it served the interests of members of the Party. Tanzania was saved from being much worse than it was by the fact that Nyerere, though perfectly capable of ruthlessness, was not personally a monster, and also by the peaceful nature of the Tanzania people themselves. Another saving grace was that there was no ethnic group that could have become dominant, so ethnic antagonism could not be added to the witches’ brew.

This illustrates a point that Professor Chirot makes clear in his discussion as to why the Vietnamese communist regime, though often brutal, never descended to anything like the level of horror of neighbouring Cambodia. Among the factors must surely have been the character and personality of the leaders as well as of the countries themselves. In other words, the fate of countries cannot be reduced, either in prospect or in retrospect, to an invariable formula. Human affairs will, to an extent, always be incalculable.

Still, some degree of regularity is possible. I was rather surprised that Professor Chirot overlooked one such. He writes the following of the corruption endemic under communist regimes: “a function of a deliberately exploitative, thieving elite that staved the general economy by its dishonesty than it was the essence of the system itself. Avoiding corruption was impossible because without it the society could not function.”

What is surprising here is that he does not mention why it could not function, but the answer seems to me perfectly obvious: it was because the communist system abolished the price system and substituted political decision-making in its place. This explanation is sufficient, for where there are no prices, and the economy is thereby largely demonetarised, goods and services can be distributed only by corruption. This is not to say that where there is a price system there will automatically be no corruption, obviously this is not the case; but such corruption will be limited by the very need for money to retain its value where such a price system exists. To that extent, it imposes at least a degree of honesty. The mystery of the Soviet Union or any other communist country is not why it produced so little, but why it produced anything at all: and here Professor Chirot is quite right. The answer is because of corruption: an ‘honest’ communist state would produce nothing. It could not survive.

There are one or two other surprising omissions. Professor Chirot’s theory is that revolutions break out when an outmoded governments refused to recognise their own outmodedness and hence to reform. This obviously has some similarities with the Marxist idea that revolutions occur when the relations of production of a society can no longer contain its productive forces, and is in contradiction to Tocqueville’s idea that revolutions break out not when rigid and dictatorial regimes are at their most oppressively rigid and dictatorial, but when they begin to reform and meet the demands of those who demand change. This is not to say that Professor Chirot is wrong, but one might have expected him to make allusion to the two theories.

The collapse of communist regimes in Eastern Europe, which he is happy to call revolutionary, also does not support his rough schema. It is not that the communist regime refused to reform, it is that it was incapable of reform for the same reason that  woman can’t be a little bit pregnant. If a regime makes the kind of claims for itself that the communist regime made, even if the leaders had themselves long since ceased to believe them, namely that it is the ineluctable denouement of all history, of not that of the universe itself, it cannot retreat, all the more so because its crimes, which one could and would have been claimed as a step in the march of history, would thereafter be seen for what they were: the choices of fanatical psychopaths avid for total power.

Professor Chirot seems to have a slight soft spot (admittedly only implicit) for socialism, that is to say for something more than mere social democracy. In his discussion of the case of Angola, in which a revolutionary movement emerged triumphant, but whose post-revolutionary regime was a pure kleptocracy under cover of Marxist rhetoric, he says: “Much more could have been done through either a market-friendly or a genuinely more socialist approach to economic development.”

This surely implies that somewhere, at some time, there was a socialist regime that would have handled Angola’s oil bonanza better, in which case one would have liked an example that it might have followed. Norway, perhaps? But Norway is not socialist, it is social democratic. Besides, Norwegians and Angolans are scarcely the same in a very large number of ways. I would have thought that the chances of Angola following the Norwegian model were, and are, approximately, and perhaps even exactly, zero.

I do not want to carp, however. The author is clearly an intellectually honest man, for rather unusually he seeks counterexamples to his schema, the Mexican Revolution being one. It was extremely bloody—perhaps half a million people were killed during it, and a million people died because of it—but it was never highly ideological. This is interesting, because it contradicts Solzhentisyn’s slightly condescending dismissal of Macbeth as an exemplar of human evil. Macbeth, says Solzhenitsyn, murdered only a handful of people because he had no ideology to inspire his viciousness. Well, here is a counterexample to Solzhenitsyn’s claim: a slaughter on a positively ideological scale without an ideology to guide it. The Rwandan genocide would be another counterexample of Solzhenitsyn’s dictum, for the ethnic antagonism that inspired it hardly rose to the level of ideology. Slight reservations notwithstanding (of a kind that are inevitable on reading books that approach large subjects), I recommend You Say You Want a Revolution as highly as I can. Among many other insights is an extremely important one easily forgotten, namely that we must take ideologists at their word. If they get into power, they do what the say they are going to do at whatever cost to others. To put it in a Marxist way, ideology is not merely part of the superstructure, an epiphenomenon. Rather, it could not be of greater importance.