From The Telegraph and The Australian

Two babies, their mothers and several nurses were among 16 people killed when gunmen stormed a maternity hospital in Kabul yesterday.The militants blasted their way into the hospital in the Dasht-e-Barchi district, trapping patients and doctors inside and firing indiscriminately. Islamic State claimed responsibility for the attack. Hours earlier, Abu Omar Khorasani, the head of Isis in south Asia, had been arrested by Afghan security forces at a house in Kabul.

Also yesterday, at least 24 mourners were killed by an Isis suicide bomber at a funeral in the eastern province of Nangarhar. Dozens more were injured.

Ramazan Ali, a vendor who saw the attack begin, told Reuters news agency: “The attackers were shooting at anyone in this hospital without any reason… It’s a government hospital, and a lot of people bring in their women and children for treatment.”

A maternity ward in the hospital is run by the international medical charity Médecins sans Frontières (MSF) and some of those working there are foreigners.

Afghan special forces rescued 100 women and children, including three foreigners, an official told the BBC. The attackers, who reportedly had gained access dressed as police officers, were all killed by security personnel after a battle lasting hours. 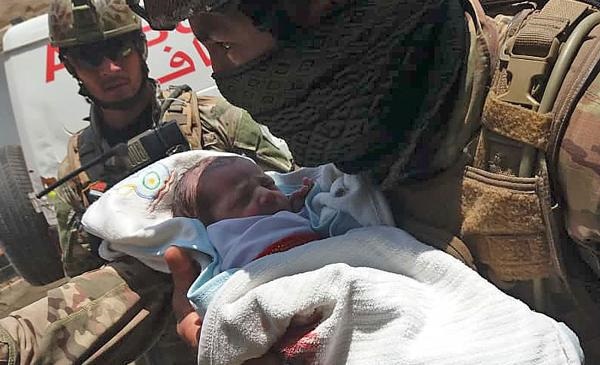 Images from the scene showed soldiers carrying one newborn baby to safety, swaddled in a blood-stained blanket.

Other sources have ISIS only claiming responsibility for the funeral attack, while the Taliban deny that either attack was their work.

The Taliban has been quick to condemn both attacks while the local wing of Islamic State, known as IS Khorasan, has already said it was behind the suicide-bombing of a police commander’s funeral in Nangarhar. The ISIS affiliate … has launched similar attacks to the hospital strike in the same Shia area of the capital …

Witnesses at the Kabul hospital reported at least two explosions and heavy gunfire as Afghan special forces, backed by US troops, battled for hours to retake the building. As smoke rose from the site, babies and their mothers were carried from the scene.

Afghan President ­Ashraf Ghani has ordered the military to restart offensive operations against the Taliban and other insurgent groups.

“The Taliban, with the stoking of foreigners, have intensified the war and are shedding Afghan blood,” Mr Ghani said in a national address just hours after the attacks. In order to provide security for public places and to thwart attacks and threats from the Taliban and other terrorist groups, I am ordering Afghan security forces to switch from an active defence mode to an offensive one and to start their operations against the enemies.”