Man fascinated by IS planned attacks on Big Ben and other UK targets, court told

The Scottish and Irish papers are reporting the opening of this trial at the Central Criminal Court Old Bailey already. Despite the defendants meeting at a London mosque, and many of the possible targets being in London the London newspapers are still out to lunch. From the Aberdeen Evening Express and the Belfast Telegraph

An Islamic State-inspired terrorist plotted attacks in the UK on a range of targets including Big Ben and the Queen’s Guard, a court heard. Umar Haque, 25, allegedly enlisted the help and support of others at his local mosque where he also tried to groom children with roleplay and extremist videos. 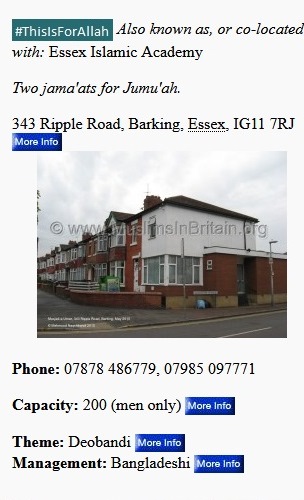 Abuthaher Mamun, 19, Muhammad Abid, 27, and Nadeem Patel, 26, who knew Haque through the Ripple Road Mosque in Barking, east London, are accused of helping him in various ways.

Mr Heywood said: “Umar Haque was fascinated by the warped and extreme ideology of Islamic State. Hum – I suppose I shouldn’t expect an establishment barrister to defy the convention that most of Islam is a ‘religion of peace’ but they shouldn’t bother; few people are fooled any more.

“He had identified methods and targets. Those targets were numerous but included for example, the Queen’s Guard, the courts, Transport for London, Shia Muslims, Westfield, banks in the City of London, Heathrow, west London, Parliament, Big Ben, the English Defence League or Britain First, embassies, media stations.

“Mamun also agreed to, and set about, raising money to fund Haque’s plans.”

Haque and Mamun are accused of preparing acts of terrorism between March 25 and May 18 2017.

Haque is accused of researching and planning a terrorist attack while Mamun allegedly traded in options in order to finance it.

Haque is further charged with preparing terrorist acts by leading exercises in physical training and “role play” with children at the Ripple Road Mosque.

The defendants, who all lived in east London, have denied the charges.  The Barking and Dagenham Post has their report here.

Haque has admitted charges of collection of terrorist information and a further charge of dissemination of a terrorist publication. And Patel has admitted possessing a prohibited weapon.