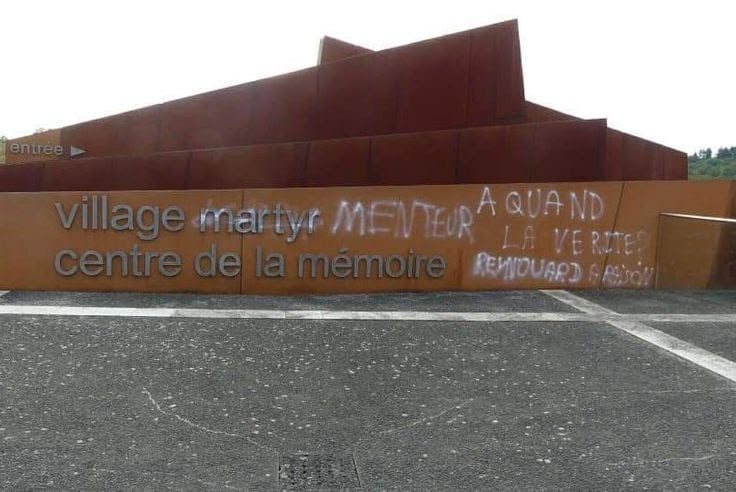 On August 22, 2020, an Austrian born machine gunner and a gunner in Nazi Panzer units, one of the last surviving members of the Waffen SS, died in Geraldine. New Zealand. By locals he was regarded as a remarkable survivor of World War II during which he was awarded two Iron Cross medals. Showing no remorse over his military actions, he complimented Adolf Hitler as “very clever. He brought Austria out of the dump.” He was virtually silent about Nazi activity in general. His comments were limited to “The SS were wrong, but that is about all, what could we do? “ In any case he pretended he did not know about the Holocaust or what happened in Germany or Poland during the War.

Many others have pretended to suffer from lack of information or loss of memory of the horrors of the Nazi regime. Others are haunted by the evidence, among other atrocities, of massacres: Katyn (April-May 1940), Sochy (June 1943), Lidice (June 1942), Babi Yar (September 1941), Ivanci (November 1943), Sant’Anna di Stazzema (August 1944), and Oradour-sur-Glane.

Philosophers like Paul Ricoeur have pointed out the reciprocal relationship between remembering and forgetting, showing how it affects both the perception of historical experience and the production of historical narrative. That perception is sharpened by  evidence of concrete events. By coincidence, an event, the defacing on August 21, 2020 of a memorial at the site of one of the worst atrocities carried out by Nazi Germany in World War II,  in the same week as the death of the oblivious ex-Nazi in New Zealand brought back memories of the barbarity of the Nazi regime.

This defacing event has dirtied the memory of the French martyrs who were murdered in the horrendous atrocity at the small village, Oradour-sur-Glane, a commune in France about 15 miles from Limoges. This place on June 10, 1944 was the location of the massacre of 642 French villagers, 245 women, 207 children, and 190 men, by 200 troops from the Nazi Second Waffen SS Panzer Division, Das Reich, supposedly as a reprisal for attacks by the French Resistance on German forces. The Panzer attack was horrendous not only by the rapid and methodical killing of the innocent villagers by machine gun fire and grenades, but also by the actions of the Division in herding and locking all women and children in barns and the church, which were then set on fire. All were burnt alive, and the village was totally destroyed.

Oradour-sur-Glane is now recognized as an iconic symbol of Nazi crimes, like Lidice, the small tranquil village in the former Czechoslovakia which was completely destroyed on orders of Adolf Hitler and Heinrich Himmler: all 173 males over 15 were executed and women and children were deported to concentration camps. The rationale for the massacre at Oradour and for the extent and rapidity of its destruction within a few hours remain disputed. There does not appear to have been any record of anti-Nazi resistance in the village inspite of the Nazi argument to the contrary.

Some confusion may have occurred because had been partisan Resistance activity in nearby Tulle. As a result, the Second SS Panzer Division, Das Reich, invaded and summarily executed civilians, on June 9, 1944, three days after the D Day landing, to punish the resisters. The Division arrested all men between 16 and 60.  Of them, 120 were ordered to be hanged and 99 males were killed in this way. 149 others were sent to Dachau concentration camp where 101 were killed. The same Panzer Division went the next day to Oradour-sur-Glane.

Why was this small town chosen to be massacred? There had not been any uncontrolled violence in the village. The villagers were not assisting the Resistance.  Vichy collaborators may have deliberately falsely misled the Nazis into believing that some of the villagers were holding a captured German officer and were planning to kill him. Whatever the supposed reason, nothing could justify the operation of the massacre which served no military purpose. The attack was carried out in lethal organized fashion, with the killing of all inhabitants, the destruction of the village that became a city of the dead.  All villagers, except a handful who escaped, were murdered.

Few of the Nazi perpetrators were seriously punished for their crime. At the French military court in Bordeaux in January 1953, 21 of the SS division were prosecuted, 14 of whom were from Alsace.  Twenty were found guilty, two of whom were sentenced to death and the others to prison for 5 to 20 years. but all were amnestied and within a few years all were released.

The last trial of those involved in the massacre took place in 1983. The individual was sentenced to life imprisonment by the City Court of Berlin, but he was released in 1997.

In January 2014 in Cologne an 88 year old man, a 19 soldier at the time of the massacre, was charged with murder but the case was dropped for lack of reliable documentary evidence.

After World War II  a  new village was built at Oradou, but  General Charles de Gaulle ordered the village should not be rebuilt and that the remains of the original village be maintained.  In 1999 President Jacques Chirac opened a permanent memorial museum that includes items recovered from the burnt out buildings, such as watches stopped at the time the owners were burnt alive. It is the main entrance of this museum, Center for Remembrance, that was vandalized with the inscription “Village of Martyrs” erased and the word “lie” scrawled with graffiti in its place. Shame on those who did it.

President Emmanuel Macron has called the desecration of the memorial an unspeakable act, and vowed that everything will be done to find who was responsible. He is also aware that other anti-democratic attacks, especially antisemitic acts in France have increased. The atrocity at Oradour, though not explicitly antisemitic is yet another attack on the democratic system in France. It follows desecrations in recent years of Jewish cemeteries.  More than 100 graves were defaced at Westhoffen near Strasbourg in December  2019. The cemetery houses about 700 graves, one is that of Leon Blum .In a nearby small commune of Quatzenheim more than 80 graves were defaced with Nazi slogans.

President Macron should implement his call for action “until our dead can sleep in peace.”