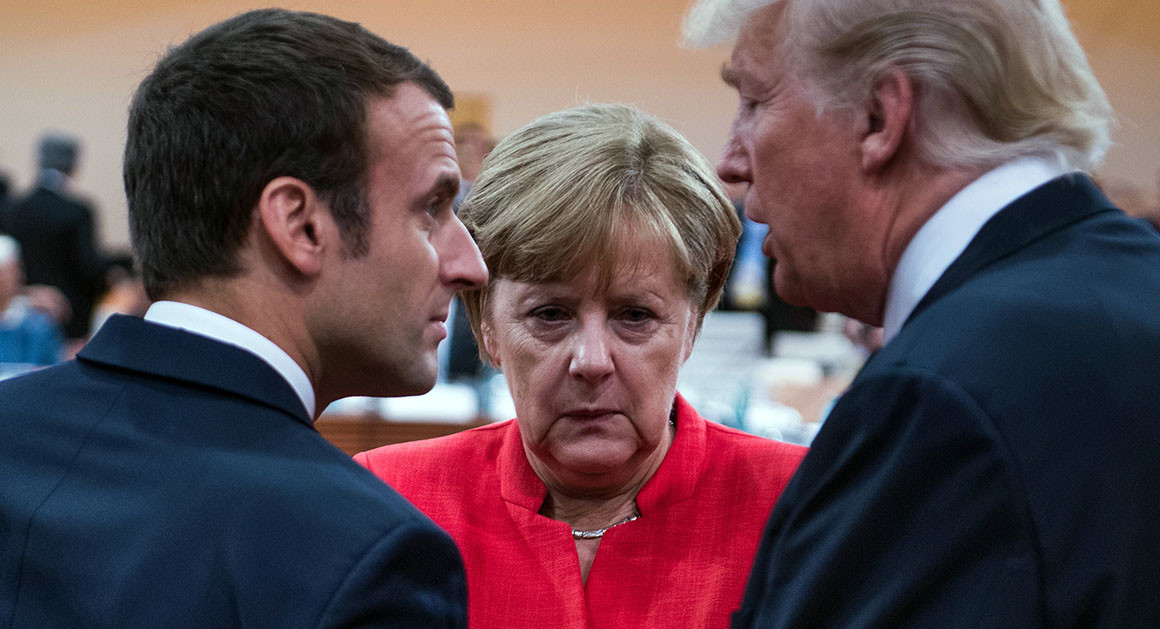 Say it over and over again, never stop saying that anti-semitism is a nauseating disease that must be eliminated. The things they’re saying fill my heart with fear. Proposals for that elimination are not likely to be on the agenda of the meeting on April 27, 2018 in the White House between President Donald Trump and German Chancellor Angela Merkel, but recent events in Germany and other European countries should be of concern.

In contrast to the three day visit to Washington of French President Emmanuel Macron with its striking chemistry between the two presidents, in spite of frank policy differences, especially over the Frenchman’s view’s of a liberal world order instead of the illusion of nationalism, there are few signs of public affection but rather a more difficult personal relationship between Trump and Merkel. Apparently the two have not been speaking for several months. Besides the personal factor, Trump may well see Macron replacing Merkel as the de facto leader of Europe.

Clearly, there are a host of complex political and economic issues for Merkel who was accompanied by a large entourage of senior industrial managers, to discuss. Differences  between the Chancellor and Trump exist on the fair share of the NATO burden not being carried by Germany, international and bilateral trade, free or fair trade, tariffs on whisky, motor bikes, steel, aluminium, and jeans,  immigration, the Nord Stream two pipeline, under the Baltic between Russia and Germany  that will increase European dependence on Russian gas, though Merkel argues that Russian gas makes up only one third of Germany’s gas consumption. The Iran nuclear deal will be obviously be important.

Yet, perhaps some time may be found for an issue symbolically important for Merkel. Germany is a prosperous country and has benefited, politically and economically, from the creation of the European Union. To overcome its Nazi past, it has also tried to prevent the evil ethnic ideology from being resuscitated. It has responded in a variety of ways, with memorials and plaques, and with school education on the Holocaust.

Nevertheless, antisemitism has been on the rise in Germany as in other European countries. In 2017, there were 947 antisemitic incidents recorded in Berlin, an increase of 60% from 2016. and 1,453 incidents in the country. Chancellor Merkel has spoken strongly of the role in this of refugees or people who are of “Arab origin,” who are bringing a different type of antisemitism into the country. Merkl said in April 2018 we must win the fight against antisemitic offenses. For the first time, a new Commissioner for Jewish Life in Germany, Fritz Klein, has been appointed to fight anti-semitism, to help identify causes of discrimination and racism regarding Jews.

There are now 1. 4 million refugees in Germany. Jewish children for some time have been bullied in school by parents and children of Turkish or Arab origin. In addition,  Israeli flags have been burned by pro-Palestinian protestors in Berlin. However, German police statistics attributed much of this to neo-Nazi groups. Clearly, some of this is due to the impact among the young in Germany as elsewhere who are much less knowledgable about  concentration camps and of Auschwitz than their elders.

The issue in Germany has become more contentious in recent weeks as a result of two particular incidents. A 21 year old Israei-Arab deliberately wearing a kippa, yamulka, was attacked and flogged in the streets of Berlin by a man shouting in Arabic. What to do in response? The head of the Berlin Jewish community, Josef Schuster, said that Jews should not wear a yarmulka in public but rather baseball caps or something to cover their head. He was widely criticised for timidity, and a protest demonstration took place in Berlin of over 2,000 of various faiths wearing the Jewish skull cap. Berlin mayor Michael Mueller said “Today we are all wearing kippa. Today, Berlin is wearing kippa.”

In April 2018 a second problem arose. A rap duo, Farid Bang and Kollegah who is a convert to Islam, a very popular group accused of antisemitic lyrics, was awarded an Echo, the German equivalent of Grammy, for the best hip hop album. Their lyrics contained lines: “My body is more defined than an Auschwitz inmate,” and “Another Holocaust comes with a Molotov.” In one of their tracks, in a London office, a banker wearing a Star of David ring is shown in charge of evil in the world. To aggravate the event, the award was given on Holocaust Remembrance day, April 12.

As a result of outrage at the award, some previously honored people gave back their Echos. They included Daniel Barenboim, Argentine-born Israeli conductor of Berlin State opera, and Staatskapelle Berlin, and Christian Thielemann, conductor of Sachsische Staatskapelle Dresden. The organizers of the Echo award then changed their mind and decided not to give the Echo to the rap duo.

Another welcome gesture was by Hamburg officials who broke a large concrete swastika that was buried by Nazis under a sports field, and was once a foundation for a Nazi era monument that once stood at the site and was torn down. However, less welcome is the political party, Alternative for Germany, AfD. One of its leading members is  Bjorn Hocke, member of Thuringia State parliament. He objected to the impressive memorial in Berlin to the murdered Jews of Europe, saying Germans are the only people in the world who plant a monument of shame in the heart of their capital. His call is for no special weight to be given to Holocaust teaching.

His party, the AfD, wants to amend the Criminal Code to “protect Germans” from hate speech, though the law is meant to protect minorities.

Briefly attention can be paid to two other countries, the UK and Belgium.

The British Labour Party never ceases to be troubled by manifestations of antisemitism or equivalent antagonism  to the Jewish State. The latest illustrations are cases concerning some prominent members of the Party, Marc Wadsworth and Mark Dearn. Wadsworth , a leftist activist was expelled from the Party for antisemitic behavior after he had reduced a Jewish woman Member of Parliament to tears and falsely accused her of colluding with the press.

It remains astonishing that Ken Livingstone, MP and former Mayor of London, is suspended from the Labour Party but has not been expelled for his remarks linking Adolf Hitler and Zionism. The irrespressible anti-Israeli Diane Abbott defended the two years delay in dealing with Livingstone. In somewhat cunning fashion, Livingstone argues that stressing antisemitism is bad political tactics because it undermines criticism of the State of Israel, and that it is a diversion from electoral campaigning.

The newest illustration is Labour Party leader Jeremy Corbyn’s “strategy adviser” Mark Dearn, a senior official at War on Want, in effect a War on Israel, which, as does Dearn, supports BDS and helps fund and organize Apartheid Week. The War on Want organized in March 2010 a sit in at a London branch of the supermarket chain Waitrose because it stocked Israeli products from the settlements. Dearn criticized the UN for failing to criticize Israel in the same way it had criticized ISIS.

Some sanity is on display. Belgium Prime Minister, Charles Michel, on April 25, 2018 admonished his own university, Free University of Brussels, for honoring British film director Ken Loach who has won two awards for his films at the Cannes film festivals, with an honorary degree. Michel said no accommodation with antisemitism can be tolerated, whatever the form.

On this, Michel showed sound judgment. Among other things, Loach claims not to be antisemitic and has reaffirmed  that the Holocaust is a real historical event. Yet, when asked if Holocaust denial was unacceptable he replied in less than candid and in questionable language that history is for all of us to discuss. He did profess that the founding of the State of Israel based on ethnic cleansing is there for us to discuss. Loach has for long supported BDS, and among other things called on the band Radiohead, a British rock band, not to perform in Israel. The band however rejected his opinion and did play in Tel Aviv.

Loach is a major problem because his very celebrity makes antisemitism and  BDS, palatable to intellectual, cultured people. The Brussels Free University said it doesn’t need the prime minister’s permission to honor anyone and it is standing by its plan to honor Loach. Fools rush in where angels fear to tread. By its action the University has disgraced itself. One hopes that this was mentioned in the conversation between Merkel and Trump.