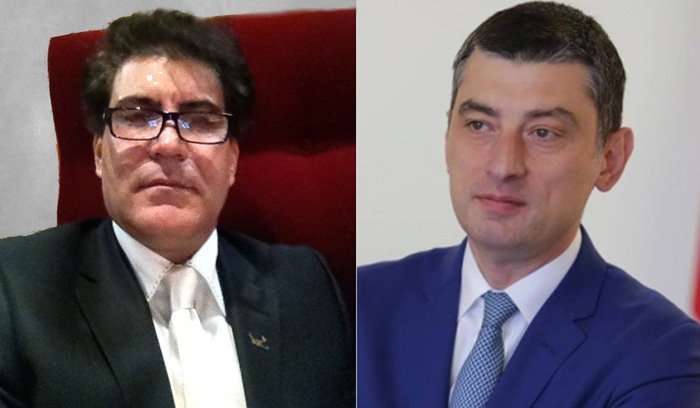 It is not often that an Israel News Talk Radio – Beyond the Matrix interview and New English Review (NER) article triggers a national investigation. But that is what occurred on January 13, 2020 on national television in the Republic of Georgia. The co-authors had interviewed Kenneth A. Timmerman veteran US Iran watcher, investigative journalist and New York Times  best-selling author of Countdown to Crisis: The Coming Nuclear Showdown with Iran.

The January 2020 edition of the NER featured an article version of the interview with Timmerman: Iran Involved in 9/11: The Links Courtcase. It was cited and shown on the broadcast along with an interview with Timmerman. Timmerman said that intensive investigations have unearthed Georgian PM Giorgi Gakharia money laundering and Iran intelligence connections which might ultimately result in his removal from office. The original objective of the INTR-BTM NER interview and article was to free an Iranian defector Alireza Soleimanpak, who was wrongfully arrested and prosecuted in Georgia and sentenced to 18 years on trumped–up charges that he was in Georgia to kill two Iranians. He was in Georgia in what turned out to be a failed attempt to release his brother falsely imprisoned in the notorious Evin prison. His brother was killed by Iranian authorities when Soliemanpak refused an offer of $5 million and a Georgian passport if he recanted his US Court case testimony. Soleimanpak instead demanded that his brother be brought to Tbilisi, Georgia’s capital. That nefarious effort was orchestrated by the Iranian Ambassador to Georgia, an Iran intelligence operative, in league with Gakharia, during the latter’s  term as former Interior Minister. Soleimanpak had provided important witness testimony on Iran links to 9/11 and Al Qaeda in a US Federal Court case.

The following is a summary of the NER article.

Rod Reuven Bryant and Jerry Gordon interview Ken Timmerman, veteran Iran watcher, intrepid investigative journalist, and New York Times best-selling author fresh back from Tbilisi, Georgia with a tale of Iran’s Islamic regime brutality and deception facilitated by the Prime Minister of Georgia. Timmerman reveals in this interview the latest brutal attempt by Iran to cover up its role in the 9/11 attacks.

Georgian Prime Minister Giorgi Gakharia admitted on national television that, when he was Interior Minister, he launched in February 2018, a sting operation, at the request of Iran, against Iran Intelligence defector Alireza Soleimanpak. Soleimanpak provided an “earth shattering” affidavit in the US Federal Court Case in 2011 on 9/11 Al Qaeda-Iran links. Soleimanpak revealed “direct contact between Iran and Al Qaeda; an act of state-sponsored terrorism.” Timmerman also cited recent Iranian terror operations against defectors foiled in the Netherlands, Germany, and Sweden.

Soleimanpak left Germany in 2018, where he had lived since 2002, trying to free his brother imprisoned in the notorious Evin prison in Tehran, following the imprisonment, torture, and death after release of Soleimanpak’s sister in 2016. Soleimanpak was arrested in 2018, imprisoned and tortured by Georgian internal security personnel under trumped up charges that he was planning to murder two Iranians. The Iranian Ambassador in Georgia sent a letter describing the alleged conspiracy to the Georgian Foreign Ministry—one week before it even allegedly began. Before that, he offered Soleimanpak $5 million and a Georgian passport if he would recant his testimony in the 9/11-Iran Links case. Soleimanpak refused. Soleimanpak’s brother was subsequently murdered by Iranian security personnel.

Timmerman notes that Soleimanpak has been detained for 18 months, seven of which were in solitary confinement. Timmerman called Moscow-educated Georgian PM Gakharia, an Iranian “stooge” on Georgian media, following the Prime Minister’s admission that he had ordered Soleimanpak’s arrest.

The New York Southern District Federal Court judge in the 9/11-Links case handed down upwards of $10 billion in two awards made to the certified class of 9/11 claimants in 2012 and 2015.

According to Timmerman, testimony from Soleimanpak and other defector witnesses in the 9/11 Links case showed that Iran gave direct material assistance to the 9/11 Saudi perpetrators. Iran provided a flight simulator for training of the 9/11 pilots on Boeing 747, 757, 767 aircraft. Timmerman noted that the 9/11 Commission only reported that the 9/11 pilots received flight training on small aircraft in the US but left vague the issue of training on jumbo jets.

Soleimanpak defected in July 2001. In his meeting with the CIA station chief and translator in Baku, Azerbaijan, Soleimanpak revealed there was going to be a major attack in the US using aircraft as bombs. He also stated that no Iranians were involved in the attack. The 9/11 perpetrators were all Sunni Jihadi; 15 from Saudi Arabia, the balance from Egypt, Lebanon, and the UAE. Soleimanpak’s warning on July 26th to the CIA team in Baku was that the attack would occur on 20th of Shahrivar, which was misread by the CIA translator as the 10th of September, when in fact it was 9/11. His warning wasn’t heeded. 3,000 lives were lost in the Al Qaeda jihadi attacks on the Twin Towers in lower Manhattan, the Pentagon, and southwestern Pennsylvania.

Timmerman argues that Soleimanpak “was framed—not given a fair trial and no evidence presented.” He noted that the Republic of Georgia has both the strategic interest of the US and the West. It has applied for entry to the EU and NATO. Notwithstanding, as evidenced by the Soleimanpak case, the country needs to reform its legal system to conform to Western and international norms. Timmerman has reached out to both the US State Department and the US House “Georgia Caucus” co-chaired by Adam Kinzinger (R-IL) and Gerry Connolly (D-VA).

PrevU.S. Out of Iraq? By All Means
Swimming Always Against the TideNext