Pence: ‘Radical Islamic Terrorists’ Are ‘the Embodiment of Evil in Our Times’

I would broaden that statement. Islam is an evil religion. It has been a great source of evil since it’s founding. 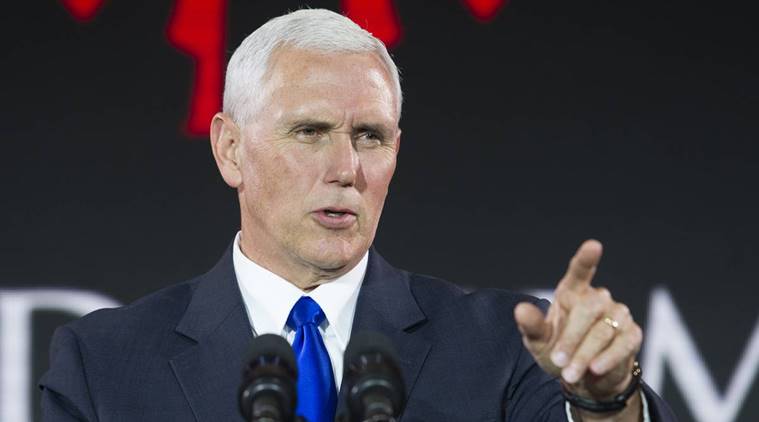 (CNSNews.com) – In a speech at a summit on persecuted Christians hosted by the Billy Graham Evangelical Association, Vice President Mike Pence said Thursday that ISIS is guilty of genocide.

“Practitioners of terror harbor a special hatred for the followers of Christ and none more so than the barbarians known as ISIS. That brutal regime shows a savagery frankly unseen in the Middle East since the Middle Ages, and I believe ISIS is guilty of nothing short of genocide against people of the Christian faith, and it is time the world called it by name,” the vice president said.

“The reality is across the wide world, the Christian faith is under siege. Throughout the world, no people of faith today face greater hostility or hatred than followers of Christ,” Pence said.

In more than 100 countries across the globe “over 215 million Christians confront intimidation, imprisonment, forced conversion, abuse, assault or worse for holding the truths of the gospel,” he said.

“The Christian communities where the message of our Lord was first uttered and embraced today though, are often the targets of unspeakable atrocity. In Egypt just recently, we saw bombs explode in churches in the very midst of the celebration at Palm Sunday. A day of hope was transformed into tragedy,” he said.

“I was just this weekend with the pastor from Egypt who spoke of the images that day of seeing the palms the people carried into church on the ground marked with the blood of the injured,” the vice president said.

“In Iraq, at the hands of extremists, we’ve actually seen monasteries demolished, priests and monks beheaded, and the two millennia-old Christian tradition in Mosul virtually extinguished over night. In Syria, we see ancient communities burned to the ground. We see believers tortured for confessing Christ and women and children sold into the most terrible form of human slavery,” Pence said.

But President Donald Trump “sees these crimes for what they are: vile acts of persecution animated by hatred, hatred for the gospel of Christ,” the vice president said. “And so too does the president know those who perpetrate these crimes. They are the embodiment of evil in our times, and he calls them by name – radical Islamic terrorists.”

“From al Qaeda to Al Shabab, from Boko Haram to the Taliban, these extremist groups seek to stamp out all religions that are not their own or even a version of their own that they approve. Believers from every background have suffered grievously at their hands, and this summit is about calling the attention to the world to those tragic circumstances,” Pence said.

“Now Christianity faces unprecedented threats in the land where it was given life. It’s created an exodus unrivaled since the days of Moses in some communities. In Syria, the Christian population has plummeted from 1 ¼ million to only 500,000 in just the past six years. In Iraq, followers of Christ have fallen by 80 percent in the past decade and a half due to the violence of extremism and angst against Christian communities,” the vice president noted.

“The suffering of Christians in the Middle East has stirred America to act, and it brings me here today. President Trump rightly said not long ago that of the Christian church, ‘nobody has been treated worse in the Middle East.’ He’s made it clear that America will stand by followers of Christ in this hour of need,” Pence said.

He said the Trump administration is “fully committed to bringing relief and comfort to believers” across the Middle East and worldwide.

“This president knows that terrorists will not stop until we stop them, and under President Donald Trump, we will stop them,” Pence said.

“In President Trump, we not only have a leader who calls our enemy by name, we have a president who is confronting those who commit terror not only the home or hut or cave in which they hide,” he added.

Pence said Trump and the U.S. military along with its allies in the region of Iraq and Afghanistan will not rest until ISIS is defeated.

“We will not relent until we hunt down and destroy ISIS at its source,” the vice president said. “Because of the action of President Donald Trump, ISIS is already on the run. Progress in Mosul is tangible, but the fight goes on, and I would say to each of you: persevere in prayer for those who wear the uniform and who are in this fight. Carry them in your prayers.”

PrevSecretary Kelly and the Trump Team Can Beat Sex Trafficking
The U.S. Congress and Vladimir PutinNext