Plaques on the Wall in London 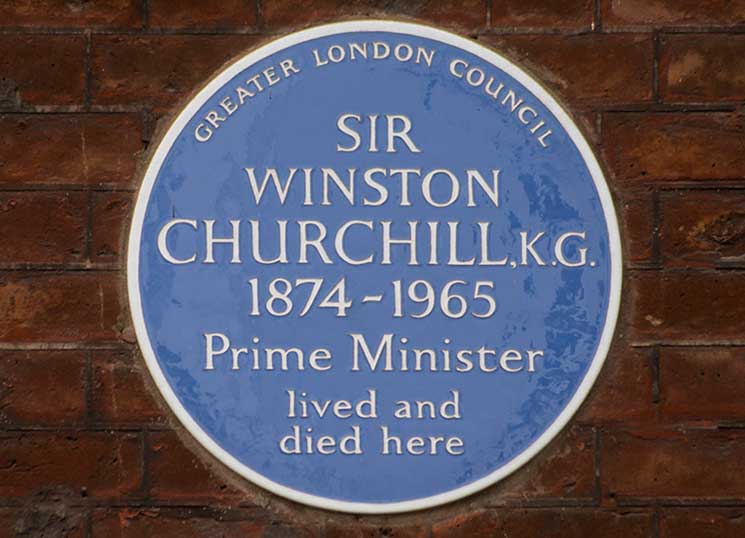 Now I know there’s a happy story yet to come. I tell you things ain’t what they used to be.

The great philosopher Casey Stengel once asked the question, can’t anybody here play this game? Game of politics and historical judgment is more difficult to play than baseball, with no single goal, no sense of final victory, or measure of achievement.

The protests stemming from the death of George Floyd continue, and inspired by the Black Lives Matter movement are occurring internationally as well as in the U.S. The size, the increasing number, and the manner of foreign protests ostensibly against racism and police brutality have been surprising. Most have been peaceful, but a minority have been disorderly and at times destructive. Who would have imagined that an event in Minneapolis would lead to the beheading of the statue of King Leopold II of Belgium in Brussels or the attempt to deface Winston Churchill in London? In all countries the dilemma remains, of how and if history and prominent figures of the past should be venerated if some part of the population finds them objectionable..

Interestingly. we know of the problem from a well known authority in meddling in American affairs. President Vladimir Putin on June 14, 2020 spoke of the “deep internal crisis” in the U.S. Russia, he said, and earlier the Soviet Union, had sympathy for the fight of African-Americans for their natural rights. But, he continued, when protests turn into mayhem and pogroms, he saw nothing good for the U.S.

How to judge whether individuals should remain honored or erased with historical cleansing? Three initial problems are immediately evident: one is that the failings of individuals are usually not central to why they are honored; a second is that no individual is without faults; a third is the historical context of the actions or behavior of individuals.

In democratic systems there is inevitable tension, perhaps contradiction, between adherence to universalist principles, whether stated as liberty, equality, and fraternity. and the realities of public action, past and present. In the present case in the conversation resulting from the brutality against Floyd, the world is caught up not only in the issue of racism but equally in the issue of whether colonialism and imperialism is to be seen as a series of crimes against humanity or as having brought benefits to civilization.

For some protestors in the U.S. there is little tension. As a minimum, the monuments and symbols of the Confederacy are being removed or toppled. Part of the culture of the country is being erased with the elimination of reminders of Thomas Jefferson in Oregon, or Jefferson Davies. Yet the actions do not have the magnitude of those in other countries, particularly the Soviet Union in Stalinist years when people were erased physically by Cheka under Feliks Dzerzhinsky and the KGB and simply from photographs.

The death of George Floyd, and the impact of the Black Lives Matter movement has convulsed British affairs, though race is not as divisive an issue as in the U.S. Yet demonstrations in Britain have echoed those in the U.S. as in attacks on historical fugures.

Only a small number accused in Britain of being associated with slavery or colonialism have suffered the fate of having their monuments being destroyed of removed, but the likelihood is that others may follow. Monuments have been targeted in 39 British towns and cities, 12 in London. In Oxford, Cecil Rhodes is precarious, as many members of the faculty in Oriel College, Oxford argue, as have students,  holding he should be removed from his place on the College walls to a museum and “properly contextualized.” Sir Arthur Harris, Bomber Harris, RAF Commander in Chief during World War II, oversaw bombing raids on Nazi Germany, but his monument in The Strand in London is threatened because of “colonial warmongering” in Rhodesia. Well wishers are guarding the statue of the celebrated writer George Eliot who is threatened, though she was an opponent of slavery and antisemitism. If the Labour Party comes to power, more toppling will occur as its spokespeople have asserted it will review the appropriateness of monuments and statues on public land and council property.

There is an overlap between those facing toppling and those whose blue plaques may be removed from the walls of London, notable examples are Nelson, Kitchener, Capt. James Cook, Robert Clive, Columbus. The English Heritage, the successor to four previous institutions, is a charity organization that manages more than 400 historic  monuments, buildings, and palaces. Many of them, such as Stonehenge, have become tourist attractions. Now it is planning to review the plaques, mostly blue, historical markers  in public places that commemorate a link between the location of the plaque and individuals who have lived or worked there. Most of the proposals for installation of a plaque is made by members of the public, and about one-third are approved in principle and put on a short list.  It takes about three years   for a proposal to reach the top of the list.

The English Heritage is planning to review the 950 plaques in London for links to racism or slavery issues. It also wants to put up plaques to honor more people  from ethnic minorities.

Who to eliminate and take off the wall? In this who’s who list one can mention some of the 950 plaques that refer to people in all backgrounds, mostly British but also many foreigners.

A new development has occurred in the educational field. A letter signed by Professor Louise Richardson, Vice-Chancellor of Oxford University, and 34 other principals of Oxford Colleges says that  Floyd’s death was a manifestation of institutional racism, and that the University was determined to support their black students in every way possible. His death had a traumatic  effect on black students who were likely to do less well in examinations. Therefore, black students can apply for changes in the result of their exams. Other British colleges, University College, London, Newcastle, and Sheffield, have adopted the same idea, confirming that black students would be allowed leniency in their grades.

A new claim by protestors is that murals that line the staircase in the headquarters of the British Foreign Office be removed. These are five large murals, completed between 1914 and 1921, which are supposed to be images of the origin, development, expansion, and triumph of the British Empire, ending with the Covenant of the League of Nations. The complaint focuses on the nature of the murals. One depicts a small naked black boy, surrounded by whites, presenting a basket of fruits. A second represents Anglo Saxons arriving in the country and taking possession of Britannia, thus illustrating for critics the racial superiority of Anglo Saxons over Celts and Romans.  A third is the picture of Britannia ruling the waves and seeing her sons going to create a world empire.

Clearly, there are ethical issues with the British historical figures involved in slavery or imperialism. The analysis of the 950 plaques being undertaken now by English Heritage is commendable in the effort to discern the validity of the criticism of particular individuals. No violence is required for this task, performed rationally and objectively. Meanwhile, Londoners and visiting Americans can enjoy looking at the place where Charlie Chaplin lived.

PrevRight-wingers ridiculed by new ‘statue’ which has been mysteriously put right next to Edward Colston’s
Mahmoud Abbas Threatens – Ruat Caelum! – to Let the P.A. CollapseNext