This is an attack on my class, my ethnicity and my people. And there’s nothing I can do about it. If we stand up for ourselves we are shouted down and jeered at as ‘chavs’, ‘gammon’ (although gammon can also be middle-class) or racists.

From The Indy 100 (a precis of the leftie Independent for those members of the chattering class with a short attention span – and yes that may be a petty snipe, pot – kettle – black etc, but petty snipes are my only weapon at the moment) and the Mirror.

Bristol has a new “statue”! It’s been placed next to the empty plinth where a figure of slave trader Edward Colston once stood.

In a joking nod to the stereotype of the “all lives matter” demonstrators who gathered on Saturday in Bristol to “protect” the Cenotaph, the papier mache figure atop a bin is a large bald man sporting a string vest. The grey figure that appeared Monday morning in one hand is holding a small globe, and in the other, a phone with a text that reads “England for the English.”

The words “Spoiler alert: St George was Turkish” are stencilled on the wheelie bin. 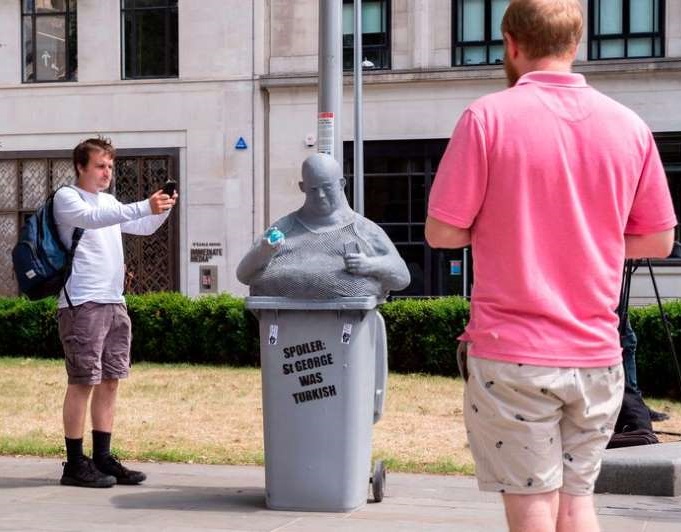 “It’s clearly a response to the people who came out to guard the Cenotaph against nothing on the weekend, the artist doesn’t seem to hold them in very high regard,” an onlooker told Bristol Live. “It’s quite clever. They’re obviously telling anyone with that kind of belief to get in the bin,”

Some were not pleased, however, with the representation of the protestors. One Twitter user said the statue “demonises and stereotypes the English working-classes.” On Saturday, hundreds of right-wing protestors gathered with signs saying “not far right” in front of the Cenotaph in Bristol city centre. “All lives matter” was also written on the banners.

Black Lives Matter approve. Who did this? Well done   Hilarious

The Mirror seems to have some recollection of their working class origins and core readership as they put the reader right about St George.

The assertion on that wheelie bin that St George was Turkish is factually incorrect.

While most historians agree the early 4th century Christian martyr St George was born and grew up in Cappadocia, which is in what today is modern Turkey, George himself was a Cappadocian Greek, and not Turkish.

The Kingdom of Cappadocia was an independent kingdom until it was taken over by the Roman Empire in the 1st century, and St George would have regarded himself as either Greek or a Cappadocian Greek.

Turkish people did not migrate to the land now called Turkey until hundreds of years later, from the 6th to the 11th century, where they eventually formed the Ottoman Empire. An inconvenient fact, often overlooked when aspersions are thrown at the English, that the Anglo-saxons didn’t arrive on our island in any numbers until the 4th century.

St George is the patron saint not just of England, but is also venerated in Catalonia and Aragon in Spain, Austria, Ethiopia and Georgia, which is named after him. I have also heard antifa chanting that he was ‘Palestinian’, which he definitely wasn’t. But why does it matter? No-one throws scorn on the Scots because St Andrew wasn’t Scottish? Or St Patrick Irish, although he did spend the greater part of his life in Ireland.

Apropos of nothing, having not seen a man in a string vest, that stereotype of the uneducated white worker, since 1969 I looked to see if they are still available – and indeed they are. Very popular with Jamaican young men, and very fetching he looks too.