A new police uniform has been developed specifically for Muslim women in an attempt to recruit more black and minority ethnic officers. West Yorkshire Police is the first force in the country to launch the new loose fitting uniform ‘designed not to show the female form’, bosses said. It is hoped the uniforms will improve race equality among applicants after police chiefs were told to do more to appeal to BAME recruits.

The force – like many across the country – already allowed female officers to wear the hijab. Assistant Chief Constable Angela Williams said: ‘For the last month we have been trialling a new uniform for women which is designed not to show the female form. This was suggested by a Muslim female officer and was designed by our Clothing Manager in conjunction with the officer. The tunic is a looser and longer fit, and has full sleeves. This has been well-received from officers in the force and we have now made further supplies of this uniform for other officers to trial it if they wish. . . I hope this uniform will encourage people from underrepresented groups to consider a career in policing if they had previously been put off joining the force due to the uniform.’

Bradford-based PC Firzana Ahmed became the first to wear the new uniform which, she said, had attracted ‘positive feedback from the local community’.

West Yorkshire Police and Crime Panel had quizzed police chiefs on Friday about what they were doing to boost the number of BAME recruits. Panel member Roger Grasby said the force had seen some success in boosting the number of staff who were female, disabled or lesbian, gay, bisexual or transgender (LGBT) but ‘less so with BAME’. 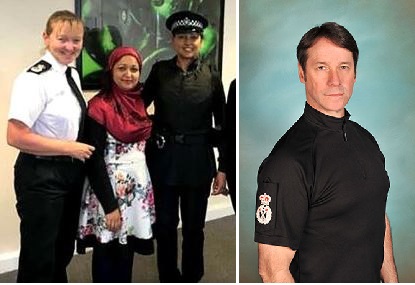 It isn’t that long since West Yorkshire Police changed their uniform to a gender neutral black nylon shirt which according the the Federation (police union) was “a hit with officers” They admitted it wasn’t smart like the traditional white shirt, collar and tie, but hey, what did smartness ever have to do with a uniformed force? And as the new vests are more comfortable under body armour, and “Due to their dark colour the new shirts are more suitable for the day-to-day rigours of active duty” (blood? dirt? what sort of dirt?) that speaks volumes for the sort of area they have allowed West Yorkshire to become under their protection.

Above from left to right, at the Muslim Women’s Council in Bradford a policewoman wears the old uniform which is being phased out in favour of a ‘doesn’t show the blood’ black nylon top, and PC Firzana Ahmed wears the newest of the new uniform in sharia compliant modest form. The woman in between isn’t, so far as I know a copper. Right Chief Constable Mark Gilmore models the new, all ranks, roles and unisex black casual police top.

PrevActivist journalism in the age of Trump
Spies: Enticing and OtherwiseNext