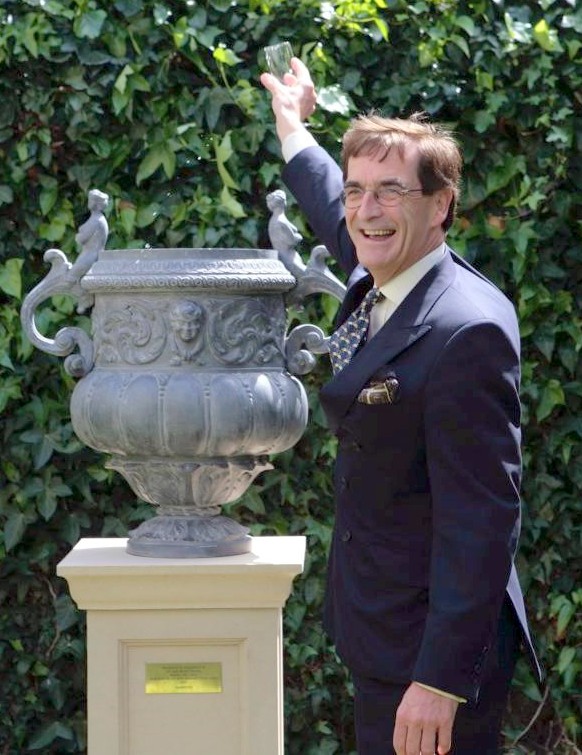 A very much truncated obituary was published in The Architectural Historian 8 (March 2019) 21-2. The editor has granted permission to use this full uncut version.

On 24 September 2018, in the Minster, King’s Lynn, was held the dignified and beautiful Requiem in the Tridentine Rite for the late David Watkin. The Mass, in Mozart’s glorious K.626 setting, conducted by Michael Waldron, was sung and played by the London Choral Sinfonia, with soloists, and celebrated by Father Ronald Creighton-Jobe, assisted by Father Julian Large, Provost, both of The London Oratory, and Mr Richard Hawker. The eloquent, affectionate, extempore Homily was given by Creighton-Jobe, and the sensitive Eulogy was delivered by Professor Sir Roger Scruton.

It was a perfect send-off for a great intellectual who hugely valued the immense legacy of the Classical tradition, seeing in it aspirational standards, yet also offering infinite adaptability as relevant today as it had been in Graeco-Roman Antiquity. He championed architects who had painstakingly acquired and honed their Classical skills in the teeth of Modernist bullying, and wrote sympathetically and supportively about the oeuvre of Quinlan Terry,[1] John Simpson,[2] and others. In 1952 Henry Hope Reed (1915-2013) had the temerity to suggest that most contemporary architecture was fraudulent, intellectually empty, ugly, and illiterate: convinced that Classicism embraced an architectural language capable of modern use, he published his views, and founded (1968) Classical America to promote the cause. This struck chords with Watkin, who, in 2013, was honoured with the Henry Hope Reed Award by the University of Notre Dame, Indiana, then unique in that it taught the practice of traditional and Classical architecture.

Watkin followed his beloved older sister, Valerie (Mrs John Hess), to Cambridge (she went up in 1955, one of the earliest girls at New Hall), where he read English at Trinity Hall, but even as an undergraduate he enjoyed expeditions to see examples of historical architecture. Watkin’s hunger for beauty and tradition led to his reception into the Roman Catholic Church, largely under the influence of Alfred Newman Gilbey (1901-98), who, from 1932, was Chaplain to RC undergraduates at the University, and cut a fine figure in the city, clad in frock-coat and broad-brimmed cappello romano hat. It was a source of some pain to Watkin when much of the beauty of the Roman Rite was jettisoned after the Second Vatican Council, and an orgy of destruction (likened to ‘slum-clearance’ in the views of certain philistine clerics) followed. These events strengthened Watkin’s antipathy towards liberalism and ill-considered, iconoclastic Modernism. His beliefs, anchored in tradition, fastidious dress, the Church, and Classicism, were confirmed.

Watkin was one of the first undergraduates to study in the Art History Department created by Michael Jaffé (1923-97), and later worked on his Doctorate, for which his supervisor was Nikolaus Pevsner (1902-83): it concerned late-Georgian and Regency collecting and patronage, and was published as Thomas Hope 1769-1831 and the Neo-Classical Idea (1968). Hope was revisited in the substantial volume Watkin edited with Philip Hewit-Jaboor (2008) which accompanied the major exhibition at the V&A.

In 1967 Watkin was appointed Librarian to the Faculty of Fine Art, and to the consternation of some, became a Fellow of Peterhouse (1970), where his rooms were furnished in impeccable taste, with a predominantly Regency flavour. Like Gilbey, he believed that Chaos lay all around, and that it should be the duty of all those who care and have standards to impose aesthetic, moral, and spiritual Order: it was also clear to him that although it had once been the Classical Architect’s aim to create Order out of Chaos, the Modernists created Chaos where once there was Order.

Many studies followed, including a monograph (1974) on C.R. Cockerell (1788-1863), one of the least pedantic of English architects working within the Classical tradition, whose career, Watkin argued, had been blighted by the Gothic Revival, with its fake claims to ‘morality’. With Robin Middleton he brought out Neo-Classical and Nineteenth Century Architecture (1977), but in the same year the Clarendon Press published his Morality and Architecture which outraged the Lib-Lab Gerontocracy, especially paid-up disciples of Modernism. P.R. Banham (1922-88), raising his eyes from the intellectual content of Playboy, denounced Watkin for displaying a ‘kind of vindictiveness of which only Christians seem capable’; S. Bayley called the book  an ‘added, sly, knowing, superior, rancorous smarmy, sneering stinker’; and S. Lyall referred to a ‘waspish and spiteful’ text. Watkin’s objections to Pevsner’s style as a supervisor, not least his ‘secular moralising’, disturbed a hornet’s nest of criticisms: the obtuse did not get the point at all. That important book, undermining many of the bogus arguments underpinning Grand Narratives of Modernism, and slaughtering many sacred cows and entrenched beliefs, came under hysterical attack. The author and his work were subjected to vulgar abuse by those with vested interests in continuing to promote the Cult of Modernism, so the vicious denunciations of Watkin’s slim volume were for all the wrong reasons.[3] I was among the few at the time to write a favourable review.[4] Watkin wrote to me to thank me, and invited me to dine at Peterhouse, thus beginning my long association with a college where I was twice honoured with a Visiting Fellowship, and where I very frequently enjoyed his sparkling company at High Table and afterwards in the Combination Room.

Work in Sir John Soane’s Museum led to the publication of the enormous book on Enlightenment Thought and the Royal Academy Lectures (1996—which won the Sir Banister Fletcher Prize), but there were many other substantial tomes, not least English Architecture (1979), The English Vision (a study on the Picturesque [1982]), A History of Western Architecture (1986), a wonderful introduction to German Classicism (written with Tilman Mellinghoff),[5] and The Architect King: George III and the Culture of the Enlightenment (2004). In 2001 he became Professor of the History of Architecture, University of Cambridge, retiring in 2008, after which his friend Paul Doyle organised his move to a 16th-century house in the centre of King’s Lynn, in which the library (containing many items from the collection of Monsignor Gilbey) was designed by John Simpson.

A generous man, he unstintingly shared information, and was always supportive of young scholars who entered his orbit. Fastidious in dress and speech, good taste (evident in his aesthetic judgements) was a matter of great concern to him, thus he often attracted opprobrium from those favouring what they imagined to be proletarian attitudes and garb. Such ovine conformists sneered at Watkin’s sartorial style, but, unlike them, he cared about, and was invariably kind, to those less privileged than was he, notably college staff at Cambridge, who were devoted to him.

His wit was mischievous. I recall visiting Weimar with him: clutching a 1936 Baedeker, with a completely straight face he enquired of a passer-by the whereabouts of the Adolf-Hitlerstraße. The startled fellow ran off like a frightened rabbit.

Watkin was a complex human being, and a fine scholar. Fiercely loyal and supportive of his friends and academics he respected, he also loved his immediate family very deeply. He will be hugely missed, not least by this obituarist.