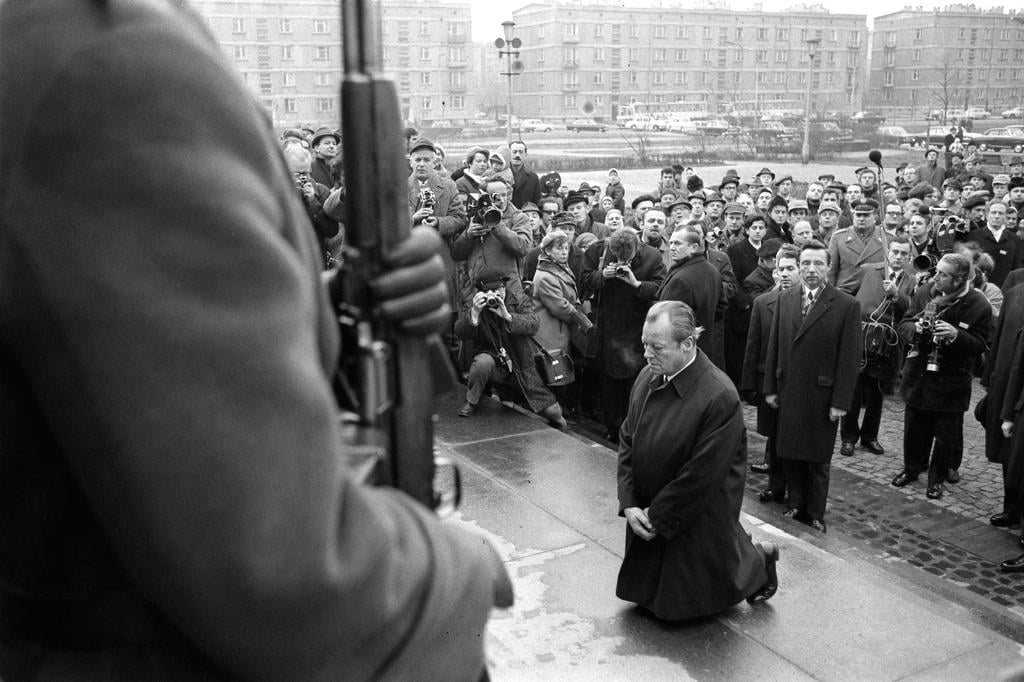 German Chancellor Willy Brandt kneeling at the site of the Warsaw Ghetto, December 14, 1970

No, je ne regrette rien, rien de rien. I do not regret anything. It is paid, swept away, forgotten. Like Edith Piaf, most people, including political figures and public and cultural institutions, let bygones be bygones, and do not have the words “I’m sorry” or “I apologize” in their vocabulary. More familiar is the maxim, variously attributed to Winston Churchill or Benjamin Disraeli, “Never apologize, never explain.” It is rare for a sincere and honest apology to be offered for a mistake in policy or action.

In June 2021 the British Royal Academy did so in what is a remarkable example of admission of moral wrongdoing, expressing regret, acceptance of responsibility, genuine repentance, and attempt to make amends. The RA apologized for withdrawing the work of an artist who had expressed transphobic views in a 2019 blog, stating its original decision was a betrayal of its most important core value, the protection of free speech. The RA is to be complimented on the courage of its new decision, especially now that some of its students have been angered by the apology, arguing that it had given legitimacy to transphobia, and that “trans liberation is an endeavor of global importance that addresses classicism, racial justice, and healthcare reform.” The reality is that it is the RA, not the angered bigoted students, who uphold beliefs in the importance of plurality of voices and free thinking.

Throughout history apologies, though rare, have been meaningful. In 1077, the Holy Roman Emperor Henry IV apologized to Pope Gregory VII for conflicts over the precedence of ecclesiastical or secular power by standing in the snow for three days and nights at Canossa. King Henty II apologized for the assassination by his four knights in 1170 of Archbishop Thomas a Beckett in Canterbury Cathedral. In 1697 a judge and jurors apologized for the witch trials in Salem in 1692. Henry Ford in 1927 apologized for his antisemitic campaign in The Dearborn Independent.

One of the most moving events was the gesture on December 14, 1970, of German Chancellor Willy Brandt laying a wreath and kneeling at the site of the Warsaw Ghetto, and expressing guilt for the Holocaust. On October 2, 2019, Canada officially apologized to the First Nations and Inuit people for discrimination and harm, and asked for forgiveness.

In modern times we are familiar with prominent political individuals who avoid full apologies for their statements or actions, but limit themselves to express some form of regret, or deny they did anything wrong, or escape responsibility by using impersonal language or the passive voice saying, “mistakes were made.” Three responses of this kind came from then Democratic President Bill Clinton, former Republican Governor of South Carolina Mark Sanford, and Republican Georgia Representative Marjorie Taylor Greene. Bill Clinton at first stated “I did have a relationship with Miss Lewinsky that was not appropriate. He later admitted his relationship was not appropriate, and then later still in June 2004 admitted to a “terrible moral error,” but no apology.

Governor Sanford finally admitted an affair with an Argentinian businesswoman, and confessed, “I have been unfaithful to my wife, and all I can say is that I apologize.” Representative Greene in June 2021 had compared mandates on wearing masks in Capitol Hill to the Holocaust. After visiting the US Holocaust Museum in Washington, D.C., Greene altered her tone. Her remarks, she said, were offensive, and she wanted to apologize. “I made a mistake… there is no comparison to the Holocaust.”

Not all politicians are equally forthright. New York Governor Andrew Cuomo was accused in 2021 of allegations by several women of sexual harassment, as well of misleading the public of COVID-19 deaths in nursery homes.  He denied any wrongdoing and questioned the motives of his accusers, and claimed to be victim of a smear campaign.  In defending himself, Cuomo explained his interactions may have been insensitive or too personal, and that some of his comments, given his position, made others feel in ways never intended: “I mean no offence.”

A generation earlier, equivocation over apology can be seen in the case in 1992 of Sen Bob Packwood accused of sexual harassment of at least ten women. He was obliged to resign from the Senate.  What is one to make of his later non-apology and its verbal dexterity?  “If any of my comments or actions have indeed been unwelcome   or if I have conducted myself in any way that has caused any individual discomfort or embarrassment, for that I am sincerely sorry. My intents were never to pressure, to offend, nor to make anyone feel uncomfortable, and I truly regret if that has occurred with anyone either on or off my staff.”

It is refreshing to peruse some more direct statements of European politicians.  In the UK. Heath Minister Matt Hancock, a married man who had a sexual affair, resigned from his office on June 26, 2021 after admitting he had broken social distance rules after photos were published of him kissing a female aide. Hancock declared he did not want his private life to distract attention from government policy in fighting the pandemic. He apologized to the Prime Minister Boris Johnson and to his family. Johnson accepted his apology and thought the matter was closed, but Hancock decided to step dowm. He explained that “government owe it to the people, who have sacrificed so much in this pandemic, to be honest when we have let them down.”

It is pleasant if unexpected to encounter a direct personal statement, free of any ambiguity or uncertainty. German Chancellor Angela Merkel reversed her decision, because of public pressure, on her plan for an Easter lockdown in 2021. She apologized for this flawed idea.

“This mistake is my mistake, only my fault, because in the end I have the ultimate responsibility as Chancellor.”

Similarly forthright is Scotland’s First Minister Nicola Sturgeon who has apologized for mistakes. In August 2020 she stated that her government “did not get it right over the grading of Scottish exam results, a system based on teacher assessments.  In December 2020 Sturgeon was photographed without a mask, breaking COVID rules. “I want to be clear,” she said, “that regardless of circumstances, I was in the wrong.”

French President Emmanuel Macron has been less forthright with his strategy of accepting responsibility for part but not all of an offence.  In January 2021, though he recognized  the crimes France had committed in Algeria, ruled out an official apology for the French occupation of Algeria or the bloody eight year war. In May 2021 Macron visited Kilgali, Rwanda, on the 27th anniversary of the Rwanda genocide, and recognized the extent of French responsibility for the genocide. He asked for forgiveness for his country’s role, but stopped short of an apology. France, he declared, was not an accomplice.

In a long overdue action, the family of the well know writer Roald Dahl “deeply apologized” for the lasting and understandable hurt caused by some of Dahl’s statements: “Those prejudiced remarks are incomprehensible to us and stand in marked contrast to the man we knew.” Yet the Dahl family had waited more than thirty years to make an apology, and that apology should have been more open. Dahl’s virulent antisemitism has long been known. In an interview in 1983 he said he believed “there was a strain in the Jewish character that does provoke animosity.” In 2018 the British Royal Mint decided not to issue a commemorative coin on Dahl’s 100th anniversary of his birth because of his antisemitic views.

Roald Dahl has returned indirectly. In 1983 he published a book The Witches in which the witches have thin curvy claws, like a cat, and with gloves to hide them. In June 2021, the Hollywood Warner Brothers big budget version of The Witches was released. The star of the film is Anne Hathaway, who plays the character of the Grand High Witch is made to look sinister by picturing her ectrodactyly, split hand with three elongated fingers on each hand and  toe less feet. This equating of physical differences with villainy was criticized as insensitive to disabled people. Anne Hathaway apologized for her portrayal of disability, saying she had recently learned that many people, especially children, are in pain because of the portrayal of the Grand High Witch.

Another entertainment star Lin-Manuel Miranda, creator of Hamilton, has had to face the truth about diversity. He made the film In the Heights, a musical set in the Washington Heights neighborhood in Manhattan, NYC, a largely Dominican neighborhood. As soon after the opening of the film, Miranda, composer and lyricist, was criticized and apologized for the alleged lack of sufficient darker colored Afro-Latinos in the film. He added, in unrelated rhetoric, he could hear the hurt and pain over colonialism.

Miranda said he was trying to paint a mosaic of the Afro-Latino community, but fell short, and was truly sorry. Whether this was an honest apology or an evasive and vague response to criticism remains to be seen. However, Miranda’s case brings up the central issues how many dark skinned actors would be enough to be immune from criticism of colonialism, and who is to decide. How to define the dimensions of diversity in art and in society when some group may claim not to be included?