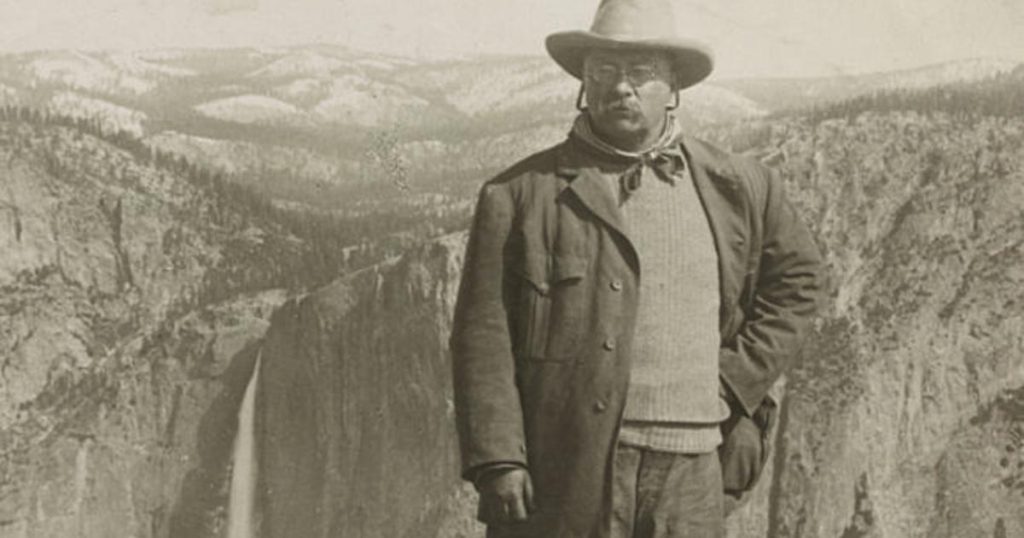 It can be said that Teddy Roosevelt is one of the most popular presidents, at least for those of us who have any knowledge of American history, which nowadays seem to be few, considering all the acid, vicious, cynicism that is spattered willy-nilly. Some figures in American history, Washington, Jefferson, Reagan, if alive today, one would be awestruck and hesitant to approach. Lincoln would be the same, except that he had a fantastic skill at putting people at ease and laugh hearing one of his never ending supply of stories.

With Benjamin Franklin, on the other hand, one could easily sit with him, feet propped up, and talk with him about anything over a beer. And Teddy Roosevelt is the same. He was equally at ease with roughnecks and aristocrats, with an almost manic disposition in his activities, a prolific author who once joined a Brazilian expedition into the Amazon. The man was a pillar of integrity and honor from a time when those words meant something. T. R. was a trust buster and he was a consummate conservationist, having a deep love of Nature. He was also brilliant and would have made a great scientist, a profession which he considered. This is one man who truly grasped life with both hands.

T.R. wrote his autobiography which is a work that should be mandatory reading in high schools and universities but will not be, given the present climate of indoctrination. It not only documents his private and political life, fighting corruption at every level of government, but he also writes down the principles by which he lived and, needless to say, it is a historical document. His principles are as appropriate today as they were over a century ago and, in a way, it is depressing to realize that the same corroding sophistries and they same corrosive personalities are still active in undermining society which indicates that the struggle against evil, in all its manifestations—whether in crime, in incompetence, or in cowardice—will never end.

Here, then, are some of his observations from the autobiography:

Women should have free access to every field of labor which they care to enter, and when their work is as valuable as that of a man it should be paid as highly.

I have always had a horror of words that are not translated into deeds, of speech that does not result in action.

The relationship of man and woman is the fundamental relationship that stands at the base of the whole social structure. Much can be done by law towards putting women on a footing of complete and entire equal rights with man—including the right to vote, the right to hold and use property, and the right to enter any profession she desires on the same terms as a man.

…my slowness in grasping the importance of action in these matters was the corrupt and unattractive nature of so many of the men who championed popular reforms, their insincerity, and the folly of so many of the actions which they advocated.

I have not a particle of sympathy with the sentimentality—as I deem it, the mawkishness—which overflows with foolish pity for the criminal and cares not at all for the victim of the criminal. I am glad to see wrong-doers punished. The punishment is an absolute necessity from the standpoint of society; and I put the reformation of the criminal second to the welfare of society. But I do desire to see the man or woman who has paid the penalty and who wishes to reform given a helping hand—surely every one of us who knows his own heart must know that he too may stumble, and should be anxious to help his brother or sister who has stumbled. When the criminal has been punished, if he then shows a sincere desire to lead a decent and upright life, he should be given the chance, he should be helped and not hindered; and if makes good, he should receive that respect from others which so often aids in creating self-respect—the most invaluable of all possessions.

[On journalists:] “They were not robust or powerful men; they fell ill at ease in the company of rough, strong men; often they had in them a vein of physical timidity. They avenged themselves among themselves for an uneasy subconsciousness of their own shortcomings by sitting in cloistered—or, rather, pleasantly upholstered—seclusion, and sneering at and lying about men who made them feel uncomfortable.

Too many thoroughly well meaning men and women in the America of to-day glibly repeat and accept—much as medieval schoolmen repeated and accepted authorized dogma in their day—various assumptions and speculations by Marx and others which by the lapse of time and by actual experiment have been shown to possess not one shred of value.

A primeval forest is a great sponge which absorbs and distills the rain water. And when it is destroyed the result is apt to be an alternation of flood and drought.

While [I was] Police Commissioner we punished any brutality by the police with such immediate severity that all cases of brutality practically came to an end. No decent citizen had anything to fear from the police during the two years of my service.

It seems to me that our attitude should be one of correcting the evils and thereby showing that, whereas the Populists, Socialists, and others really do not correct the evils at all, or else only do so at the expanse of producing others in aggravated form; on the contrary we Republicans hold the just balance and set ourselves as resolutely agents improper corporate influence on the one hand as against demagogy and mob rule on the other.

When I took the Presidency, it was a common and bitter saying that a big man, a rich man, could not be put in jail. We put many big and rich men in jail: two United State Senators, for instance, and among others two great bankers, one in New York and one in Chicago.

Among the most dangerous criminals, and especially among those prone to commit this particular kind of offense, there are plenty of a temper so fiendish, or so brutal as to be incompatible with any other than a brutish order of intelligence; but these men are nevertheless responsible for their acts; and nothing more tends to encourage crime among such men than the belief that through the pleas of insanity or any other method it is possible for them to escape paying the just penalty of their crimes.

[On what Lincoln called “silk stocking reformers:”] These parlor reformers made up for inefficiency in action by zeal in criticizing; and they delighted in criticizing the men who really were doing the things which they said ought to be done, but which they lacked the sinewy power to do. They often upheld ideals which were not merely impossible but highly undesirable, and thereby played into the hands of the very politicians to whom they professed to be most hostile.

[While running for the office of the Presidency:] Practically all the metropolitan newspapers of largest circulation were against me.

It is truly depressing to realize that although in the past we have had men of titanic intelligence, integrity, honor and patriotism, men like George Washington, John Adams, Thomas Jefferson, James Madison, Abraham Lincoln, Grover Cleveland, Theodore Roosevelt, and Ronald Reagan, we have had since then men like Jimmy Carter, George W. Bush, as well as the heads of crime families Bill Clinton and Joe Biden. The latter two have done for the White House what the Borgia crime family did for the Papacy. And it speaks volumes regarding the present state of our country that the statue of Teddy Roosevelt was removed from the American Museum of Natural History in New York City and another of his statues topped in Portland by Communists.

Armando Simón is the author of A Cuban from Kansas, When Evolution Stops, Very Peculiar Stories and Orlando Stories.