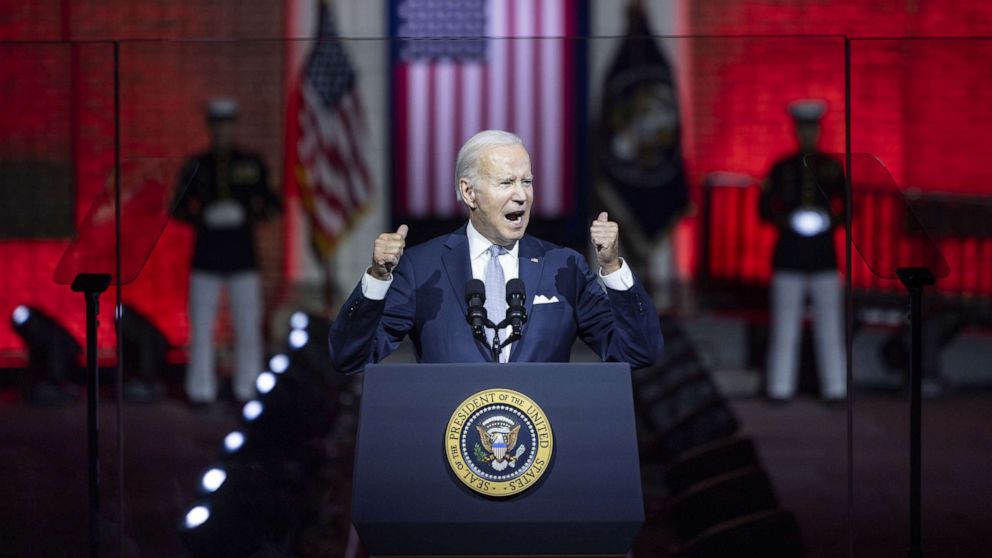 Can someone help a semi-retired mystery writer? I have written eight detective novels but have not been able to figure out definitively who wrote President Joe Biden’s speech for the night of Sept. 1, 2022.

Was it the Pulitzer Prize-winning historian John Meacham? White House chief of staff Ron Klain? Someone working undercover for Islamic Jihad anxious to create a conflagration in our country?

Crazy as it sounds, given the text, the latter doesn’t seem all that unlikely.

History needs to know who wrote such moving and “uniting” rhetoric as “MAGA Republicans have made their choice. They embrace anger. They thrive on chaos. They live, not in the light of truth but in the shadow of lies.”

And “Donald Trump and the MAGA Republicans represent an extremism that threatens the very foundations of our republic.”

Someone needs to take a bow. After all, it is well known that Peter Robinson wrote “Mr. Gorbachev, tear down that wall.” He has gotten much-deserved credit for that. Who is behind these enlightening and forward-looking statements of Biden’s?

We know it is obviously not the president himself since he was happy to “borrow” the words of others as far back as law school and continued to follow that tradition, after promising his dean never to lie again, by stealing the speeches of Neil Kinnock and Robert F. Kennedy, among others.

Now, in his rather extreme dotage, it is nigh impossible that Biden would write his own speeches. So who dun it?

And while we’re at it, who designed the weird, darkly-lit set behind him out of some sixties B-Roger Corman horror movie with two Marines standing ominously on either side?

The aim of both speech and set was clearly to incite, to drive his opponents into the streets and foment trouble, thereby gaining traction for his “more noble” side and leading to the extinction of the so-called “deplorables,” all tens of millions of them.

This similarity between this and the events of Jan. 6 couldn’t be more obvious.

Fortunately, not that many watched this speech. Even the networks, following their bottom lines and some semblance of “equal time” guidelines, stayed with normal programming. Besides, it was college football night plus the U.S. Tennis Open, which I watched despite (in my view) its excessive encomiums to Serena Williams and the (Biden and co. dictated) absence of the great Novak Djokovic.

Still, it’s of great importance to know who is putting their words into the mouths of our leaders. This is especially true since we are now in an era that has been described as “late Brezhnev” with a president whose mental competence resembles that of Soviet Union general secretary Leonid Brezhnev in his dotage.

This could be the subject of some great black comedy. It was for the British, aping the Russians. I highly recommend “The Death of Stalin,” if you have not seen it, with such one-liners as, “I can’t remember who is alive and who isn’t.”

But for us Americans that is no joking matter anymore. I still want to know who put those evil, incendiary words in Biden’s all-too-complaisant mouth.

Was it our fellow Nashvillian John Meacham, as Michael Patrick Leahy, on whose local radio show I appear weekly, asserts? So far he is suspect No. one because he has written speeches for Biden before.

But thus far we have no hard evidence he himself wrote this one and, as in the old television show, the real speech writer has not stood up.

I write this as not a complete stranger to the political speechwriting trade. I have done it a couple of times for national politicians with whom I substantially agreed. It was interesting at first, but I wouldn’t recommend it. Putting uncredited words in the mouths of others is not exactly the best—or most honest—way to spend your time.

And wouldn’t we all rather politicians suck it up and write their own speeches? I know it’s difficult and time-consuming, but then we would more likely know what they really think, not what their writers think they should think. And who knows—that way we might get more Churchills and Lincolns, a significant improvement over the present crew.