Reut Cohen: The Farhud and my Family’s Sephardic/Mizrahi Israeli Heritage 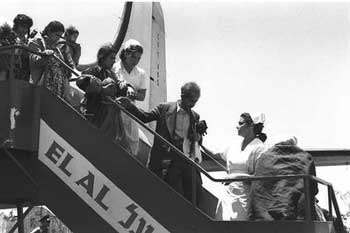 Iraqi Jews arriving in Israel during Operation Nehemiah and Ezra, 1951

We have written about the pogroms and expulsion of Jews from Muslim lands in the Middle East in our interviews with the scholar and author Bat Ye’or, “An Egyptian Jew in Exile,” and Dr. Harold Rhode, “The Savior of Iraqi Jewish Heritage”.

In our June 2014 interview with Dr. Rhode, The Future of the Babylonian Jewish Archives, he commented:

The British had ruled Iraq and in the mid 1930’s, Iraq was given its independence. It had a king but there was a coup led by a man by the name of Rashid Ali who was working with the Nazis, in cahoots with the Mufti of Jerusalem who was living in Baghdad at the time. The Mufti was also working with Hitler. When Rashid Ali’s forces took over in 1941, there was a pogrom (farhood in Arabic) against the Jews. The Jews up until then never really worried. Yes they had been second class citizens because in the Muslim world, neither Jews nor Christians nor any non-Muslims were allowed to rule over Muslims.

In reality, however, the Jews actually ran much of the Iraqi economy at that time, and were involved in many other activities which helped Iraq run relatively smoothly. … After about six days in 1941 when approximately 180 people were killed, a lot of property was destroyed and many Jews were injured – all of a sudden Jews said: “wait a minute, something is wrong here. Maybe we don’t have a future here.” Iraqi Jews weren’t ardent Zionists at the time. But the farhood really shook them to their very foundations. The State of Israel was declared in 1948, i.e., it was the rebirth of the Jewish state which had existed 2000 years ago.

After Israel’s Declaration of Independence, the Arabs – including Iraq – did their utmost to destroy it. Life became almost unbearable for the Jews of Iraq. Especially in Baghdad but in other places in Iraq as well. Kurdistan, however, was a different story. Life was much better for the Jews in Kurdistan which was Northern Iraq.

During our NER interview with University of California- Irvine alumna and former Anteaters for Israel leader, Ms. Reut Rory Cohen, we asked her about her Jewish family background and their experience that brought them to Israel. What follows is an excerpt from the interview during which she describes the experience of members of her Iraqi Jewish family during the Farhud.

Jerry Gordon: What is your Jewish family background?

Reut Cohen:  My family is Sephardic/Mizrahi, with deep ties to Israel. Both of my parents were born in Israel. Their parents are from the wider Middle East and North Africa. In my case, I was born in Israel, but pretty much raised in the United States. To me, the United States and Israel are a bit like a mother and a father. I have profound ties and deep commitment to both countries. At the same time, I am also highly aware of my ancestry, as a Jew of predominately Middle Eastern and North African origin (with some Italian and a bit of Ashkenazi and Ethiopian DNA sprinkled in for good measure).

My father’s family lived in Iraq. They were Jews and lived among other Jews, but identified as Iraqis and were proud to be Iraqis. After all, Jews had such a long presence in Iraq.

It didn’t matter how much they loved their country – many of our loved ones were killed. I like to think I come from a line of strong people. Three members of my father’s family went to fight with the Allies during WWII because they were reading reports about what was happening to fellow Jews in Europe. They never came back.

For the Jews who remained in Iraq, life quickly spiraled out of control as Arab nationalist fervor took hold.

Haj Amin al-Husseini, the Grand Mufti of Jerusalem and one of the initial members of the Muslim Brotherhood, became a Nazi agent after meeting Adolf Eichmann, an architect of the Holocaust, in 1937. With Nazi funds, al-Husseini organized the 1936-39 Arab Revolt in the Palestine Mandate. In 1941, the mufti orchestrated a short-lived, Nazi-backed generals’ coup in Iraq. The coup was followed by the Farhud, a vicious pogrom.

It’s an event that is indelibly imprinted in the consciousness of Iraq’s Jews. The Mufti obtained Adolf Hitler’s assurance in November 1941 that, after dealing with the Jews of Europe, Hitler would treat the Jews of the Middle East similarly. In a two-day period in June 1941, mobs rampaged in Baghdad and other Iraqi cities. At least 150 Jews were killed and more than 2,000 injured; some 900 Jewish homes were destroyed and looted; and hundreds of Jewish-owned shops were robbed and destroyed. My older family members recall witnessing how soldiers pulled small children away from their parents and ripped the arms off young girls to steal their bracelets; pregnant women were raped and their stomachs cut open.

My grandfather rescued his little brother when the violence began. My great-grandfather claimed to be a Muslim when Iraqi troops stormed their home. That was how he saved himself and his daughters, including my grandmother. Many of his neighbors weren’t so lucky. Eventually, when being a Jew was practically criminalized, my father’s family escaped to Israel with only the clothes on their backs – their belongings confiscated.

From 1949-52, more than 130,000 Jews left Iraq for Israel. Over the next couple of decades, almost all of the rest would follow, even though they initially thought they could stay.

One event that served as a catalyst to leave occurred Jan. 27, 1969. Baghdad Radio called upon Iraqis to “come and enjoy the feast” during grisly public hangings of 14 men, 11 of them Jews. Some 500,000 men, women and children danced past the scaffolds where the bodies of the hanged Jews swung; the mob chanted “Death to Israel” and “Death to all traitors.” Baghdad Radio ignored worldwide outrage by declaring: “We hanged spies, but the Jews crucified Christ.”

The last airlift of Iraqi Jews was in 2006. Rabbi Emad Levy, Baghdad’s last rabbi, was last to leave. He described life there as “living in a prison.”

It’s with a heavy heart to see reports of what ethnic minorities are going through in these countries today. From the Christians to the Kurds to the Yazidis. And, let us not forget, peace-loving Muslims as well. May God help them.

It was the same thing in Syria and Algeria – modern Arab states in which I also have roots. In fact, in Syria, it was arguably worse because the persecution spread over a long period of time for those Jews who couldn’t get out. My grandmother did. She paid a Druze with some gold left to her by her deceased mother and came to Israel when it was still part of the Mandate. She was just 16 years old. And she was terrified, but left without recourse. She left the same year that Syria declared independence – 1946.

Ruins of the Central Synagogue in Aleppo, Syria following 1947 pogrom

Attacks against Jews and their property were regular occurrences. They often culminated in bloody pogroms. A pogrom in 1947, for example, left all Aleppo Jewish-owned shops and synagogues in ruins. The Jews were declared “enemies of the government.” Thousands of Jews fled that year, despite the Syrian government’s threats of imprisonment and murder against all those who dared to try to escape. As they escaped, local Muslims and authorities seized Jewish homes and properties. There would be nothing to go back to, though some tried (and failed) to go back in order to sell off assets.

Not everyone was so lucky.

Our family members experienced torture at the hands of Hafez al-Assad’s regime. My mother’s cousins were stuck in Damascus until the 1990s. I was far too young to comprehend it at the time, but today I understand that before they were freed, they had been prisoners in their country. They could be arrested on a whim and tortured. One male relative was tortured for years, accused of crimes against the government.

One female cousin never got out of Damascus. We don’t know what became of her.

And, in Algeria, it was expected that angry Arabs would take their frustrations out on Algerian Jews. There is a common thread here. North African Jewry also experienced concentration camps during WWII. In Libya, at the time an Italian colony, thousands of Jews experienced labor camps and concentration camps. Close to 600 died in these camps from hunger and disease. A special concentration camp for Jews had been established in Vichy-controlled Morocco. The Jews of Algeria were French citizens at the time, but were stripped of their rights, required to wear a mark identifying their religion, and subjected to admission quotas, even in primary schools. In Morocco, anti-Jewish laws were less rigorously enforced. However, Jews had civil rights but were not citizens of France. When the German army entered Tunisia together with a SS unit, they were tasked with applying anti-Jewish policy. Tunisia’s Jews were saved because in early 1943, military developments forced the Germans to retreat.

Jews of North Africa were far luckier than those in Europe, but the end goal was identical – to annihilate the Jewish people.

My family is indigenous to the Middle East. They are from communities that struggled. Many immigrated to a new country, expecting a land of milk and honey, but finding a miserably poor, new country created from the spoils of the Turkish Empire. Many of these people lived in transit camps for years. They helped to build a country that was poor and barely habitable. They were refugees with a plight that has gone largely unnoticed. But don’t think for a minute that they didn’t talk about what they went through. We just have to listen to them – especially now, when time is running out and so many within my grandparents’ generation are slowly passing away.

Thank you, Jerry, for taking an interest in this subject. It’s dear to my heart, especially now that all of my grandparents have passed away (prematurely). I promise, for their memories, never to shy away from sharing their experiences. It’s what they would have wanted.