Russia falls back. Towards what? 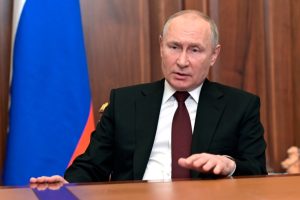 One can spend the entire day, and then some, reading the reporting and the analysis of the Ukraine situation. Needless to say, Putin’s speech, and the potential consequences of his fateful decision to recognize the independence of the predominantly Russian-speaking breakaway regions of Ukraine are momentous enough, and certainly deserve our attention. Given that Russia is a major military power (and a major supplier of much-needed energy to boot), this move put the world on the brink. What more can be said?

Not much indeed; yet much can be said about Putin’s focus on, and his interpretation of history by which he justified his decision. History can be interpreted in multiple ways, and it would serve no useful purpose to yet again rehash the story of the Russian-Ukraine unification and break-up. What I find much more fascinating is Putin’s notion that Russia is, somehow, a counterbalance and natural adversary of the West, rather than the historical part of it.

Sure enough, what we now call Russia was the West’s bitter enemy during the Cold war — but the Cold war expressed antagonism not between Russia and the West, but between Communism and freedom. Now that Russia is no longer Communist, there is no reason to continue this antagonism. It is residual, not natural. And in fact, we were swiftly moving away from it: since the fall of the Soviet Union, the West has again become the playground of the wealthy Russian elites — exactly as it was in the days of the Tsars.

Back then, Russia’ rich and famous spent their lives in Germany, France, and Italy as much as they did in the home country, if not more. Aristocratic offspring was taught by foreign (usually French) governors; the elites were multilingual, their native language being usually French. If literature is the soul of the nation, than much of the Russian soul — Gogol, Turgenev, Tolstoy — resided in Western Europe for years. This was a completely natural choice, made without compulsion. Of course, there were also those who had no choice but to live abroad — the political exiles, or the aristocratic young women who wanted to get university education, and so attended Swiss, French, and German universities (Russian institutions of higher learning did not admit women. The pride of Russian mathematics, the brilliant Sofia Kovalevskaya had to study and work abroad).

So if we are to go back in history and talk of mutual integration of nations (as Putin spoke of Ukrainians and Russians, of the historical naturalness of their unity and the historical unnaturalness of their separation caused by Ukrainians moving towards the West), one should be reminded of the fact that the Russian separation from, and antagonism towards the West which Putin himself sees as natural, is in fact completely contrary to history. Yes, a gap was created by Communism — but it was healing well after the fall of the Soviet Union, when people could again travel, removing the artificial border between Russia and the West — the Iron curtain, physical and cultural.That border is being erected again — not by Communism, but by chauvinism.

What entity which Putin tries to restore in the geographical borders of the former Soviet Union, or even of the Russian empire would, if separated from the West, become a mere body without a soul. Being incorporated into a single state is no prerequisite for mutually beneficial trade, travel, or, for that matter, love. Sovereign nations can, and do, happily coexist together. Hugging Ukraine so close as to stifle it in the embrace, or keeping the West at arm’s length is not at all conducive to good life — of the Russians, of the Ukrainians, or of the West Europeans. Replacing Soviet rulers’ horror that evil imperialists are poised to deprive Russians of the most holy thing there is in the world — of Communism, with the fear that the West will contaminate with its moral rot the Holy Rus (which is the fear that seems to animate Putin), will not return Russia to the days of the Empire — but rather, to its Soviet days. At its imperial height, which Putin apparently aims to restore, Russia was an integral part of the civilized world, now known as “the West,” not something separate from it, let alone opposed to it. Separating Russia from the West will not help his stated goal of restoring Russia’s old glory — real or imagined. If anything, it will cross that purpose.

As to the realpolitik component of what we witness, perhaps Machiavelli is still a good guide. In his classic The Prince, he has this excellent advice for a ruler: never behave in a way that would cause you to be hated. No fortresses will protect you once you become odious. The Soviet Union was universally hated — not just externally, but internally too; it was a place of misery. That’s what may happen to Russia yet again if it morphs again into an ideology-driven state akin to the Soviet Union with its iron curtain, rather than to the Imperial Russia that was completely integral with the West, sharing with it its the wider culture and economy, even if the Tsar could not allow the West’s political liberalism, for fear of losing his absolute power.

Expansion of borders that results in the loss of good will, in suspicion, fear, and hate will be a net loss, no matter the size and the strategic location of the territory gained. Overwhelming force can turn one into a slave — but never into a friend. And slaves are very resentful. The solution to the problem of unity of Russia and Ukraine (even if there is such a problem) is perhaps indeed rooted in history: Ukraine and Russia both belong in the West — and this is where they can find mutual, friendly unity.