Several people were wounded Wednesday in what French officials described as a “bomb attack” targeting a World War I commemoration ceremony attended by European diplomats at a non-Muslim cemetery in Jeddah, Saudi Arabia.

France’s Foreign Ministry said the attack had taken place at a ceremony marking the end of World War I and that several people had been wounded as a result of an explosive device.

“The annual ceremony commemorating the end of World War I at the non-Muslim cemetery in Jeddah, attended by several consulates, including that of France, was the target of an IED [improvised explosive device] attack this morning, which injured several people,” the ministry said in a statement.

The ministry called on Saudi authorities “to shed as much light as they can on this attack, and to identify and hunt down the perpetrators”.

A Greek government official said four people were “slightly injured” in the blast, including a Greek national. The BBC understands one British person suffered minor injuries.

The government of Mecca province described the attack on the ceremony as “cowardly” and said security forces had launched an investigation.

“This morning, at the Jeddah Cemetery, a ceremony commemorating the end of World War I was the target of an improvised explosive device attack,” said a joint statement issued by the French, Greek, Italian, British and American embassies in Riyadh. Such attacks on innocent people are shameful and entirely without justification,” it added.

“We wish those who were injured a prompt recovery, and thank the brave Saudi first responders who assisted those at the scene. We pledge our support to the Saudi authorities as they investigate this attack and prosecute its perpetrators.”

A Saudi-based French journalist, Clarence Rodriguez, tweeted photographs showing the aftermath of the bombing, including one appearing to show an injured person receiving treatment. 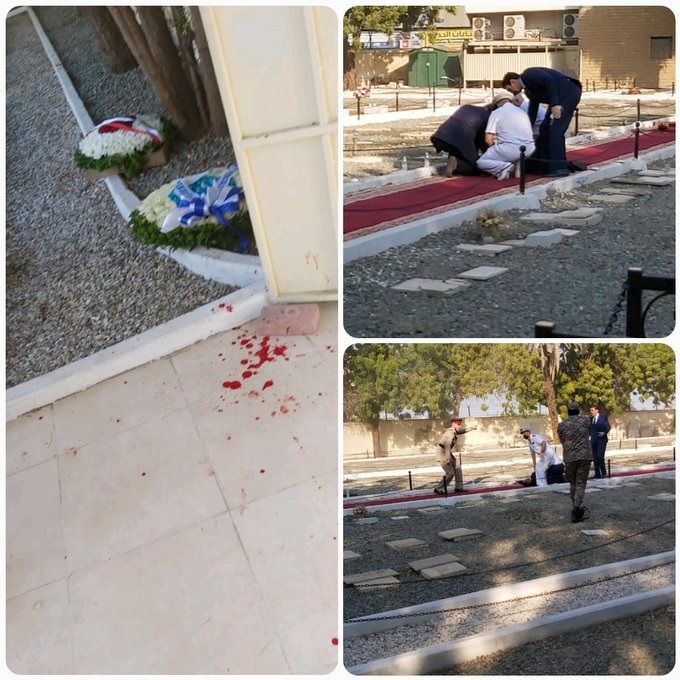 “Attempted attack this morning at the non-Muslim cemetery in Jeddah. During the #11November ceremony. In the presence of the consuls-general of France, [Ireland], [Britain]… and French expatriates,” she wrote.  “There are wounded… [13] days after the knife attack at the consulate, France targeted once again!?”