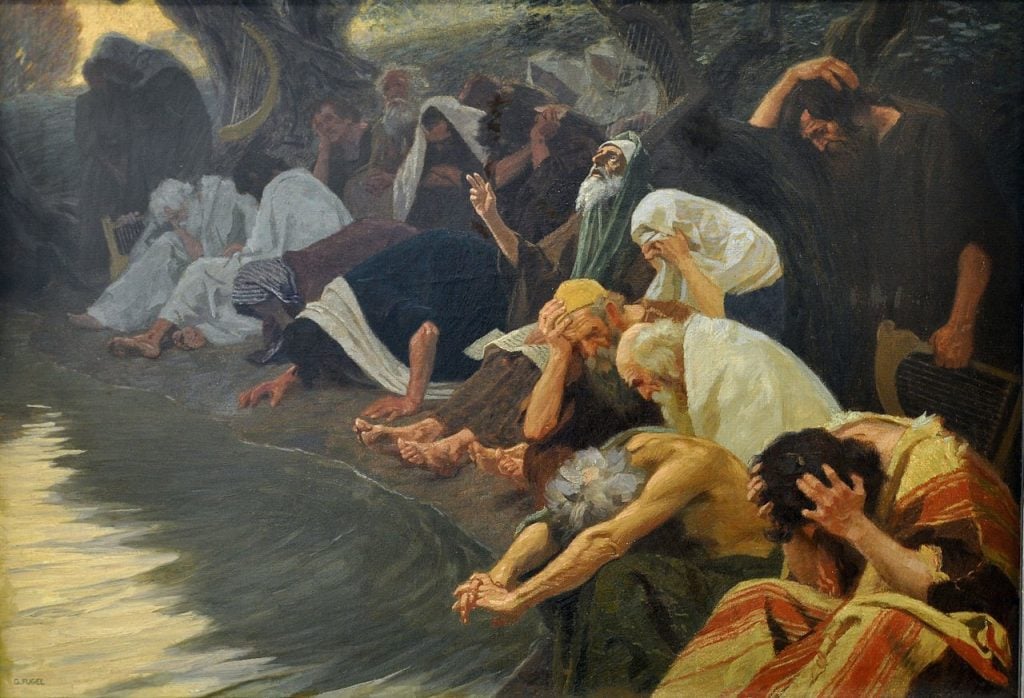 Painting is by Gebhart Fugel depicting us weeping in Babylon, remembering Jerusalem.

This parasha is about many things: about Sinai, always; and about divine commandments such as not cheating your neighbor, supporting the impoverished, opposing permanent slavery, not “crushing” your slaves or your workers. But most of all, it is about the importance of honoring our land, and understanding that this land belongs to God, not to us. It is a gift which we must keep safe and allow to rest. Our ownership is as temporary as are our mortal lives—and yet, nevertheless, how we cling to it, for it it our home on earth which we share with our people. If we must leave, we become “strangers in a strange land,” wanderers, refugees, in distant lands where we are neither known nor cherished. This has happened to our people many times.

As Jews, we have been moving east of Eden ever since we were exiled. Avraham left his home; Rivka did too; as did Ya’akov, not once, but twice. His son Yosef also did. Then all the Jews left Egypt…and we left Jerusalem, not once, not twice, but many times.

Last night I happened to watch Kenneth Branagh’s extraordinary new film “Belfast.” Despite the violent civil wars in North Belfast in 1969, fomented by Protestants against Catholics, we see how one dutiful wife, mother, and daughter-in-law still does not want to leave—not even when her street is overrun by armed men, torching homes and shooting people down. Tearfully, powerfully, she still clings to her home—until, wrenchingly, she realizes that must leave in order to save her family’s lives.

PrevTerrifying moment bow and arrow killer begins rampage that killed five by firing at shoppers in Norwegian supermarket is revealed as he pleads guilty to murder
Margaret Thatcher: Iron Lady or Grocer’s Daughter?Next