From the Daily Mail. Interestingly the only English language reports I can find from Norwegian newspapers don’t mention Espen Andersen Brathen’s conversion to Islamic faith, but both The Local and  Norway Today do emphasis his potential ‘mental health’ problems. The Local also emphasises his Danish nationality.

Espen Andersen Bråthen, 38, went on trial yesterday for the murder of five people and attempted murder of 11 more on October 13, 2021.

The Muslim convert, who was listed by Norwegian security services as a person of concern as early as 2015, hacked his victims to death with a hunting knife after having unleashed a torrent of arrows at innocent bystanders in a Co-Op Extra supermarket. 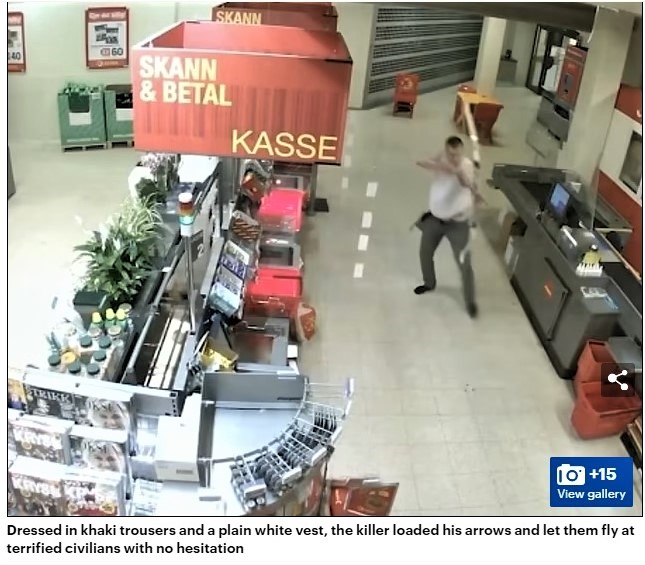 CCTV footage, released by police as Brathen’s trial began, showed how the killer strode into the store brandishing a bow with a quiver of deadly arrows and a huge hunting knife sheathed on his belt.

The 38-year-old pleaded guilty before a judge yesterday morning as the court heard how he stalked the streets of Kongsberg with dozens of arrows before stabbing five people aged 52-78, including four women, to death.

Bråthen, whose lawyers insist is insane and should be sentenced to compulsory mental health care in a psychiatric facility rather than a prison, told the court he thought he was going blind and wanted to kill people while he could see ‘for a better life’.  ‘I got the idea that in order to be born again, in a good place, I had to kill. I thought, now I can go out and kill before I go blind,’ the killer told the court. Not the usual jihad desire for 72 virgins and nonstop raisins one must admit.

Bråthen, described as an ‘unstable loner’ by court documents and neighbours, had a long criminal history and said he had converted to Islam – though police dispute this and say he is mentally ill.

The PST – Norway’s equivalent of MI5 – had contacted Bråthen in 2015, more than six years before he launched his lethal attack. Local police then conducted a ‘concern’ interview with Bråthen in December 2017, two days after he posted a vide online talking about his conversion to Islam.

PST’s evaluation of him at the time was that ‘he was not motivated by religion or ideology but was seriously mentally ill’,

One man, who reported Brathen to police over the 2017 YouTube video in which he spoke of converting to Islam, said he knew immediately after hearing news of the attack who the perpetrator would be.

Meanwhile Oussama Tlili, imam of the mosque in Kongsberg where Brathen lived and carried out his attack, confirmed that he had visited three times about four or five years ago but ‘seemed to know nothing about Islam.’

in 2017, Brathen’s one remaining friend broke ties with him when he spotted the YouTube video in which he spoke of converting to Islam.

n the video, Brathen describes himself as ‘a messenger’ who ‘comes with a warning’ before asking viewers ‘is this what you want?’ and proclaiming: ‘Bear witness that I am a Muslim’.

The friend reported Brathen to police, describing him to officers as a ‘ticking time bomb’ and warning them he was potentially dangerous. . .He told TV2 that Brathen was ‘confused’ when it came to ideology and that it was ‘coincidental’ that he chose Islam.

He has been charged with the murder of five people, eleven attempted murders, and 13 cases of making serious threats. He is also charged with several other offenses, including throwing a knife at three police officers. There are a total of 31 victims in the case.

The trial is scheduled to last until June 17, with a verdict expected in the following weeks.