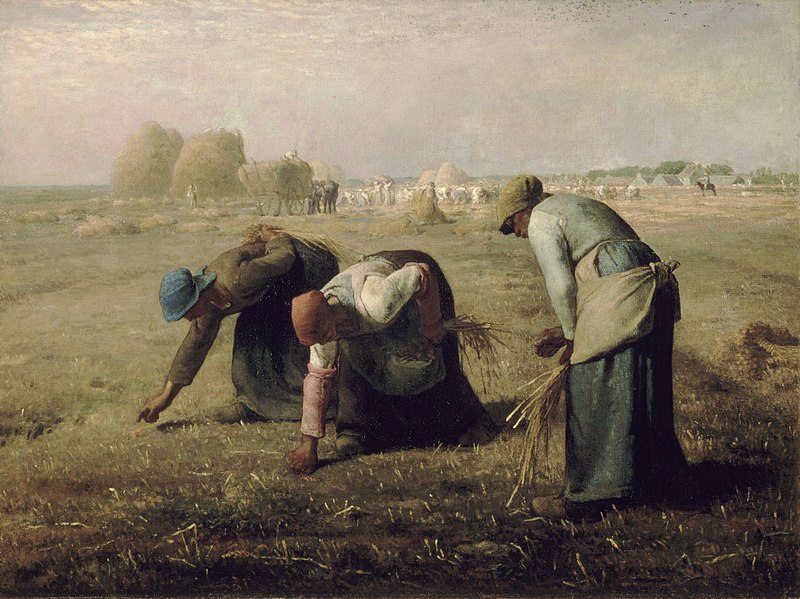 The Gleaners by Jean-François Millet

While I wrestle with this parasha’s concept of blemishes, and the punishments of burning and stoning, I rather love the concept of the gleanings. “When you reap the harvest of your land, you shall not cut completely the corner of the field when you reap. You shall not gather the gleaning of your harvest. You shall leave them for the poor and the proselyte/convert. I am Hashem, your God.(23:22).

Reverberations of a future Ruth and Boaz are here, and the possibility of Messianic redemption is clearly based on anonymous charity, kindness to the poor, and to the convert. The gleaner may or may not know whose field it is; the owner may never meet the gleaner. In any event, the sustenance all comes from God.

Varda herself  is on camera and, although she is “not poor,” and has enough to eat, she recognizes that she is engaged “in another kind of gleaning, which is artistic gleaning. You pick ideas, you pick images, you pick emotions from other people, and then you make it into a film.”

Ah, aren’t we Jews champion gleaners, picking up something left just for us by Yehuda Ha Nasi, Rashi, Rambam, or Ramban, even as we partake in secular knowledge too?

Truly, as they say: Turn it, turn it, everything is in it.