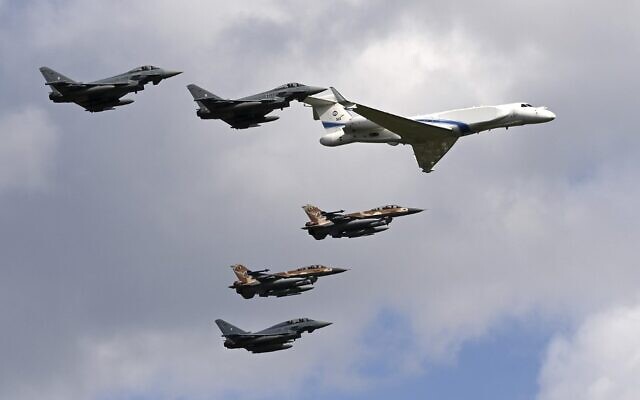 How many historic moments can occur in one week to one country? Dayenu, it would have been sufficient if only one had occurred. But improbably, lightning struck twice and two have happened to the State of Israel in mid-August 2020. During the honeymoon period of this week, awaiting full consummation, of the accord between Israel and the United Arab Emirates, and while the City Hall in Tel Aviv is lit up with the flag of the UAE, there is a second historic moment. The Israeli Air Force, IDF, for the first time, is flying side by side with the German Luftwaffe in joint two week exercises over German skies.

The commander of the German air force General Ingo Gerhartz, remarked, on behalf of his force, “it is an honor to welcome the Israeli air force entering German air space for the first time in history.” In fact, the IAF had already entered that space and performed flights over former Nazi concentration camps, but this is the first time it has done so accompanied by German flyers. It was a historic moment that the country, now with a 82 million population and fifteen times larger, that had persecuted Jews in the Nazi era, was welcoming the country with 9 million population, 75% of whom are Jews.

The historic moment was August 18, 2020, when Israeli F16s, and other planes, flew with Eurofighter jets of the Luftwaffe over the city of Dachau twelve miles from Munich and the nearby Fuerstenfeldbruck air base. The symbolism of the occasion is dramatic. Dachau is the camp where 41,000 Jews were murdered, and Fuerstenfeldbruck was the site of the massacre of Israeli athletes on September 5-6, 1972.

Dachau, built in 1933 and opened by Heinrich Himmler, was the first Nazi concentration camp and the model for all SS Nazi camps, and operated until it was liberated by U.S. forces on April 29, 1945. The U.S. then used it for a time as an internment camp, and it was the site of the Dachau trials between November 1945 and August 1948 . The jurisdiction of the trials by the U.S. related to all war criminals caught in the U.S. zones in Germany and Austria: the most significant case was Martin Weiss, commandant of the camp who was responsible for the initial construction and use of gas chambers. Surprisingly acquitted was Otto Skorzeny, commander of the SS panzer brigade during the Battle of the Bulge.

The Fuerstenfeldbruck air base was the final place of a massacre. On September 5, 1972 eight Palestinian terrorists attacked the headquarters of the Israeli team at the Olympic village in Munich, killing two Israelis and taking nine others hostage. The group, Black September and some operatives of the PLO, demanded the release of the more than 200 Palestinians in Israeli jails. An ensuing battle took place at the air base during which the nine hostages were murdered and five Palestinians killed. After the event, Israel launched “Wrath of God,” a covert operation with Mossad, led by Michael Harari, searching for and assassinating those connected with the massacre.

The flyovers by Israelis and Germans on August 18 , Blue Wings 2020, over Munich and the air base are intended to honor the victims of the massacre, and to illustrate the friendship between the two  countries. This event is the first ever Israeli exercise in Germany, flying sorties with the Luftwaffe. It is historic in a double sense; one is the arrival on German soil of Israeli planes, six F-16 fighter jets, two Gulfstream command and control planes (Nachshon- Eitam) and two  Boeing (Re’em) 707 planes; the second factor is that for the first time the Luftwaffe flew side by side with the IAF.

The exercises of the two air forces will not only give the IDF the opportunity to practice on unfamiliar surroundings and in a variety of scenarios but also together with the Luftwaffe to simulate dog fights,  surface  to air  missile threats and battles, and operations  behind enemy lines.   It is the only training mission the IDF is conducting abroad due to the coronavirus epidemic.

The head of the Luftwaffe, General Gerhartz, called the joint exercises a sign of “our friendship today,” and added that Germany has an enduring responsibility to fight antisemitism. After a period of some coolness in Israel-German relations, that friendship is more evident on an official level. This is the consequence of a number of issues: the feeling especially by some young Germans of collective responsibility for perpetrating the Holocaust; the collapse of the “Arab spring,” the hoped for Arab progressive changes; the increase in Islamic terror in Germany and Western European countries; immigration controversies; and the increasing aggressiveness and fear of Iran.

Germany has acted in various ways to confront the persistence of discrimination against Jews, as well as hostility by some parties to Israel. Chancellor Angelica Merkel in a speech in the Knesset on March 18, 2006 spoke of Germany’s shame for the Holocaust, “I bow my head   before the survivors, I bow my head in tribute to the fact that you were able to survive.” She also expressed concern about Iran’s nuclear ambitions.  Germany, which is Israel’s largest trading partner in Europe, has used security personnel to protect Jewish communities in the country. Though critical of some of Prime Minister Benjamin Netanyahu’s polices, Merkel declared that the Palestinians  should accept Israel as a Jewish state in any peace settlement. She agreed with the U.S. on countries moving their embassies to Jerusalem.

Official action has taken various forms. As antisemitism was increasing in Germany, in May 2018 the diplomat Felix Klein was appointed Commissioner for antisemitism. The Bundestag, in a cross-party alliance in May 2019, was the first parliament to call the BDS movement antisemitic, and to call for the ending of all funding for those who actively support the movement.  Germany has been critical of the Hezbollah and its hostilities against Israel. On July 1, 2020 German defense minister Annegret Kampf ordered the dissolution of part of the elite KSK command force, (special forces command) part of the German army since 1996. The individuals in this group had become partly independent of the chain of military command, and some exhibited pro-Nazi sympathies, possessed Nazi memorabilia, and performed the banned Nazi salute. There is collaboration between the two countries on military and intelligence matters, and on nuclear missile warning systems. Th Luftwaffe took part in joint exercises   in the Negev desert in 2019.

By coincidence on the same day , August18, as the aerial exercises, the Jewish museum in Berlin, designed by  Daniel Libeskind,  opened a new  permanent   exhibition presenting Jewish life, culture, and religion in Germany, spanning historical  eras and focusing on a number of topics: manuscripts from  a Genizah;  drawings from the Theresienstadt concentration camp ghetto; the acts of violence against  Jewish people, institutions and businesses;  looting of property; honoring some of the 12,000 German Jews who fell in World War I; and above all exhibiting the Torah. The museum, the largest museum in Europe, has a zinc façade, and is in itself according to Libeskind, a recounting  of German Jewish  history.  This is apparent by the design of underground axes, zigzag and straight lines, and concrete “voids,” empty spaces that cut through the building from the basement to the roof, symbolic of the physical emptiness resulting from the expulsion,   destruction, and annihilation of Jewish life in the Holocaust .

It is disconcerting that antisemitism is still alive in Germany, as in other European countries.       In 2019 there were over 2,000 attacks recorded on Jewish people or institutions.  One took place at the synagogue in Halle which a neo-Nazi tried to storm on October 9, 2019. Even more regrettable, peaceful protests in 2020 against German government measures to control the spread of Covid-19 have been misused for expressions of antisemitism or support of neo-Nazi ideology  with banners alleging antisemitic conspiracy theories.

It is therefore even more important to appreciate the milestone in history with the bilateral training exercises in German skies. It is an important reminder of responsibility to fight the cancer of antisemitism.