An exclusive from the Daily Mail

The RE teacher suspended over a cartoon of the Prophet Muhammad is reported to have ‘defended his right to freedom of speech’ in a heated telephone call with the father of a Muslim pupil at Batley Grammar School, Mail Online can reveal.

The ‘burly Yorkshire lad’ in his 20s, who has not been named, is also disclosed as saying ‘British values allowed him to present a cartoon of the Prophet Muhammad to his class of year nine students as part of their course work’.

The suspended teacher, who allegedly showed a caricature widely reported as taken from the French satirical newspaper Charlie Hebdo, telephoned the irate father after he had called the school and left a message to speak with him.

A petition started by students of the RE teacher has also passed 35,000 signatures today after police whisked him away for his own safety.

Meanwhile, a school governor is backing calls for the teacher to be re-instated, and is said to feel that the teacher is being ‘unfairly blamed’.

The Muslim parent demanded to speak to the teacher after his year 9 son returned from school and reported the matter to him.

When the teacher returned the call he told the father that he had warned his pupils that some would find it offensive, but his aim was to pose a question to his class. He believed he was ‘right’ to show the cartoon which has offended Muslims across the world. He wanted to discuss whether the cartoonist was to blame or the terrorists who had committed murder over it in France after the satirical magazine Charlie Hebdo had published it.

In a group Whatsapp message, shared among Islamic parents and protesters who have demonstrated outside the school and seen by Mail Online, the angry father said: ‘He should have known better. . . He was not apologetic and was arrogant in his response that what he did was right.”

A protester speaking ‘on behalf of the Muslim community’ read out a statement outside of the school on Friday, in which he said: ‘The teachers have breached the position of trust and failed their duty of safeguarding, and this issue must be addressed as a matter of urgency. We do not accept that the school has taken this issue seriously, given that it’s taken them four days to merely suspend only one of the teachers involved.’ 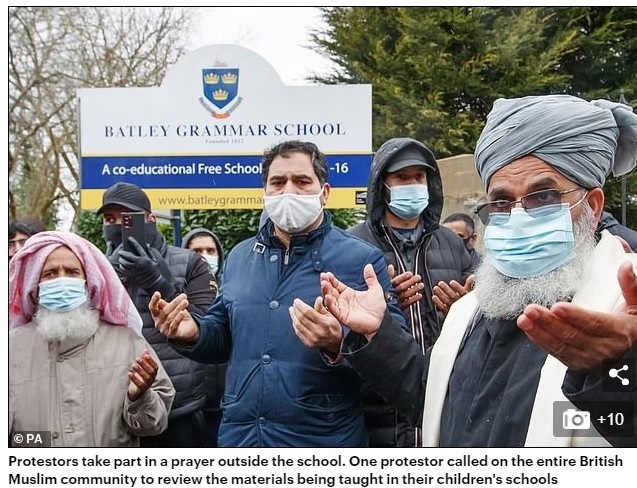 He called on the entire British Muslim community to review the materials being taught in their children’s schools.

A source who is related to one of the school’s governors told Mail Online: ‘Intimidation all round is the feeling why few people are speaking out on the teacher’s behalf and asking not to be identified.