Not an accident then. Independently and 4000 miles apart but thinking alike, Rebecca and I tried to be fair and not jump to conclusions. However I think we can take the word of the Swedish Prime Minister. From the Swedish edition of The Local

Swedish Prime Minister Stefan Löfven says that Sweden ‘has been attacked’ after a truck drove into a crowd on one of Stockholm’s main shopping streets, injuring several people.

A truck drove into a crowd of people on the busy Stockholm shopping street Drottninggatan near Klarabergsgatan just before 15:00 on Friday. Several people have been injured and there have also been fatalities, police have confirmed, but they have not released details on the number of people.

Police also said there are reports of shots being fired in the proximity of the Åhlens city department store but that those reports have not been confirmed.

There are no confirmed arrests. Police had as of 18:00 not traced the driver of the truck. Police have released CCTV images of a man they would like to trace “in connection with the suspected terror attack in Stockholm”. (He’s a dark young chap with a little beard.)

Swedish brewery company Spendrups, which owns the truck, said it had been stolen earlier in the day. (cf Berlin) 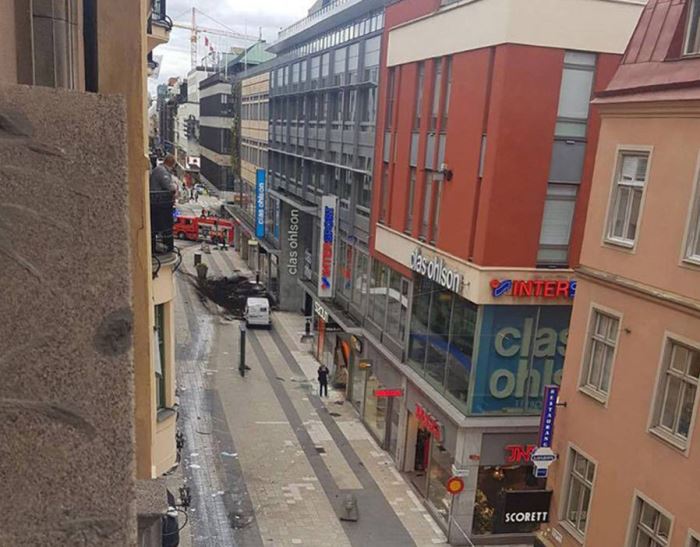 The city’s subway system has been shut down, and Stockholm’s central railway station has been evacuated.

Swedish security police Säpo say that a “large number of people are injured”, and that they are now assisting the police in an investigation. “Intensive intelligence work is being conducted in order to identify the person or persons behind the attack,” they add.

The truck was rammed into a crowd just yards from the scene of a 2010 suicide bombing that left the perpetrator dead in the middle of the Christmas shopping rush.

Sweden’s King Carl XVI Gustaf has released a statement about the incident.

“I and the entire royal family have sadly been informed about this afternoon’s attack in Stockholm. The background to and extent of the incident is not yet know. We are following developments but our thoughts already go to those affected and their families,” the statement reads.

He said it was “obvious” it was not an accident. He said: “I was sitting at the restaurant 150 meters from the scene. Suddenly people were screaming, they were shocked. People were walking to do their Friday shopping, then I saw a dead dog and I saw some dead people lying on the street.

He said it was clear that the crash was “intentional” and said that members of the public had heard shots before the smash. Mr Bjurbo said: “It was quite obvious that it was not an accident, that it was intentional, yes. I spoke to people who said that they were shooting from the lorry and people told me that they heard a lot of shots before the lorry entered the shop Åhlens. There are people telling me that the fire alarm inside the shop Åhlens went off just before the lorry hit the shop, I’m not sure that is conformed fact.”

The vehicle drove into crowds on Drottninggatan (Queen Street) – one of the city’s major pedestrian streets, just before 3pm local time, before crashing into Åhlens Mall.

PrevStockholm: Truck driven into crowd
Do You Speak the Language of Moliere?Next