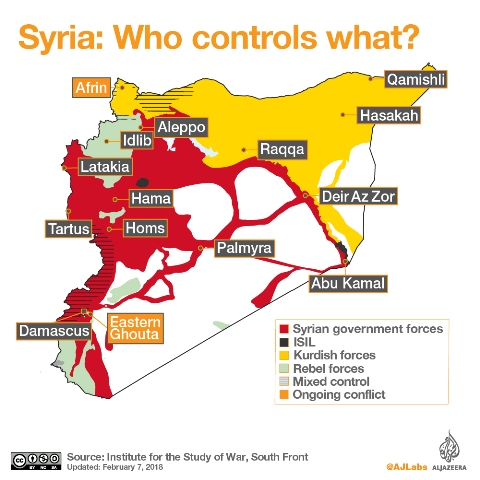 The Syrian battlefield has become complicated. In the post-Islamic war phase we find Iran threatening Israel with extinction with drones and precision missiles, permanent bases with 20,000 Shia mercenaries from Afghanistan, Lebanon, Pakistan, and Iraq. All controlled by Revolutionary Quds Force commander Qassem Soleimani seeking to extinguish the Jewish nation, a US ally.  Then there is US NATO “ally” Turkey headed by Islamist President Erdogan invading the Kurdish enclave of Afrin in Syria’s northwest frontier seeking to destroy Kurdish YPG units backed by Assad regime forces. Turkey’s military force is backed by the misnamed “Free” Syrian Army composed of refitted Al Qaeda and former ISIS fighters. 60 miles to the East of Afrin, at Manbij, Turkey has demanded withdrawal of US forces supporting Kurdish YPG Syrian Democratic Forces (SDF).  US commanders have refused Erdogan’s threat of an “Ottoman slap’.  Further, in Eastern Syria, a combined armored force of Russian mercenaries, Assad and Iranian backed proxies attempted to cross the Euphrates River to seize the oil and gas fields at Deir ez Zor from US coalition backed YPG-led SDF forces, only to be virtually destroyed with hundreds of casualties by US air, artillery and drones.  Unclear are the objectives of Russia, the US and Israel in this multiple dimensional geo-political chess game in Syria with Frenemies, Turkey and Iran.

To try and gain some perspective on these dangerous developments in Syria we convened another in the periodic Northwest Florida Talk Radio 1330amWEBY Middle East Round Table discussion with Shoshana Bryen, senior director of the Washington, DC –based Jewish Policy Center. She was interviewed by WEBY “Your Turn Host, Mike Bates and Jerry Gordon, Senior Editor of The New English Review and frequent co-host of Israel News Talk Radio – Beyond the Matrix.  Listen to the broadcast, here, here, here, and here.

Here is a sampling of questions and responses by Shoshana Bryen.

WEBY : Was there a connection between the Iran drone intrusion into Israeli airspace and the Russian/Iranian and Assad task force attack against US – backed Kurdish Syrian Democratic Forces in Eastern Syria?

Bryen: It was a weekend of “testing” and I don’t think it matters whether it was coordinated or not. Some things were:

The US did a very good job in repelling – you can see that their orders are clear: kill the bastards. The Russians and the Americans downplayed the incident. The Russians didn’t want to be exposed. The Americans didn’t want to embarrass them. The next thing will be to see if the Turks really attack the US-protected Kurds and. Whether the Syrians attack the Turks to protect the Syrians.

WEBY: Israeli PM Netanyahu clashed with Iranian FM Zarif at the Munich Security Conference over Iran’s presence in Syria and its pursuit of nuclear capable missiles on display at the anniversary of the Islamic Revolution.  What are Israel’s options contending with Iran’s threats closing on its borders and from afar?

Bryen: The best would be a continuation of the upheaval inside Iran .First because it might actually topple the government. It’s the accumulation of smaller quakes that eventually causes the big one. Second, if the Iranians have to look over their shoulder at their own people, it is harder to expend resources abroad. Aside from that, Israel has both defensive and offensive options. It allowed the drone to enter Israeli air space; it also had options for destroying it over Syria. Israel has just taken out 60% of Syria’s air defenses; leaving Iran as well as Syria with fewer defenses. There is more of that coming. Russia appears to have known about it

WEBY: What is Putin’s role in the Syrian conflict and his alliance with both Iran and Turkey?

Bryen: Russia is clearly the top dog here – Russia and Iran are in Syria at the invitation of the legitimate government, Assad’s government. Turkey is not – it is an invader and has longstanding poor relations with Syria, not only over the Kurds. As for Russia/ Iran – it is an unsteady relationship at best. Putin would prefer Shiite Muslims to Sunni ones, but not by much. Historic adversaries in the Middle East and Central Asia, they are cooperating on this one, but there is a HUGE snag – Russia always prefers to operate from abroad, in this case by having legitimate military bases in the country but not using those bases to interfere on the ground. Their political control comes from Moscow, reinforced on the ground only if necessary. Iran on the other hand, wants to operate from inside Syria to control its holdings in Iraq and Lebanon as well as Syria. How long their love-affair lasts – well, it’s not a love affair. As for Russia/Turkey again, remember that they’re historical adversaries – including because Sunni Turkey support Sunni separatists in Chechnya and Dagestan and other places. And in this case Turkey is killing Kurds – who are part of the Russian/Syrian plan for the future.

PrevNewcastle grooming gangs were allowed to abuse 700 girls because police blamed the victims, review finds
Our politics is getting silly. Canadians can and must do betterNext