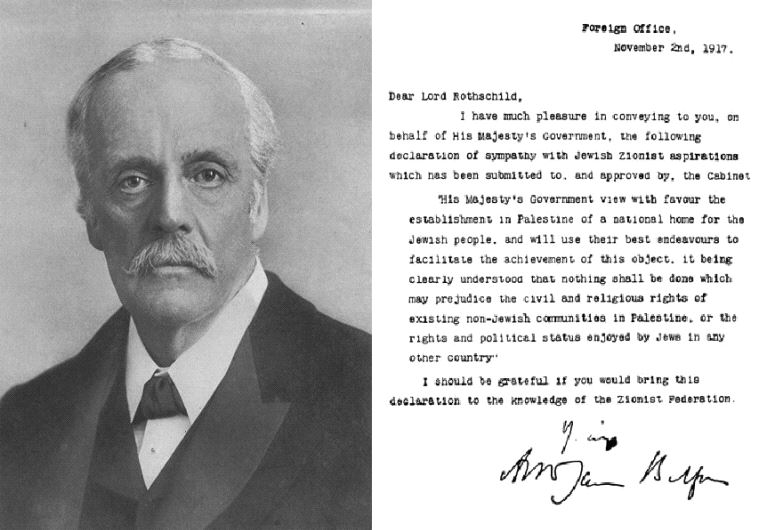 Why can’t the English, a pensive people of philosophical joys, meditation  and contemplation, learn to set a good example by ending left wing antisemism? The question has arisen in vivid form on the 100th anniversary of the Balfour Declation.

The British Government did not create the State of Israel but it did issue the Balfour Declaration on November 2, 1917 which influenced international decisions on the Middle East. The Declaration  was a short letter of 67 words sent by the British Foreign Minister Lord Balfour to Lord Rothschild, then president of the Zionist Federation of Great Britain and Ireland. The letter made public the view that the British Government viewed with favor the establishment in Palestine of a National Home for the Jewish people and would use its best endeavors to facilitate the achievement of this objective.

It was incisive on its essential factor, the return of Jews to Palestine, but also ambiguous and qualified. It was silent about both geographical factors and British policy intentions. It was qualified in stating that nothing should be done which might prejuduce the civil and religious rights of existing non-Jewish communities in Palestine, nor the rights and status of Jews in any other country.

This remarkable statement can be assessed from different points of view. Britain, still then a leading power with international possessions, was long interested in dismembering the Ottoman Empire, ensuring British dominance in the Middle East, and controlling the Suez Canal. Perhaps British leaders  wanted to preempt the Germans from dealing with and using the new increasing Zionist movement.

David LLoyd George who had become prime minister in December 1916 was, like Lord Balfour a devout evangelical, who at school had learned more about the history of Jews than about his own Welsh background, and believed on religious grounds that Jewish return to the Holy Land would fulfill the biblical prophecy of return.

A major factor was the activities and impact of the Zionist leader Chaim Weizmann, a skilled diplomat as well as a scientist who helped the British war effort against Germany. Weizmann, born a Russian Jew from the Pale, convinced Lloyd George there was a common interest between Britain and a Jewish homeland. In this he was helped by the influential journalist, C.P. Scott, editor of the Manchester Guardian, an enlightened liberal, sympathetic to Zionism. Indeed, Scott wrote in 1929 of his conviction that the Zionist  project was valuable not only for the Jewish people but also for other nations as a connecting link between East and West.

Yet, in what might seen as an example of British genteel antisemitism some British leaders thought of the Jewish community as an important influential force in the world that might act on behalf of and rally support for the British  war effort in fight against Germany in World War I.

The Balfour Declaration became binding in international law with the decisions of the San Remo conference and the British Mandate of the League of Nations, and the consequent chain of events. But it has never been accepted by the Arab world though some Arab leaders for a time appeared to abide by the Declaration. A promising step, all too brief, came on January 3, 1919 in London when an agreement, conditionally accepting Balfour, was signed between Weizmann and Emir Faisal ibn Hussein, soon to be king of Syria and then Iraq. Its preamble commented on the racial kinship and ancient bonds between the Arabs and the Jewish people. It agreed to encourage and stimulate immigration of Jews into Palestine on a large scale.

Later, Faisal who had spoken of the necessity for cooperation between the two peoples, wrote that the Arabs, especially “the educated among us,” look with the deepest sympsthy on the Zionist movement which is national and not imperialist, as is the Arab movement. The demands of the Zionists, he thought, were moderate and proper.  Similar approval, if on a lesser level, was expressed in August 1918 by the Ottoman Grand Vizier Talaat Pasha for the establishment of a Jewish religious and national center in Palestine.

One can understand, even expect, that Palestinan leaders would assert that  Balfour was not something to be celebrated, and that Britain bore a great deal of responsibility for the MIddleEast problem. For them, Balfour has promised a land that was not theirs to promise. Then, Mahmoud Abbas, Palestinian president and chairman of the Executive Comittee of the PLO, with some exaggeration held that the Palestinian people was a proud nation with a rich heritage of ancient civilizations. His much more exaggerated  formal statement was that Balfour was the “most horrible crime in the history of mankind.”

Not all British politicians then and now agreed with Balfour, and divisions existed in and between political parties. But, in view of the present antisemitic attitudes of a significant number of Labour Party members, it was worth recalling  that Balfour was supported by some prominent members of the Party, including Arthur Henderson, George Lansbury, and Ramsay Macdonald.

It does not need reiterating that criticism of the State of Israel, even support for BDS, boycoytt of Israel, and emphasis on the rights of Palestinians, is not necessarily motivated by hatred of Jews or antisemitism, but the dividing line is never fully clear. Prime Minister Theresa May warned of using critisim of Israel as a cover for the new and pernicious form of antisemitism which uses criticsm of Israeli actions as a despicable judtification for questioning the very right of Israel to exist.

What is bewildering is the surge of aantisemitism within the Labour party concerning attitude to the State of Israel and to Jews. A few years after Balfour the Bolshevik leader Vladimir Lenin, whose grandfather is said to have been  born Jewish in Odessa, in 1921 recorded a short speech titled “On Pogroms and the persecution of the Jews.” He  reminded his listeners that it is not the Jews who are the workers’ enemies, “it is the capitalists of all the countries, the great majority of Jews are themselves workers…they are our brothers being oppressed by the capitalists.”

The answer to critics was given by May at a dinner in London on November 2, 2017. Britain was proud of its pioneering role in the creation of Israel, and there was absolutly nothing for which to apologise. She expressed pride and respect for Balfour, though recognising that hopes for peaceful coexistence had not been fulfilled. What is significant is that at the dinner honoring Balfour, attended among others by Benjamin Netanyahu, the leader of the Labour Party Jeremy Corbyn did not attend.

Corbyn himself is not regarded as antisemitic but he is the head of the Labour party that contains a significant section that can be described in this way. Allegations of these members are rife: the modern state of Israel was created by the Rothschilds not by God; Jews control Wall Street, Hollywood, the media, TV networks, law courts, international spying, sex trafficking, and the statement that every Jew who died in the Holocaust was a blessing. It is disappointing that training sessions over the last 14 months about antisemitism for 1,200 Labour Party  members have had little effect. Jewish Labour members have been held responsible for a Jewish conspiracy, and control of media.

This brings up once again the controversial question of controlling the social media. The latest example is a Twitter that said with uncomplimentary remarks that Stamford Hill in northeast London was riddled with Jews where indeed the largest number, 20,000 Haredi jews, the largest orthodox community in the UK, live. Twitter refused to remove the post.

The problem seems out of control. Twitter must be held accountable for comments. Social media have as much responsibility for content as broadcasters. They should be treated in the same way.