The Enlightenment has mutated, and this threatens our civilization 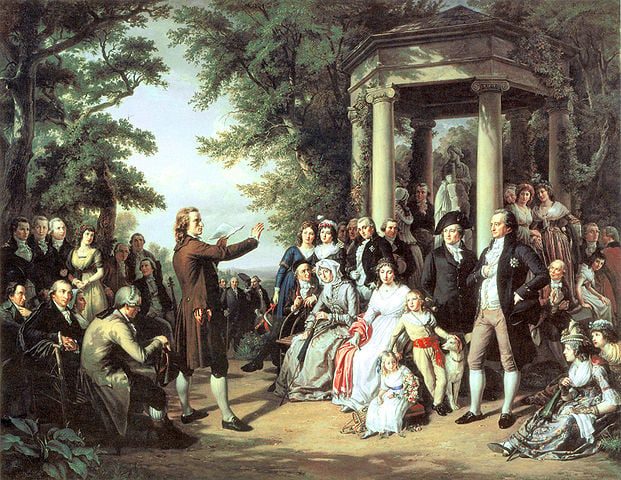 The Weimar Court of the Muses by Theobald von Oer in 1860, 55 years after Schiller‘s death in 1805, this oil painting was produced of a reading of his poems in the park of the Schloss Tiefurt. Among the listeners, to the right, is Goethe

Readers will recall that I concluded last week with a promise to try to develop some thoughts that emerged in that column but which there was not space to complete. After my expression of reservations about severely condemning people for minor errors of conduct, I referred to a wider sociocultural problem of what has become a great schism in our civilization.

The Middle Ages were generally an age of faith, which ended with a combination of the Renaissance, the Reformation and Counter-Reformation, and broadly, the Enlightenment. For a time ecclesiastical and secular authority collaborated, as between Henry VIII and his great chancellor Cardinal Wolsey, and Louis XIII and Cardinal Richelieu, founder of the modern French state and of that continuing monument of the Enlightenment, the French Academy. I made the point that while the Enlightenment did not begin as being atheistic, the concept of reason was quickly subsumed into skepticism, and the Enlightenment has generally evolved over five centuries toward the complete dismissal of religion as contrary to reason.

The schism is that the great majority of people in the West, and certainly in Canada, believe that there is some sort of supernatural spiritual force or intelligence, whether they translate this into religious practice or not, but that the academic communities, the media, and the higher levels of government are all almost entirely in the hands of atheists, and in many cases, aggressive atheists. Recruitment to the clergy in the Roman Catholic and Evangelical Churches are increasing, and attendance at their services is steady or rising, but in the salons of the publicly influential, any reference to religion, other than as an antiquarian superstition, causes anyone who raises the subject to be stared at as if he or she had two heads.

Exceptions are made for the Muslims and Canada’s native people. Parliament has passed a motion praising the civilizing value of Islam and claiming that there is a “rising climate of hate and fear” in Canada, which is nonsense. The Supreme Court has accepted to hear out a 25-year controversy that has been comprehensively addressed by the British Columbia courts, that a ski area development in the Kootenays may banish the spirit of the grizzly bear and, according to a private revelation to a deceased elder of a band of 900 people many years ago, thus prevent the practice of their religion. The truckling to Islam, I believe, apart from cowardice and societal self-hate, is itself a mockery of religion, since there are few religious denominations which, by their rites and texts, atheists are more likely to despise. The motivation for acceptance to hear absurd litigation from First Nations in the country’s highest courts is less contemptible. The First Nations have legitimate grievances, but they will not be addressed in this sort of frivolous and vexatious court action.

Intellectually, the problem is that religion is essentially reasonable and atheism is unreasonable and the consequences of the militancy of contemporary atheism are not only unreasonable but offensive to reason. Few things in our murky lives could be more obvious and indisputable than that there must be some force in the cosmos that causes spiritual insight, authenticated miracles, and is able to grasp the notion of the timeless, the limitless, and the fact that at some point in our past there was some kind of creation.

I am not touting religious practice (though I am a practitioner, having long ago lost faith in the non-existence of God, but respect all even semi-rational religious views, including atheism). It need hardly be said that horrible acts have been committed in the name of religion. That is the problem when mere people interpose themselves between the terrestrial life we all know and the spiritual life which is elusive, personal, largely inexpressible, and the subject of much doubt, some of it informed and intellectually respectable doubt.

Yet, in Marxist parlance, the commanding heights of society have been seized and occupied by militant atheists, with the complicity of the usual sodden camp-following of those who have no convictions and are easily moved by a tide of fashionable unquestioned wisdom, no matter how mindless and unrigorous. The inheritors of the crusade for reason have largely become crusaders for intolerance and for the repudiation of the Judeo-Christian roots of our civilization. This force which inspired Michelangelo and Leonardo da Vinci, and illuminated the works of Shakespeare and even Descartes, much of it subsidized by the Christian Church, is now effectively led by those who despise Christianity as superstitious and shaming bunk.

Any attempts to insert tenets of our Judeo-Christian tradition anywhere in public comment or policy are unctuously rejected as violations of the immaculate separation of church and state, which is in fact the liberty the state accords itself to suppress and ridicule the practice of rendering anything to God, or subtracting anything from entire deference to our pallid inheritors of Caesar. Many religious leaders have facilitated this process by the obtuseness and prurient pettifogging with which they have often attempted to circumscribe the lives of those disposed to take their opinions seriously. The present pope, Francis, has earned the gratitude of his co-religionists by applying the question “Who am I to judge?” to a sexual matter, which has made it much more difficult for the enemies of the Roman Catholic Church to dismiss it as a cabal of septuagenarian celibates and closeted gays that harangues the people of  the world about their sex lives. It perhaps makes the pope’s dalliance with the Latin American left, including the decayed Leninist despotism of the Castros, more excusable.

Hedonism and pagan spectacles, enjoyable as they often are, predominate. We are creating a society in which gestures to morality and the rule of law increasingly have become arbitrary and unjust separations between those mouse-trapped by events and condemned as guilty and even sociopathic, and those who successfully navigate between the shoals of official misconduct, however immoral or amoral or just circumstantially fortunate they may be. As I wrote last week, the problem with atheism apart, from its illogic, is that it incites the inflammation of the human ego. Man becomes perfectible and takes the place of God; knowledge is deemed to be finite and every day we are progressing towards a plenitude of knowledge. And all shortcomings in this dangerously egocentric system are made up by naivete or cynicism, Kerensky or Stalin.

And yet, the great majority of people, even if furtively and intermittently, lift up their eyes to something more inspiriting than our secular rulers and those who entertain us (rarely the same people). In the absence of such an alternative, man rushes to fill the vacuum of the fallible, and relativism fills the moral vacuum. Most people will embrace some variant of a golden rule. But there creeps in, at first tentatively, but soon assertively, the relativistic argument. Yes it is good to treat others as one would wish to be treated. But the alternative, of doing anything to advance one’s interest and being completely unscrupulous, becomes arguable and legitimate, especially for an unusually able person in pursuit of ostensibly desirable goals.

Much of the present leftist deference to Muslims is really implicitly a ridiculing and defaming of all religions, in the guise of exaggerated tolerance

Of course our legislators and judges, like most people, are relatively decent most of the time. In the same measure that we are all sinners, we all also have the potential to do good, and would generally rather do good than not. Of course our society would be resistant to the temptations of extreme evil and wickedness. It is hard to imagine in most Western societies that such an appeal would be accepted, as it once was in the culture of Goethe and Beethoven and in the culture of Tolstoi and Tchaikovsky. But we plod on, over-punishing those who fail insignificantly and excessively rewarding those who game the system by pandering to mass tastes and sensibilities. It is the triumph of the shabbiest placemen, the decayed servitors, the obsequious careerists. It would be very rude, and is unnecessary, to name current local examples, but they abound.

This is what the Enlightenment has become. In its mutated condition it afflicts and threatens our civilization. Much of the present leftist deference to Muslims is really implicitly a ridiculing and defaming of all religions, in the guise of exaggerated tolerance. At some point, there will be a confrontation between falsely righteous and devious atheism and, when it has acceptable evocators and leaders, the majority who are suspicious of the facile trucklers and propagators of a conventional wisdom that is increasingly simplistic, trendy, and in the sense of having no ethical basis, empty. The believers will have to assert themselves calmly and democratically over the nonbelievers.

This is the schism our civilization faces. It will be resolved when the silent majority speaks and the lumpen followership, as such masses do, changes side to the long over-indulgent majority. The elitist sniggering of the self-hating philistines who infest our media and education systems must be moderated by the voice of collective belief and evolved tolerant civilization. We are traduced and betrayed by a largely unwitting fifth column in our midst.