The Extended Parasite: On the Design of the Diversity Bureaucracy 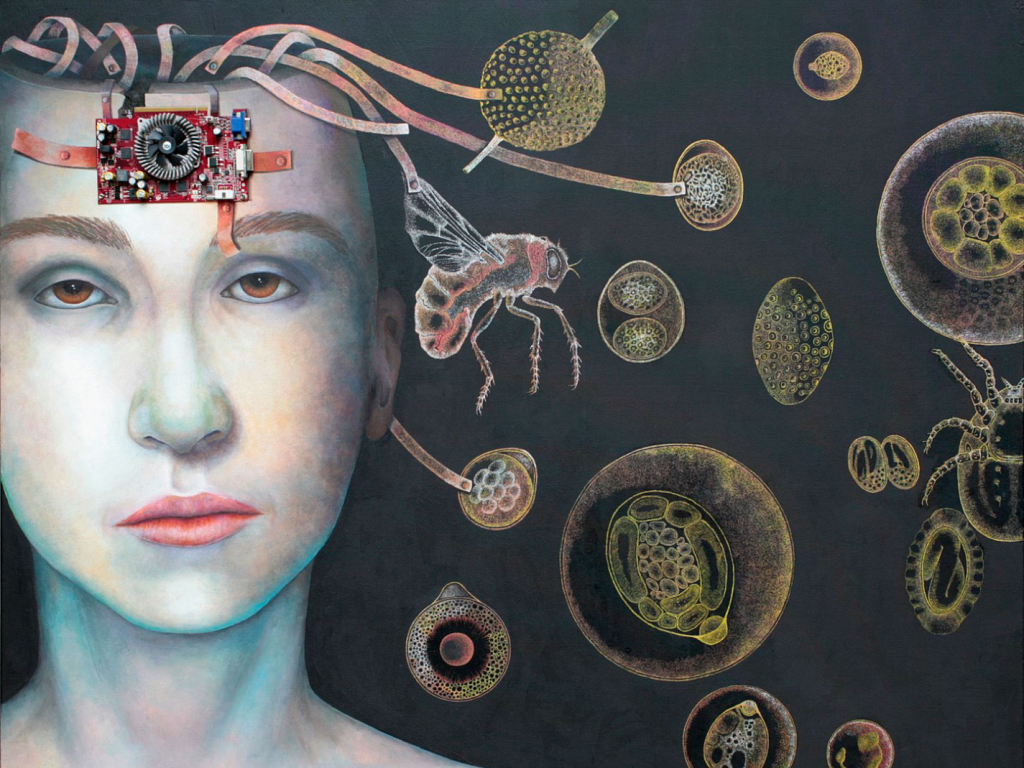 Much has been said about diversity, inclusion, and equity (DIE) ideology—an amalgamation of postmodernism and critical theory—but few scholars, if any, have bothered to study the DIE bureaucratic structure itself.

In The Extended Organism (2000), Dr. J. Scott Turner examined how animals “construct and use structures to harness and control the flow of energy from their environment.” If we seek to excise the DIE ideologues—the “brainworms,” as Turner later analogized them—we should examine the DIE bureaucracy as an extended organism, or better yet, as an extended parasite. We must understand how its structure was intentionally designed to foster blind obedience to authority.

Let us begin by considering the experiments of Dr. Stanley Milgram, a social psychologist who produced groundbreaking research on obedience to authority and conformity to social pressure throughout the 1960s. Milgram’s experiments showed that most people would obey instructions to inflict pain on another person—even up to the point of killing that person—if certain conditions were met.

In The Lucifer Effect (2007) Dr. Philip Zimbardo detailed the lessons we should learn from Milgram’s research to avoid the “traps” laid by malevolent figures in which good people are often caught. The first trap on Zimbardo’s list will likely sound familiar:

1. “Prearranging some form of contractual obligation, verbal or written, to control the individual’s behavior in psuedolegal fashion.”

Consider the rising trend of required “diversity statements.” It is no coincidence that the practice has become a favorite tool of the DIE bureaucracy. Critics of this practice have argued that such statements function as ideological litmus tests, but few have realized the significant psychological ramifications for those who—even begrudgingly—acquiesce to the DIE bureaucracy. Diversity statements certainly operate as litmus tests, but they are also the first step in the extended parasite’s greater function: to harness and control the energy—the obedience—of the DIE ideologue’s environment. Zimbardo’s second trap is likely familiar too:

Leftist movements have long used labels that sound wholesome to mean something else entirely. Words such as “liberal” and “progressive” have reigned over the most illiberal and regressive of social movements—the DIE bureaucracy has recently co-opted the term “antiracism” for similar purposes. To be a genuine antiracist is perhaps the single most meaningful role that one can play in an ethnically heterogenous society like the United States. Unsuspecting people will, naturally, cling to the title, even if that means submitting themselves to illogical policies. Indeed, that is precisely the third trap:

3. “Presenting basic rules to be followed that seem to make sense before their actual use but can then be used arbitrarily … to justify mindless compliance … [S]ystems control people by making their rules vague and changing them as necessary but insisting that “rules are rules” and thus must be followed.”

In the second chapter of How to Be an Antiracist (2019), Ibram X. Kendi defines an “antiracist” as “[o]ne who is expressing the idea that racial groups are equals and none needs developing, and is supporting policy that reduces racial inequity.” The rule seems basic and sensible until it’s actually applied: If one honestly expresses the idea that racial groups are equals and that none needs developing, then one cannot support policies reducing racial inequities, as it negates the very belief one is required to hold and express. If one supports policies reducing racial inequities, then he implicitly confesses his belief that the racial groups in question are not equals.

By Kendi’s own definition, then, no one can actually be an “antiracist.” The only hope one has is to mindlessly comply with the illogical policies of Kendi’s totalitarian bureaucracy. That mindless compliance, of course, is what this policy was designed to generate for the individual parasite’s benefit. The extended parasite’s function, however, is not yet complete, as victims will eventually realize what is happening and rebel against the DIE bureaucracy (and oust the DIE ideologues). The extended parasite then transitions from subverting the minds of its victims through illogical policies to absorbing the victims into its bureaucratic structure by making them accomplices.

Consider, for example, the Grievance Studies affair, initiated in 2017 by Drs. Peter Boghossian, Helen Pluckrose, and James Lindsay. This trio set out to write hoax papers for academic journals covering race, gender, sexuality, and similar topics to expose the corruption of these fields. With no success after a few months, they realized that they had begun “ambitiously and mostly stupidly.” They paused and took a step back to engage with the literature, which led them to better understand what these “grievance scholars” were looking to publish. Their papers began to be accepted, and Lindsay observed that:

You can come up with these really nasty arguments, like: “Let’s put white kids in chains on the floor at school as an educational opportunity.” And if you frame it in terms of overcoming privilege, and you frame their resistance… in terms of ‘oh, they only complain about that because they’re privileged, and they can’t handle it because their privilege made them weak’ then [the paper] is right in.

Lindsay’s observation may be disturbing, but it should not be surprising. An authoritative basis—such as a publication in an “academic” journal—is what the DIE bureaucracy needs to turn its victims into its accomplices. The kids in Lindsay’s example are not the targets. The real targets are the educators and administrators who may disagree with what is being done, but will not resist (and will eventually partake) if the action is disguised as socially positive with an authoritative basis. This process is precisely the fourth trap on Zimbardo’s list:

4. “Altering the semantics of the act, the actor, and the action … replacing unpleasant reality with desirable rhetoric, gilding the frame so that the real picture is disguised.”

These four traps help set the fifth: the diffusion of responsibility. From the very beginning, the extended parasite has worked to diffuse responsibility so that everyone within the ecosystem is guilty, not just the DIE ideologues who built the bureaucracy. Required diversity statements, the meaningful roles given to those who write them, and the illogical policies and harmful actions that are made to appear well-intentioned all help to diffuse responsibility among the victims-turned-accomplices—the appendages of the extended parasite.

The DIE bureaucracy then increases its actions incrementally, trapping its victims ever further. It offers an ideology for victims’ minds to rest upon and makes the exit costs as high as possible, such as the loss of one’s job and professional exile. In doing so, the extended parasite secures its environment and its future. Through even a brief analysis of the DIE bureaucracy’s policies and practices, it is clear that the structure is intentionally designed to foster blind obedience to authority. But another question arises: Why did the extended parasite emerge in our universities? An answer may be found in the political skew of a college campus.

The left wing and the right wing differ not only on policy issues but also on individual personality traits. On the Big Five model, those who rank highly on the personality trait of Openness, and low on the trait of Conscientiousness, are often on the left wing, where the reverse is true for the right wing. The wings also differ on sub-traits. In 2010, researchers concluded that the trait of Agreeableness can be divided into two distinct sub-traits: politeness and compassion. People associated with traditionalism (right wing) tend to be more polite, whereas people associated with egalitarianism (left wing) tend to be more compassionate.

If the political wings exist in approximate balance, the psychic energy of the environment, so to speak, rests at relative equilibrium. The academic ecosystem, however, increasingly favors the left wing. Researchers Mitchell Langbert and Sean Stevens concluded in 2020 that the political skew between Democrats and Republicans on college campuses has become dramatic. The field of economics had the least political skew, where Republican professors are outnumbered only 3 to 1. The Midwest had the smallest difference regionally, where Republicans are outnumbered only 5 to 1. The academic ecosystem has become too left-leaning, and hence too compassionate.

This disequilibrium is very dangerous. Research has shown that (even when one controls for demographic and socioeconomic variables typical of victim status) Dark Triad personalities— Machiavels, Narcissists, and Psychopaths—signal virtue and victimhood status more often. They weaponize the compassionate nature of the left wing against the left wing itself, manipulating and ultimately subduing it. The absence of right-wing intellectuals in our universities and the declining enrollment rates of males—who tend to be more conservative temperamentally if not politically—have created a sort of auto-immune disorder on an institutional level.

In a very real sense, the academic environment has become ideal for parasitic life. These DIE ideologues have entered an ecosystem with no natural predators, the conservatives who would immediately see the danger, and the ecosystem is ripe with their prey, the liberals whose personalities make them inherently unsuspecting. These social parasites are free to roam, especially in our universities, and have begun to build their bureaucratic structures. The design of these structures—the policies and practices used—makes it clear that the DIE bureaucracy is an extended parasite unto itself. Whether or not this structure will last for long remains to be seen.

Those knowledgeable of psychopathologies are liable to be skeptical (and understandably so) that the Dark Triads possess the collective ability to survive over the long term. Dark Triads are usually unsuccessful, as their nature will eventually betray their interpersonal relationships, their reputations, and, ultimately, their future selves, forcing them to flee. Will this pattern hold for the extended parasite that is the DIE bureaucracy? The answer is most likely yes, as we see enrollment numbers continue to fall and employers—in both public and private sectors—restructuring educational requirements to avoid the infested universities.

To be duly cautious, however, let us assume that the answer is no, and that the extended parasite will, in fact, thrive. There are reasons to be concerned that this may actually be the case. We see corporations flagrantly violate well-established civil rights law, as the benefits of being “woke” outweigh the risk of lawsuits or complaints to federal authorities. We also see the federal authorities themselves promote “woke” policies, making any resistance that much more difficult. If the extended parasite will not wither on its own, then confrontation will be necessary, and we should assume, out of an abundance of caution, that it already is.

There are many policy-based pesticides that we may deploy against the DIE bureaucracy, but sunlight is a solid disinfectant. Educating others about these psychological “traps” will be useful, as will thorough explanations of what DIE ideology actually is and why it proves so harmful. Long-term solutions will require the return of right-wing intellectuals to our universities in order to bring balance to the ecosystem and to defend the academy—a nexus of the nation’s culture—from psychopathic subversion. No matter what treatment we use, recognize that each has a common denominator: the presence of courageous voices, and the necessity that they be heard.