The Return of the International Brigade 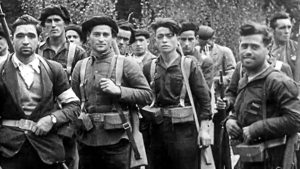 Volunteers in the Spanish Civil War

History does not repeat itself, though historians do, and the world is not the location of Groundhog Days, but striking coincidences do occur. This can be viewed in light of the extraordinary fight of the people of Ukraine defending themselves from the brutal destroying the unprovoked aggression against their country by the war criminal Vladimir Putin.  The past is relevant for appreciating the present defense in two ways: the move of thousands of volunteers from around the world to be on the right side of history and defend the country from the Russian attack; and the memory of a small country, eighty years ago, defying the unprovoked aggression of a larger one.

An anti-fascist slogan has become significant in this crisis over Ukraine. The declaration, “They Shall not Pass,” was first used in June 1916 during World War I by French military commanders, General Robert Nivelle and then General Philip Petain, who benefited politically from his association with the use of the phrase, leading him to be proclaimed head of the Vichy regime in 1940. It was however during the Spanish Civil War, 1936-38, that the phrase first became politically important.

A military junta of Spanish generals, led by Francisco Franco and Emilio Mola, the chief planner, on July 18,  136 invaded the Spanish mainland from Morocco to overthrow the elected the government of the Second  Spanish Republic, a popular front government of republicans and allies, including socialists, Communists, Catalan and Galician nationalists.

The nationalist junta was aided with weapons, soldiers, and air support from Nazi Germany, Fascist Italy, and Portugal. Memorably, the German air force with some Italian aircraft, levelled the Basque town of Guernica on April 26, 1937, an event immortalized by Picasso. The conflict led to death of more than 200,000, to systematic killing, torture, and displacement of millions of Spaniards, some 500,000 of whom fled to France were interned in camps, while other states closed their borders.

On July 19, 1936 Dolores Ibarruri Gomez, known as La Passionaria, The Passion Flower, a fiery Spanish Communist, spoke on Radio-Madrid, in an impassioned speech calling on all to fight against the forces of Franco and against the ideology of Fascism.  She declaimed, “The whole country cringes in indignation at these heartless barbarians that would hurl our democratic Spain back down into an abyss of  terror and death.” She denounced the Franco forces as barbarians, enemies of civilization.  “Young men, women, all workers, all anti-fascists must unite in the battle in the struggle against the fascists.  They shall not pass.”

Her motto, No pasaran, immediately became the motto of the anti-fascists everywhere,  including the Cable Street Battle in east London against the British Union of Fascists in October  1936. It also led to the formation of the International Brigade, an organization of foreigners who went to Spain to volunteer to fight  for the Republic.

The democratic Western powers, the U.S., UK, and France recognized the Republican government as the official ruler of the country, but all, fearing Nazi reprisal, had an official policy of non-intervention. The official government could not obtain weapons except from the Soviet Union and Mexico. However, help came from citizens throughout the world. The idea of an International Brigade of volunteers originated in Moscow by Maurice Thorez, head of the French Communist party, and Willi Munzenberg, German communist, chief of   Comintern (Communist International) propaganda for Western Europe.

As a result, a sizable group of volunteers heeded the call, many if not most were recruited from communist organizations: more than 35,000 from 53 countries came to fight against fascism in Spain, and who were integrated in the last year of the war into the Spanish Republican army. This international brigade, anti-fascist was leftist in various ways.

The story of the brigade had been told in fact and fiction. Most compelling is Homage to Catalonia by George Orwell , himself not only a journalist but a volunteer who joined the POUM faction of the Brigade, that was composed of different groups.  Orwell recounts the factional quarrels, the serious differences between the individuals who belonged to different political parties, bur who were all anti-fascists.

The International Brigade was dissolved on September 23, 1938, by Juan Negrin, Spanish prime minister until March 1939.  Two months later, on November 15, 1938. La Pasionaria speaking in Barcelona said to them. “Comrades of the International Brigades. Political reasons, reasons of state, the welfare of that same cause for which you offered your blood with boundless generosity, are sending  you back, some to  your own countries and others to enforced exile.  You can go proudly, you are history, you are legend.”

The legend has become reality, On February 27, 2022, Ukrainian President Volodymyr Zelensky invited all foreigners wishing to join the resistance against the Russian aggression against Ukraine and wanting to protect global security, to join the ranks of the Ukrainian territorial defense forces, a separate unit is being formed from foreigners, an International Brigade, for the defense of Ukraine. This would be a key testimony of support for our country against the Russian invasion of Ukraine, which is the beginning of a war against Europe.

The invitation is not so much for individuals with specific political views or with military training, unlike the 1936 situation in Spain where the volunteers were committed leftists, individuals with strong political partisan views.  There is no collection of left wing intellectuals, or experience political warriors. The new International Brigade is composed  of mostly  militarily unskilled volunteers who come from countries  whose governments  do not want to be  directly involved with personnel in the fighting.  They  are affected by the images of school children and innocent civilians being slaughtered indiscriminately with no military objective, and perhaps a taste for justice and democracy. The Ukrainian embassy in London reported that among the first volunteers to join the International Brigade were  a night club worker, a boxer, and a pizza maker. This is typical of the fact that the volunteers are mostly unskilled in military  matters and in the use of weapons, to which they are unaccustomed, though a minority  have Ukrainian roots or are  military veterans. Many volunteers come from NATO countries,  including the U.S., which have made it clear they will not send troops of their own armies to Ukraine.

A legal problem has arisen to some extent and lacks a clear answer. Is it legal for individuals to fight in or with foreign armed forces?  It is memorable that in January 1940, President F.D. Roosevelt announced that Americans, willing to fight Nazi Germany, would not lose their citizenship if they volunteered to join a foreign army, so long as they did not take an oath of allegiance to that country. However, but British authorities took a more stringent view of British volunteers in the Spanish Civil war and later in the Syrian civil war.  Other countries, Latvia, Germany, Canada, have removed any ban on citizens willing to fight for other countries. What is important in the present case of Ukraine is that so far about 20,000 from 52 countries have volunteered, and that this group constitutes the most significant International Brigade since the Spanish Civil War.

Almost the whole world, non-Western as well as the democratic West, has appreciated the heroic Ukrainian defense against overwhelming numbers of Russian aggression. It may be compared to events of eighty years ago when a small country defied the plans of an aggressive dictatorial leader of a large country for a quick and emphatic victory and for the acquisition of substantial territory.

In November 1939, three months after the start of World War II, the forces of Joseph Stalin tried to seize Finland.  However, the Soviet force of more than a million was resisted by Finland for three months and suffered more than 300,000 casualties including 126,000 dead and lost 3,500 tanks and 500 aircraft. Finland fought back and refused to capitulate to the Soviet Union, losing about 26,000, of its force of 300,000.  Finland had  refused Stalin’s demands to give up territory which was wanted to expand the territory of the Soviet Union westward. In the fighting Soviet troops, in addition to casualties, the  troops lost their vehicles, tanks, and equipment due largely to the tactics of Marshall Carl Gustaf Mannerheim, and to the efficiency of the Molotov cocktail which Finland pioneered.  The poor performance of the Soviet troops during this 1939-1940 war may have influenced Adolf  Hitler to attack the Soviet Union.

The overwhelming numbers of the Soviet Forces finally prevailed over the Finnish, but Finland remained as an independent country with its sovereignty intact.  The parallel with the present is clear as Ukraine with its extraordinary resistance, helped by the International Brigade, tries to repel Russia as Finland had done and remain independent.  The International Brigade has sent the message to Putin, “You shall not pass.”